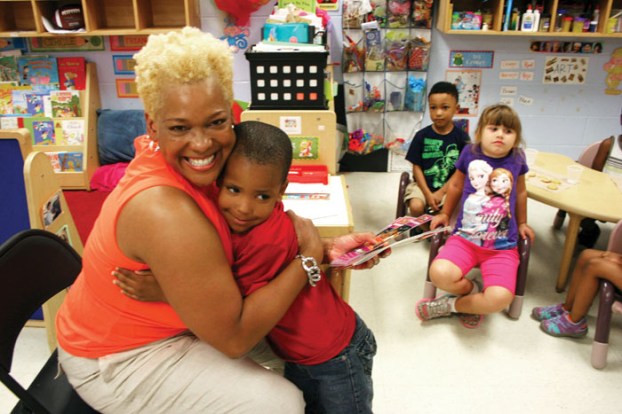 Jacqueline Kennedy hugs her nephew, Bryce White, after reading to his class on a Friday afternoon in 2015. Susan Shinn / for the Salisbury Post.

Meet Pat. And her cat Mat. Pat’s mom loves to sing scat. Sounds like the makings of a good children’s book? Absolutely.

“Shoop Do-Bee Doop” is a rhyming book for young readers, and its author, Jacqueline Kennedy, was on hand Friday afternoon to read to several classes at St. John’s Child Development Center.

Kennedy has been an actor, producer and director in New York City for the past 20 years, and she can now add author to her resumé. Her parents are City Councilman Pete Kennedy and wife Hazel. Her nephew, Bryce White, 4, attends St. John’s CDC, thus the reason for yesterday’s visit.

But the inspiration for her book is right here in Salisbury — her mom, to whom she dedicated the slim volume.

“She was a first grade teacher who taught constantly,” Kennedy said, and she’s the type of woman who still looks for teachable moments.

“Shoop Do-Be Doop” is the first release of Kennedy’s Scoonaroona series — her pet name for her nieces and nephew, she said. Readers can look forward to “Jake Who Bakes” and “My Wet Pet,” in which a little girl gets on a jet to take her pet to the vet and … well, you get the picture.

Kennedy gained fans Friday among the CDC children and staff.

“Hello! How are you all?” she said to children in Bryce’s classroom.

“Do you know me?” she asked Bryce, and he nodded with a shy smile. After his teacher, Pam Baugh, said it was OK, he gave Kennedy a hug after she read her book.

In every classroom she visited, Kennedy read with flair.

“We have a book center,” one of the children told Kennedy.

Of course, since the book is about Pat’s cat Mat, Kennedy asked the children about their pets — and they were happy to share.

“I got a dog, and I got a cat,” Katelyn Cagle said, launching into a long story about each.

Kennedy gave each child a laminated bookmark with her picture, the Scoonaroona Books logo, and her website address (www.thekennedyproject.com). Illustrated by Marcus Williams, the book is available from Amazon in paperback and Kindle formats.

Bryce got to give out the bookmarks to his classmates, even though he first headed straight to their cubbies.

Kennedy and his wife both wore big grins, both bursting with pride. You can’t help but smile at this fun book, with all its easy rhyming words.

“We do stories in here,” said Kristy King, a teacher in the 5-year-old class. “They love to be read to. Right now, we’re learning sight words, so books like this are great.”

“She chose a good book for the rhyming,” Jennifer Mauro said. “That’s what children ages 4-5 really need, and there aren’t really any new books like that coming out. Children love animals, and I think she did just great.”

Kennedy plans book signings now that “Reflective Mind” has concluded. This weekend, she was headed for a family reunion in Goldsboro, where one of her characters, Aunt Bessie, just might show up.

WASHINGTON (AP) — The Supreme Court declared Friday that same-sex couples have a right to marry anywhere in the United... read more