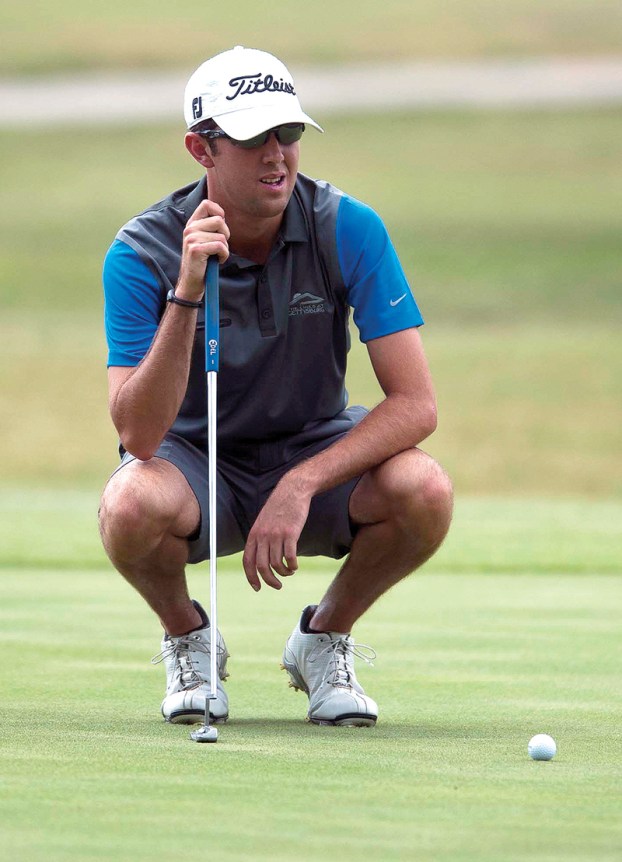 JON C. LAKEY / SALISBURY POST Defending Champion Matt Hardman on the fourth green Friday in the first round of the Rowan Masters. Thirty-two golfers kicked off the opening day of competition at the Warrior Golf Club.

CHINA GROVE — The opening round of the 13th annual Rowan Masters Golf Tournament Friday afternoon had a definite youthful flavor but don’t count out the old guard just yet.

The field of 32 in the three-day, match-play tournament at Warrior Golf Club was cut in half with nine of the surviving 16 players being college or high school players. Leading the way were defending champion Matt Hardman, who just finished his career at Catawba College, along with rising prep sophomore Michael Childress of Cannon School, who was co-medalist in qualifying for the event with a score of 69.

The impressive performances by the younger players got the attention of seven-time Rowan Masters champion Keith Dorsett, who shot a 69 in qualifying as well and won his opening match 4-and-3 over David Miller.

Admitting that he was closing in on age 40, Dorsett said he wanted to make a statement for the veteran players.

“I look at the board and so many of the winners are in their mid to late teens or early 20s,” he said. “You have to do something to get your game together and play with these kids.”

Dorsett has well over a decade of success in many local golf events including the Rowan Masters, the Horace Billings Rowan Amateur and the Labor Day Four Ball tourney. He knows what it takes to succeed.

“It is not really about playing golf, it is more of an endurance test to try and finish a match,” he said. “You have got to focus on yourself and play the golf course.”

The endurance test will require the eventual winner to play as many as 72 holes over the next two days of match play with the finals set for Sunday afternoon beginning about 12:30 p.m. The round of 16 and quarterfinals will be decided Saturday beginning at 8 a.m. then semifinals start at 8 a.m. Sunday.

From a seeding standpoint, the favorites dominated for the most part on Friday, most by a large margin. One of the more dramatic finishes was a rally by Richards, seeded 14th, to come from two down with three to play to 19th-seeded Brian Hewat on the final hole of the day. Richards drilled a five-foot birdie putt on the 18th hole to win 1-up and advance to face Dorsett in the next round.

More typical results were the 7-and-6 win by Hardman over Chace Jensen with five birdies, and a dominating 8-and-6 win by 15-year-old Childress who won the first five holes over Brandon Cranfield and never looked back.

“I played really well today and hit some good shots,’ Childress said. “I was hitting fairways and giving myself a chance on every hole.”

The winning veterans on Day 1 included last year’s runner-up Justin Lefler, who faced his friend Seth Waller and prevailed by a 7 and 6 score.

“Seth is a good friend of mine and I did not look forward to playing him since we qualified together, and I convinced him to play this year,” Lefler said. “But I am happy with the way I started, and I got sharper as the round went along.”

Lefler will now play Chris Owen, a 7-and-5 winner over Sean Cramer. Other first day winners advancing were No. 8 seed Josh Brincefield, No. 17 seed Derek Lipe, and No. 18 seed Bubba Hendren.

No. 8 Josh Brincefield vs. No. 9 Andrew Purcell

No. 2 Michael Childress vs. No. 18 Bubba Hendren