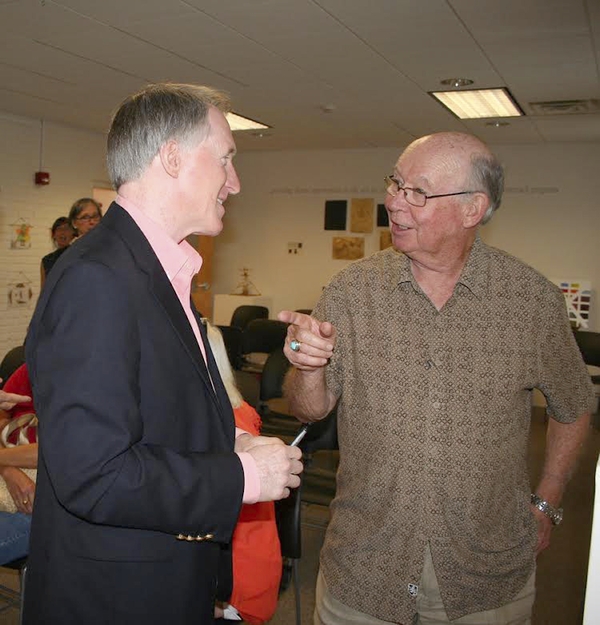 Scott Mason talks with Bill Hall. Mason and Hall’s son play in an over-40 hockey league in Raleigh. Susan Shinn/For the Salisbury Post Scott Mason autographed a book for Greg Alcorn. ‘Please save me a hotdog from Hap’s Grill!’ it reads in part. Susan Shinn/For the Salisbury Post

Mason, with more than 30 years’ experience in broadcast journalism, hosts the “Tar Heel Traveler” feature, which runs four nights at week on WRAL in Raleigh.

On Wednesday, Mason shared some of his favorite sports-related features at a Lunch and Learn session at Waterworks Visual Arts Center. Mason’s presentation was in conjunction with the Smithsonian Institution’s traveling exhibition, “Hometown Teams.” That exhibit includes a showcase of Rowan County sports by local photographer Wayne Hinshaw.

Mason and his videographer travel the state’s back roads in search of interesting stories — and he’s found plenty. Mason said that at last count, those features numbered 1,407 over his eight years of adventure.

All sorts of good smells permeated the room, as nearly 24 attendees noshed on a variety of lunches.

“I always knew what I wanted to do, even as a kid,” he said.

Mason eventually made his way back to his native Raleigh, where he became WRAL’s documentary producer. When that stint ended, the station asked if Mason would like to revive the old Tar Heel Traveler series.

Mason said that he and his videographer have roamed the entire state in search of stories.

“It’s demanding,” he admitted. “We’re on four nights a week. But it’s totally unsupervised. The station has no idea where we are.”

Mason finds people, places and landmarks. His stories are funny, witty and poignant.

“We’re all over the place,” he noted.

At Waterworks, Mason showed clips of sports stories he’s covered over the years. There was Lefty Freeman, a graduate of N.C. State who once faced Babe Ruth from the pitcher’s mound.

In the clip, Freeman remembered, “He fell to the ground like somebody shot him. That was a real joy to me, that he missed that third strike.”

“That kind of story makes you smile,” Mason said.

He’s profiled Dolly Vanderlip, a member of the women’s professional baseball league on which the 1992 movie, “A League of Their Own,” was based. He featured black baseball players from Hertford County, known as “The Corn Field Boys,” who defeated players in the Negro League.

He profiled Willie McCray, who’s been caddying at Pinehurst No. 2 for some 70 years now. He talked with golfer Brad Clayton, who lost an arm, but keeps on swinging with the help of a custom prosthesis.

“I never get tired of watching that highlight,” Mason said.

Mason traveled to Charlotte to the NASCAR Hall of Fame, and shot a story about the 1979 fight between Cale Yarborough and Donny Allison at the conclusion of the Daytona 500. It was the first race that had been nationally broadcast, and the melee propelled NASCAR into the national spotlight.

Mason tries to build a stockpile of stories. When he and his videographer travel, they often shoot up to nine stories over two days. It typically takes a couple of hours to film a story, he said.

“You never know what you’re going to find,” he said. “Sometimes, you just have to play it by ear.”

When he first started Tar Heel Traveler, Mason said he wondered if there were enough stories out there. Turns out, he was inundated with ideas.

“I can’t get to all the stories,” he admitted. “They just avalanche in.”

Mason is proud of what he does.

“We’re telling these people’s stories that otherwise wouldn’t be told,” he said. About every quarter, WRAL airs a “Tar Heel Traveler” half-hour show, in which Mason typically compiles segments around a theme.

“Our features are lighthearted, but with meaning,” Mason said. “I look for themes of dedication, endurance, commitment and loyalty.”

Mason grew up playing hockey, and still plays in an over 40-league in Raleigh. He did a story on Bob Baker, a member of the 1948 Olympic hockey team.

“He was one of the finest men God ever made,” his widow remembered in the clip.

Mason concluded the hour with a clip on the NSSA Hall of Fame in Salisbury.

Greg Alcorn catches the “Tar Heel Traveler” when he goes to Raleigh to attend State Board of Education meetings.

Mason signed a book for Alcorn.

“Please save me a hotdog from Hap’s Grill,” it read in part.

“I thoroughly enjoyed the presentation,” Bob Setzer said. “Most of the stories were things I’d never heard of.”

Clearly, Mason has enjoyed covering these sports stories. So much so, that his third book in the Tar Heel Traveler series will be about sports.

You can view Tar Heel Traveler episodes at www.wral.com .

Deadline for Posters is 5 p.m. • Canceled: Love Christian Center Community Day scheduled for Saturday. The Community Day will be rescheduled. For... read more