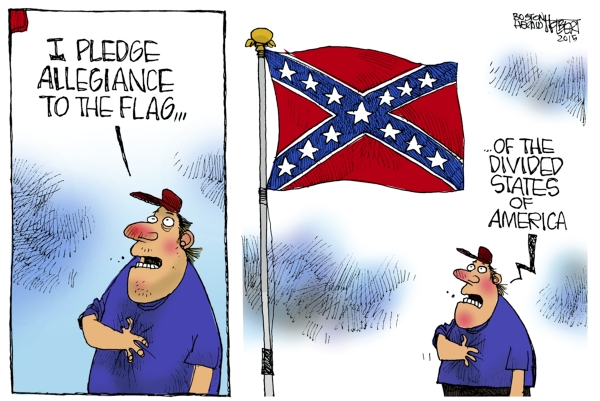 The flag was put in place on the capital building in S.C. in 1961 as a response to integration and the dismantling of Jim Crow in the South. It was not about heritage but racism. I had family that fought for the South I am proud of my heritage, but the context under which this flag was raised was not about history or heritage. Take it down and move on. That being said I do feel that this debate could have waited until there was time to honor and mourn the gentle, welcoming souls that were gunned down by a hate-filled fool.

Slavery is over; except in some Communist countries and some Muslim countries, which you are welcome to take up with them if you like… I don’t like any of them anyway.

Carter and Clinton were our last two presidents who embraced the Confederate flag. If this flag only represents “racism,” and nothing more, you might start this “different kind of conversation” with something like “Carter and Clinton were racists, so we apologize that we voted for them.” I’ll reply with “I voted for neither one, because neither was any good anyway.”

To keep dragging this issue up borders on lunacy. It is like picking a scab off a wound. Try as you will you can relive history and you certainly cannot rewrite it. It is what it is.

Would you say the same thing if it were an African-American, Hispanic or Arab-American young man? Be honest.

It’s time for the Democratic Party — founded by Jackson, who pushed the Cherokee, Choctaws, and Creeks out of the South — to apologize.

It’s time for the Democrats – who were the sole party to approve secession, who established the Confederacy, and who fought to keep slavery alive and well – to apologize.

It’s time for the Democrats – who marched under the Beauregard battle flag (the so-called Confederate flag) in the Civil War, in support of “The Cause,” in the white supremacy movement, in the founding of the KKK, in opposition to civil rights in the 60s – to apologize.

How about it coming from that Obama fella?

… Hints of hope, pushing back against gun fundamentalism

Killing innocent people is wrong. Preventing criminals and crazies from killing the rest of us is right. Now all we have to do is come together as a thinking, civilized community and come up with ways to do that.

So long as liberals continue to agitate and disrupt, we will never “come together” on anything.

I find it rather telling that in the same puff piece that mentions the tragedy that occurred in Charleston, you voice support for a Jim Crow system of arbitrary pistol purchase permits that grew directly from the racist Southern past that you seem to loathe so much. The pistol permit was designed specifically to prevent blacks from having concealable weapons with which to defend themselves from the likes of the KKK.

Even today, while hiding behind the veneer of “safety” with the fascist nod to “Sheriff Knows Best” the pistol permit is an abhorrent system where the sheriff can deny anyone simply based on “gut feeling” or lack of “moral character.”

I can only hope that the criminals will continue to get that all important pistol permit before they head off and commit their crimes.

Interesting how liberals call the advocacy of choice of when and where to bear arms, wherever one has legal recourse to be, “forcing.” Normal people call forcing someone to be disarmed tyranny and bigotry. … It is time to stop the insane liberals from disarming victims because they fear the armed citizen. It is time to stop the bigots. Be pro-choice on all rights, not just the ones you like.

Obama Derangement Syndrome: The acute onset of paranoia in otherwise normal people in reaction to the policies, the statements — nay, the very existence — of Barack Obama.

Kaye Brown Hirst is such a gem in our community! We are blessed to have her.

Kaye is a wonderful person with a huge heart! She touches everyone she comes in contact with wherever she goes!

A flag or a statue is not the answer. We need to get back to putting prayer back in school, teach about the love of God and his mercy. All this stuff about blacks and whites is doing nothing but putting ideas in people’s heads about evil thinking.

We need God back in our churches, in our homes, in our communities. These people are evil that are doing all this killing, drugs and trouble making. Wake up, America. The preacher is just another man who sins like the rest of us.

… Letter: Getting rid of symbol will not get rid of hate

Overlooked until recently is that American slavery in any form officially ended in 1942 with the first conviction under Circular 3591 of the Franklin D. Roosevelt administration. It enforced the Anti-Peonage Law of 1867 by criminalizing the impressment of labor on Southern African Americans. This ended the practice of imprisoning black men on trumped-up criminal charges for use as free labor.

If you knew what you were taking about you would understand that submachine guns are illegal, so why would an insurance company insure it? Maybe you need to educate yourself before you come up with plans to fix a problem that doesn’t exist.

This is for the safety of the motorists and pedestrians as well. There is no safe place to stand on this bridge.

I’m surprised that no one has been hit or killed.

…. including eligible college students who are not able to get to the polling place in their registered precinct. It is blatantly unconstitutional to pass any law making it impossible for them to vote by absentee ballot like all other eligible voters have the right to do. Age discrimination in one of its clearer forms. “We don’t like the way they tend to lean politically, therefore, we will make it so difficult to vote they won’t have a reasonable chance to do so!”

Voter fraud is rampant. It’s so obvious. How else could you explain so many frauds being elected to office in North Carolina?

… Discount store will be at Shoppes at the Summit

Now if we could get better customer service, more people might do their shopping in Salisbury.

We need a Ross store and a Food Lion over there.

I thought Bath & Body Works was moving over there, but it isn’t listed in the Phase 1 stores. I sure hope they remain in Salisbury after their lease runs out with West End Plaza.

Too bad a Macy’s and a Trader Joe’s won’t open there. There are enough discount stores in Salisbury.

Why can’t Salisbury get all new things in there, like a Target, Best Buy, HHGregg, PF Changs, you know … different stuff?

I’ve been in a 5 Below before. Think of it as a Hot Topic and a Dollar Tree having a child together.

Any word on the possibility of a Target?

… HIllary is so yesterday

Hillary is a joke. Did nothing as secretary of state. Had to apologize for lying about taking on fire. Was given a free pass to use her personal email for government work. She is riding on her husband’s political coat tail. OK I’ll stop. Lol Hillary’s a joke. Get a real candidate and not the wife of a has been.

Typical right-wing bashing. Say something positive about your candidate, or haven’t you decided which of the passengers on that clown bus tickles your fancy?

God has turned this mess into a blessing. Love outweighs all things

“The man who is responsible for this senseless act of  violence wanted to start a race war, and what he... read more