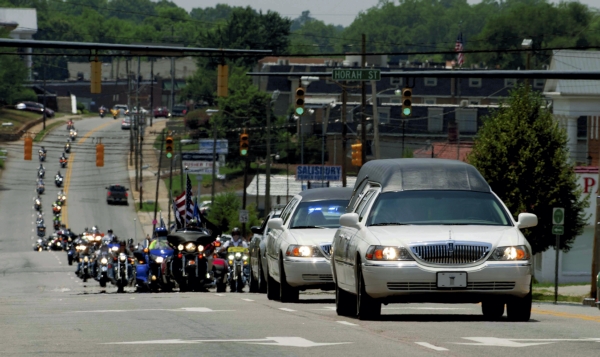 SALISBURY — People along the route seemed to appear out of nowhere, emerging into the heat of a 90-degree day to take a few respectful minutes to welcome Chief Master Sgt. Edwin E. Morgan Sr. back home.

They held signs and American flags. Veterans stood at attention and saluted, while other folks — young and old — positioned hands over their hearts. They waited at Interstate 85 overpasses, or on the streets of downtown Salisbury. They strolled out from businesses and homes along U.S. 52 to catch a glimpse of the rolling procession of mostly motorcycles that took a good four minutes to pass from front to back.

Again, it was just a way to say welcome back.

A casket bearing remains of airman Morgan, who died March 13, 1966, when the AC-47D aircraft he was on went down in a mountainous region close to the Vietnamese border in Laos, was brought home to Rowan County Thursday by his family and a lot of friends.

The crash site of Morgan’s gunship wasn’t located until 1997. Four joint teams from the United States and Laos excavated the site between 2010 and 2014 and were able to recover sparse remains. Those remains were 100 percent verified later as belonging to two of the seven crewmen, and Morgan was one of those men.

His surviving daughter, Frances Morgan Morris, and son, Eddie Morgan Jr., flew on a commercial flight to Hawaii earlier this week to retrieve their father’s remains and fly back with his casket.

Their flight arrived in Charlotte at about 11:20 a.m. on Thursday. Along with state highway patrolmen, the Rowan Sheriff’s Office and the aid of law enforcement along the way, a procession dominated by more than 110 motorcyclists from the Patriot Guard, Rolling Thunder and Sons of Soldiers escorted the hearse and two family cars from Charlotte-Douglas Airport.

In reaching Salisbury, the procession traveled onto Jake Alexander Boulevard to South Main Street, then took a route through the downtown (Fisher, Fulton and Liberty streets) that eventually brought it up North Main Street for a left turn at the Square and the last leg to Rockwell.

A tired Morris and Eddie Morgan Jr., who had been traveling since Wednesday afternoon Hawaii time, said they were touched by seeing so many people along the entire route.

“It’s just very overwhelming,” Morgan said. He was especially taken aback by all the familiar faces from the car dealerships who lined Jake Alexander Boulevard. Morgan works for the parts department at Gerry Wood Honda.

Edwin Morgan Sr.’s wife, Beth, who died in 1983, was two months pregnant with Eddie Jr., when her husband’s plane was lost in 1966. Frances Morris was only 6.

“I think it’s great that all these people came out to welcome my dad,” Morris said. “He got the welcome home he deserved, just long overdue.”

Officials at Hickam Air Force Base in Hawaii took Frances and Eddie to a conference room where they watched a film and were walked through the process the Department of Defense POW/MIA Accounting Agency used to identify remains of missing soldiers in wartime and help families find more closure.

They learned about the forensic testing done and spoke with a dental expert, the specific science that was important in being able to identify their father. The remains of Edwin Morgan Sr. were mostly dental-related, and those small amount of remains were laid out on a blanket with a new Air Force uniform hanging close by.

Morgan and Morris were left to be by themselves for awhile in the room with their father and that uniform. It would turn out to be the most emotional time for Frances.

She said she was under control until a woman official walked back into the room and asked, “Are you OK?”

“When she asked me that, I lost it,” Morris said.

The POW/MIA Accounting Agency says there are 1,627 American service members still unaccounted for from the Vietnam War. Eddie Morgan Jr. said they learned the military is still actively seeking missing servicemen from as long ago as World War II, and with advances in forensics, they are even beginning to put names to remains from Pearl Harbor that have not been identified in more than 70 years.

Frances and Eddie Jr. said it means everything to them that the military would not give up looking for their father.

“I just wish they could do it for all the families,” Morris said.

The new Air Force uniform was placed in the casket with their father’s remains.

Eddie Morgan said the whole trip back from Hawaii to the funeral home in Rockwell was filled with people giving of their time. At the Atlanta airport, where the flag-draped casket had to be moved from one Delta plane to another, a five-person honor guard led by customer service agent Brian J. McConnell helped with the transition.

“I was just amazed by that,” Morgan said.

The Delta pilot for the Atlanta-to-Charlotte leg of the trip also spent considerable time on the tarmac with the family as the casket was placed into the Powles Funeral Home hearse.

The long procession from the airport included two family cars behind the hearse. Frances and her daughters, Lisa and Kim, were in one car. Eddie, his wife, Amanda, and his 16-year-old son, Scott, were in the other car.

CW Smith organized the motorcyclists from the Patriot Guard, six members of whom served as pallbearers to carry the casket into the funeral home.

“I believe in seeing everyone come home,” Smith said, adding that 41 from North Carolina still have to make a similar trip back from Vietnam.

Smith wasn’t surprised at all the people who were showing their respect along the long route.

“You always see patriots come out,” he said.

There will be a visitation from 5-9 p.m. today at Powles Funeral Home, followed by an 11 a.m. funeral Saturday at First Baptist Church in Rockwell, followed by the burial at Brookhill Memorial Gardens.

Hack Cook traveled from Midland in Cabarrus County and watched Thursday’s procession from the Square in Salisbury.

“We left a lot of them over there,” Cook said. “A lot of people don’t care about this, but whenever we do get to bring one home, it means a lot.”

Cook said he was spit on at the Atlanta airport when he came home from Vietnam.

Traveling from Greenville, S.C., Tom Austin spent Wednesday night in a Salisbury hotel so he could be here for Thursday’s procession. The world War II veteran said his son was one of the Patriot Guard riders.

“I think it’s an honor,” Austin said of holding an American flag and paying his respects as the procession drove by.

A group of four Vietnam veterans — Wayne Hinson, Wayne Smith, Troy Horton and David Smith – stood on an opposite corner of the Square and waited for Morgan’s casket to go by.

“Why wouldn’t I?” asked Troy Horton, a Navy veteran who served in Vietnam during 1967-68. “… The shame of it is, there are so many there that we’ll never get back.”

“If anyone ever deserved it, he did,” David Smith added of the special escort for Morgan Sr. Smith served in Vietnam for a year, 1964-65, as part of the Army Support Group, when U.S. forces were still characterized as advisors.

“I guess we’re here to give him a big welcome home,” said Wayne Smith, part of the Army’s Strategic Communications Command in Vietnam during 1967-68. “You’re supposed to bring them home.”

That sentiment meant a lot to the Vietnam vets. David Smith said the recovery of Morgan’s remains and not giving up on that task was important. “The persistence is the story here,” he said.

Horton added, You don’t leave a vet behind. You don’t give up an any vet.”

The men shrugged off the heat.

“I figured it wasn’t going to be that hot up here,” Hinson said.

“It was hotter in Nam, wasn’t it?” Horton said with a grunt.

“Yeah, and they were shooting at us,” Hinson said.