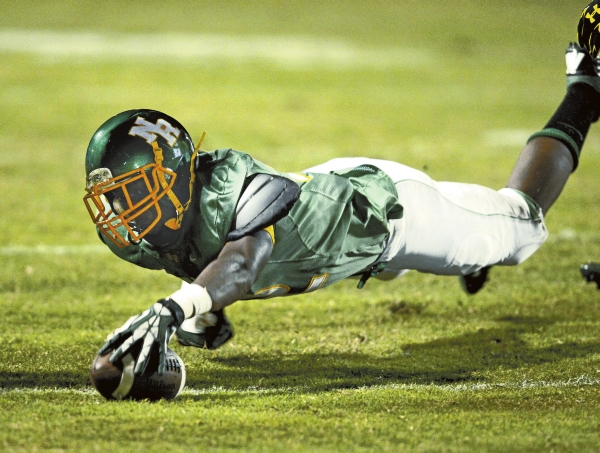 SPENCER — All but one award — camp MVP — had been handed out, and the DeBoses were about to depart the National Underclassmen Combine Ultimate 100 football camp in Georgia and head for home.
“And then we hear the words ‘and from North Rowan High School,'” Lorenzo DeBose said with a laugh. “My first reaction was, ‘Wait a minute. Whaaaat?'”
Camp MVP at the prestigious NUC regional for 100 elite prospects from all over the Southeast was just one more electric moment in a rewarding spring and summer for North Rowan rising junior Zion DeBose.
“It’s been nothing but hard work and great news the last few weeks,” said DeBose, taking a brief break from lifting weights with his Cavalier teammates on Wednesday.
Lorenzo DeBose, a counselor and psychologist, hails from Texas. His wife, Jill, a teacher of exceptional children, is originally from Philadelphia.
Fortunately for North Rowan football, they both went to college at Livingstone. They met, they married, and they are raising their family in Rowan County. Jill searched diligently for a distinctive Biblical name for their first child. She came up with Zion Paul DeBose.
Now Zion is 16 and he’s getting college football coaches excited.
He has height (he’s been measured anywhere from 6-foot-1 to 6-4 at combines, although 6-2 is probably accurate) and a strong, lean frame (212 pounds now, but he could easily handle 25 more). He has run a 4.65 40-yard dash, although he usually is timed between 4.7 and 4.8.
There are a lot of guys out there with measurables similar to DeBose.
What separates DeBose is extra-long arms, tremendous explosion off the ball and great grades. He’s an exceptional student with a GPA in the 4.0 neighborhood. He wants to study architectural engineering.
“Grades have always been first with my parents, and grades are the first thing every coach has talked to me about,” DeBose said. “Character second. Football third.”
Zion was successful in youth football, but as a seventh-grader he was still a chunky offensive lineman.
“He was 5-foot-6 and 198 pounds,” Lorenzo said. “But he’s always worked hard. He’s always been a self-motivated kid that jumps in there and does what he’s supposed to do.”
The growth spurt and a physical transformation started in the eighth grade.
“I’ve known Zion since he was 2 or 3,” North Rowan assistant coach Rodney Goodine said. “Little, chubby kid, but then he got taller. And as he got taller, he got more physical.”
As a varsity sophomore defensive end last fall, DeBose was part of North Rowan’s strongest position group. He contributed seven sacks, 20.5 tackles for loss and 19 quarterback hurries.
“We’ve got a coach (Steve Williams) who does a great job with our defensive linemen,” Goodine said. “He’s taught Zion proper technique, and Zion understands how to use his hands and how to use his speed. Depending on how much weight he adds, he’ll be a very good outside linebacker or a very good rush end.”
Division I college coaches started appearing regularly at North Rowan in the spring months, all bearing personal invitations for DeBose to attend their football camps.
“I’ve been to a camp just about every weekend and sometimes two camps,” DeBose said. “I went to North Carolina’s camp (from noon until 3:00) and Duke’s camp (from 4:00 to 8:00) on the same day.”
DeBose remembers the thrill of his first official offer. It came in May from East Carolina. Other offers have followed from Duke, North Carolina, N.C. State and Charlotte. More are sure to come. They’ve loved him at every camp he’s attended.
“The offers have been kind of rolling in,” DeBose said with a smile. “I don’t have a favorite school. My parents have told me to keep an open mind and I have.”
DeBose attended the NUC showcase in Mooresville in March, wowed people and got favorable publicity that led to his participation in an Asheboro camp in mid-May. He was named Defensive Line MVP at that camp.
That honor led to an invitation to the NUC regional camp in Georgia.
“There were bigger guys there than I was used to seeing,” DeBose said. “Boys from Florida. But I guess I did OK.”
Next for DeBose is the NUC national camp in July in Texas.
Zion has become a big deal in a hurry. His parents aren’t shocked, but they had not anticipated traveling to a camp in Texas. They will be raising funds and they welcome sponsors.
His parents — and his coaches — will keep Zion grounded as he adjusts to an expanding world of educational and football opportunities. Penn State and Clemson are in the picture. Even Notre Dame and Florida State have expressed interest in recent days.
“Zion should have a great junior season and it should take two men to try to block him,” Goodine said. “Until then, he’s the kind of kid that’s going to keep working.”

By David Shaw sports@salisburypost.com SALISBURY — The mercury continues to soar at Newman Park. First-place Rowan County made sure of... read more