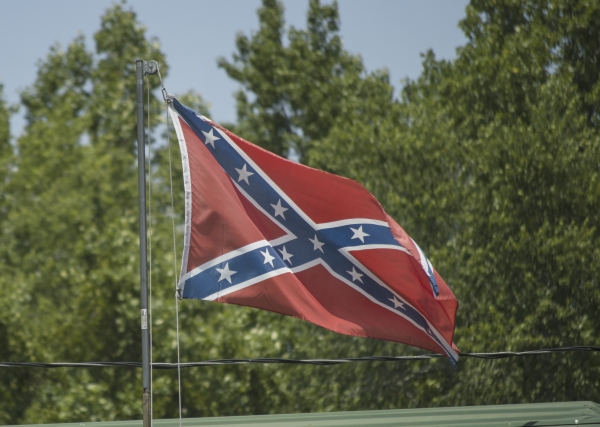 Josh Bergeron / Salisbury Post - A confederate naval jack waves in the wind beside a home on Stokes Ferry Road outside of Salisbury. Debate over confederate flags and license plates have sprung up in weeks following a shooting in Charleston S.C.

The Department of Motor Vehicles says it has issued more than 2,000 of the specialty license plates, which were created for the Sons of Confederate Veterans. The license plate features the flag — a field of red with crossing blue stripes and white stars — on one side. On other side, the letters “CV” — for Confederate veteran — are featured.

Reaction to the Confederate symbol’s debate is mixed among Rowan residents and leaders.

Salisbury-Rowan NAACP President Scott Teamer said the flag’s removal from society may be a step in the right direction, but it won’t eliminate racism.

“Let’s put everything in the proper perspective,” Teamer said. “The flag hasn’t shot anybody. It represents insensitivity, it represents white supremacy, and the fact that it can be erected among a multicultural nation regardless of others people’s opinion shows what kind of society we live it today.”

He said the flag is a part of America’s history for better or worse. However, history belongs in a museum, Teamer said.

N.C. state legislators could soon be faced with a decision about removing the Confederate flag from society. McCrory’s request would require action from both houses of the legislature, according to a spokesperson for McCrory. The intent of the request, according to McCrory’s office, would be to phase out the license plates and not allow renewals.

All four of Rowan’s state legislators returned a request for comment on the raucous debate about the Confederate flag. And each responded differently.

Sen. Andrew Brock, R-34, said legislators are and should be focused on bigger issues such as the state’s budget and growing the number of available jobs.

“I am working on issues in North Carolina, working on things like the budget and tax code,” Brock said. “I’ll do what I do best. Let’s let South Carolina do what it wants to do and let the facts settle the story, not let the story settle the facts.”

Brock said there’s been some confusion about whether McCrory could act alone and order the Department of Motor Vehicles to stop issuing the specialty plates or whether the legislature needed to take action.

Sen. Tom McInnis, R-25, said he doesn’t have an opinion on removing Confederate flags from license plates and government-owned property.

“We certainly want to be respectful of everybody’s First Amendment rights, but we also want to be mindful of things that create division within the community,” he said.

Rep. Carl Ford, R-76, said he was ill, and declined to comment initially.

“I would have to be convinced that we would accomplish something productive,” he said. “To me, it seems like political pandering and avoiding addressing the core cause.”

Law enforcement arrested Roof in Shelby one day after the shooting.

A website registered to Roof surfaced on June 20. It contained photos of Roof posing with Confederate memorabilia and a manifesto that contained explicitly racist references.

“I chose Charleston because it is most historic city in my state, and at one time had the highest ratio of blacks to Whites in the country,” Roof’s manifesto stated. “We have no skinheads, no real KKK, no one doing anything but talking on the internet. Well someone has to have the bravery to take it to the real world, and I guess that has to be me.”

Roof has been charged with nine counts of murder and possession of a firearm during the commission of a felony.

If the nation wants to rally around the church shooting, Teamer said, Americans should start by looking at their own home. And, in Rowan County, Teamer said things aren’t any better than in Charleston.

“In Salisbury, the racism and hatred is kind of deceptive,” he said. “It’s there, but it isn’t talked about. And, if we are going to have a conversation, it’s got to be a different kind of conversation.”

Editor’s note: This article has been corrected to clarify the flag pictured is the Confederate naval jack.