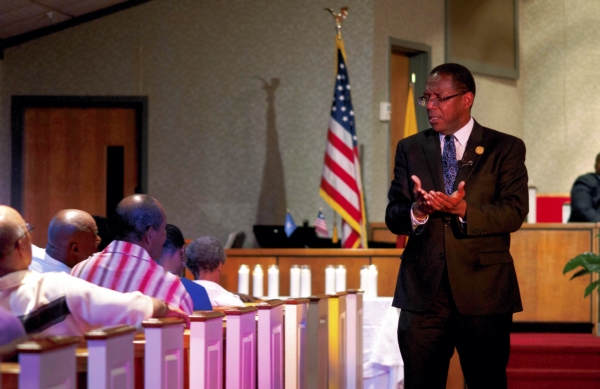 JON C. LAKEY / SALISBURY POST Rev. Curtis Gatewood, an official with the North Carolina NAACP, was the keynote speaker during a prayer service Tuesday evening for the healing in Charleston. The vigil was at Gethsemane Baptist Church in Salisbury. Tuesday, June 23, 2015, in Salisbury, N.C.

It was a call to action Tuesday evening during a prayer vigil for the victims of last week’s massacre at a historic African American church in Charleston, South Carolina.

Music and prayer filled Gethsemane Missionary Baptist Church on South Caldwell Street as those in attendance heard from several speakers about how to move forward in the wake of the attacks, which speakers called an act of terrorism.

Nine African Americans were killed the evening of June 17 at Emanuel AME Church in Charleston when a young, white-supremacist sympathizer opened fire during a Bible study at the church. Dylann Roof, a 21-year-old white man, has confessed to and been charged with the killings.

At Gethsemane, framed pictures of the victims, referred to as “the nine” during the service, lined tables on either side of a silver casket that was open. Nine candles were lit in remembrance and honor of the victims.

Inside the casket was a mirror so people could see their reflection.

The keynote speaker was Rev. Curtis Gatewood with the North Carolina NAACP. He said the attack in Charleston shows, loudly and clearly, that America “must be born again.”

“My heart is hurting,” he said.

“America must repent,” he said, adding the country needs to be re-introduced to the real Jesus Christ and not the Jim Crow version.

“How can you say you are a Christian nation when you do not practice Christianity,” Gatewood said.

Good shepherds, he said, this is your time to stand. He said the oppressed and the poor, no matter the color of their skin, are part of his flock.

He also said he’s been pondering over the talk of “forgiveness” for Roof.

Gatewood said that whenever a young African American is suspected of committing a crime, he or she is immediately labeled guilty, a criminal or a thug.

“Never will you see the media humanize a young African American male that’s been accused of a crime,” he said. “You don’t hear all this forgiveness,” when a black person is charged with a crime, he said.

“You can forgive, but you don’t have to play into the hands of the enemy,” he said.

Gethsemane pastor, Rev. Dr. C.L Phelps, said the people who gathered at his church were “here for a purpose.”

God is still alive, he said, through our struggles and through our tragedies. “As long as God lives, we will be here.”

Phelps said now is the time for people to come together.

Scott Teamer, president of the Salisbury-Rowan chapter of the NAACP, said white acts of terrorism against black people are nothing new in America.  He referenced the nation’s history of slavery and white supremacy, a history that started before the country was founded.

“We have to deal with racism on a local level,” Teamer said, adding that deception and prejudice against the African American community is prevalent in Rowan County and North Carolina. He touched on the state Legislature’s attack on voting rights and compared the Confederate monument on West Innes Street to the Confederate Flag on the grounds of the South Carolina Statehouse.

“And that statue is hurtful to black people,” he said, adding there needs to be a local dialogue about racism.

“There’s nothing wrong with telling the truth,” Teamer said.

“If you serve a powerful God, then you ought to have some courage,” he said, adding white and black people need to come together to address the situation.

“We’ve got to build a united front,” he said, “And we’re waiting on God, but he might just be waiting on us.”

Tonya Cross said the black community needs to understand its own history.

“Our history doesn’t begin with slavery,” she said, referencing the advanced civilizations that dotted Africa before the slave trade and colonialism.

She said people need to figure out how they, as individuals, can combat the injustices of our time. “We need to support these individuals trying to make a difference in our community,” Cross said.