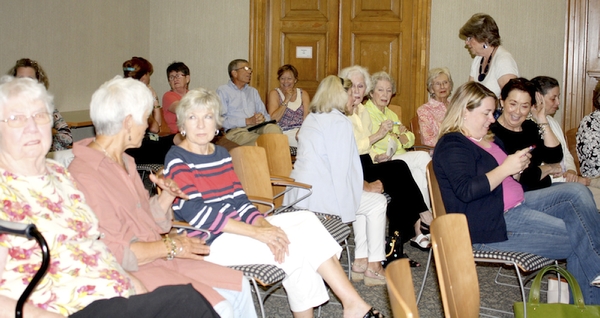 Jennifer Hubbard’s love for Jane Austen came through Tuesday night in the first discussion of the Summer Reading Challenge.

Talking to a group of mostly women — and four men — Hubbard shared her experience teaching “Pride and Prejudice” at Woodberry Forest and taking a group of 16- and 17-year-old boys to Oxford in 2001. “Most of them liked the book,” she said, and the trip was full of excitement for her. “It’s all still there, the places she lived, her museum. They are crazy about Jane Austen.”

The readers at the discussion were, too, and many had not read the book before.

As they discovered and Hubbard pointed out, “Jane (Austen) had a wicked and delightful sense of humor.” Hubbard said Austen was the person you’d want to sit by at a party to enjoy her keen observations, much like the character of Elizabeth Bennet in “Pride and Prejudice.”

Elizabeth has pride and prejudice in full measure, as readers learn. She’s quite smart and quite opinionated.

Hubbard quoted Henry James, who said, “A novel’s purpose is to help men understand their own hearts and human nature.”

“Pride and Prejudice” the novel has been around for 200 years, “because we can learn from it,” Hubbard said. Things like how not to parent a child, how to be a good friend, what sort of partner for life we should end up with.”

Elizabeth Bennet is 20 and flawed. She has a high opinion of herself. That’s why it’s so appealing.

“Think of the the times Jane uses the words see and observe.” Elizabeth comes to see herself better through the course of the novel.

Mr. Bennet has supported his favorite daughter’s superiority, indeed, enforces it. She feels superior to everyone in the house, especially her foolish mother.

“As we read, we mature with her,” Hubbard said. “We don’t realize at first that she’s wrong.”

When she meets Mr. Darcy, they challenge each other to be honest.

When Hubbard took the boys to Oxford, they all kept journals. She asked them what they thought pride means. They gave a variety of answers, including “merit through one’s own action.” She asked the readers Tuesday night, “Does pride require action or is it inherent?”

Austen used the novel as social criticism, especially of the class system in Britain. Darcy is one of the 400 or so landed gentry who ruled the land. His 10,000 pounds a year amounted to about $300,000 dollars at the time. In contrast, a simple farmer might make 15 pounds a year. Mr. Bennet made about 63,000 pounds, and he’s looked down on. Mr. Bingley, who courts Jane Bennet, has new money, made from trade, barely acceptable, except for the amount.

Mrs. Bennet had a good reason to obsess over getting her five daughters married to wealthy men. When Mr. Bennet dies, she’ll end up with only about 200 pounds a year. She loses the house and land because there are no male heirs, except supercilious cousin, Mr. Collins.

“Mr. Collins in the book is probably around 25.” Like Mr. Bennet, he is likely a second son. First sons inherit property, second sons typically enter the clergy or the military. Mr. Bennet is also a clergyman. Austen pokes fun at clerics, but Mr. Bennet is a little different. He educated his girls, though its effects on the sisters vary, from silly Lydia who is a copy of her mother, to Jane and Elizabeth, who are quite well read.

Writer Virginia Woolf said Jane Austen was the most difficult to catch in the act of genius — she’s so subtle. Perhaps the best example is the first sentence in the novel, “It is a truth universally acknowledged, that a single man in possession of a good fortune must be in want of a wife.”

That’s echoed at the end of the novel, but not as strongly. Marriage and money are linked, and human nature has not changed in 200 years. “We know that. We live in a small town, where we see small minds, little feuds and gossip,” Hubbard said. Austen loved to gossip.

Elizabeth is offended when Mr. Bingley does not offer marriage to her sister Jane, and she simply can’t deal with it when her best friend, Charlotte Lucas, accepts Mr. Collins’ proposal. But Charlotte is no snob. She’s ancient — 27 — and plain and needs the money. Austen writes, “Happiness in marriage is purely a matter of choice.”

Darcy and Elizabeth do fall in love. “The way Austen develops their romance is genius. He likes her fine eyes.” They spend a great deal of time watching each other.

As Elizabeth learns her knowledge of Darcy is biased and wrong, she realizes she is prejudiced and punishes herself. We sympathize with her. She takes on the shame and has to admit it to Darcy and her father.

While Austen uses dialogue expertly to develop characters, she rarely uses description. There is virtually no physical description of  anyone in the novel. “Does she want us to see through Lizzy’s eyes?” Hubbard asked. When she first sees Darcy’s estate, Pemberly, her description of it and the grounds is really a description of Darcy, nothing artificial or contrived.

Then she meets Mrs. Reynolds, the housekeeper, and hears her extravagant praise of her master, how he cares for the servants and his sister, that tells her everything. She knows she has misjudged him.

Hubbard said Darcy and Elizabeth complement each other’s flaws. “It takes a self-aware woman to match Darcy,” Hubbard said, pointing out that most female characters of the time were portrayed as helpless victims. “You just don’t like them. Austen’s favorite heroine is Elizabeth.”

Hubbard does not like the last chapter of the book, which begins, “Happy for all her maternal feelings was the day on which Mrs. Bennet got rid of her two most deserving daughters.” Got rid of. The chapter sums up what becomes of some principle characters, a sort of tidying up.

During Austen’s short lifetime — she died at 41 — few people knew of her. Few cared to read books by women. In fact, her name did not appear on any of her novels until “Emma,” in 1816, the year before she died.

Hubbard’s favorite Austen novel is “Persuasion” — “It’s the darkest book … the protagonist is most like Jane Austen.”

“I wish I could teach ‘Pride and Prejudice’ again.”

The next book up for discussion is “First Impressions,” by Charlie Lovett, author of “The Bookman’s Tale.” Lovett will be at Rowan Public Library on Tuesday, July 21, at 7 p.m. to talk about his book, which is fiction about Jane Austen. He was in Salisbury this spring for the Rowan Reading Rendezvous.

The final book of the Summer Reading Challenge is “Dead Wake: The Last Crossing of the Lusitania,” by Erik Larson. Steve Cobb, Hubbard’s husband, will discuss the non-fiction selection on Tuesday, Aug. 18.