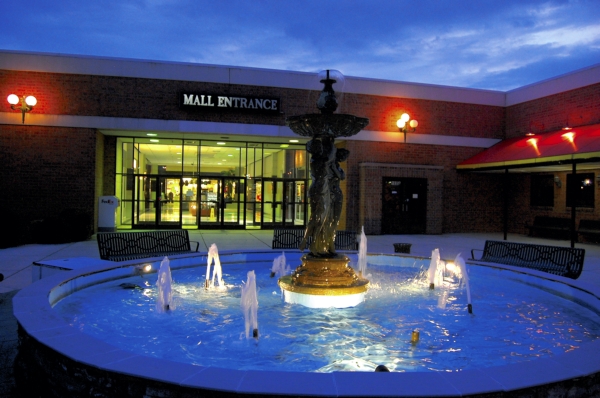 Water splashes in the fountain oustide the entrance to the Salisbury Mall. Inside, most of the storefronts are vacant but some businesses remain. The county, which owns the mall, has plans to move some of its offices to the mall.

Firms from Charlotte to New York City are vying to be the architect for West End Plaza’s multi-million dollar renovation.

Rowan County received qualifications from four firms on Tuesday for West End Plaza’s planned upfitting. Three of the firms are based in North Carolina. The fourth is Vincent Cusumano Architect, based in New York City. Salisbury-based Ramsay-Burgin-Smith, Charlotte-based ADW Architects and Raleigh-based firm Innovative Design are the firms from North Carolina.

Rowan County Purchasing Agent David Sifford said commissioners could, at the earliest, consider picking an architect for West End Plaza at their regularly scheduled meeting on July 6. The architect would oversee all construction at West End Plaza — the former Salisbury Mall. By itself, the entire cost of renovation at West End Plaza is projected to cost $21.26 million, according to the county’s master plan. Finding adequate space for all county departments, including other sites, is projected to cost more than $27 million.

ADW Architects is likely a familiar name to commissioners. The firm completed the county’s space needs study and master plan for facilities, including the West End Plaza. The space needs study and master plan are featured prominently in the company’s qualifications submitted Tuesday. ADW Architects also oversaw the renovation of the Rowan County Health Department on East Innes Street in Salisbury.

With its office a few blocks from the Rowan County administrative building, Ramsay-Burgin-Smith Architects is also a familiar name. The Salisbury-based firm’s portfolio includes a lengthy list of projects in Rowan, including several for government agencies. Ramsay-Burgin-Smith is the architect for the Salisbury-Rowan School System’s central office on North Main Street. The firm also oversaw the Department of Social Services Building and the county’s administrative offices.

Innovative Design is the architect for Catawba College’s Green Step Initiative, which aims to reduce the school’s carbon footprint. The Catawba project is Innovative Designs’ only Rowan project listed in the qualifications submitted Tuesday. The company has a number of projects near Rowan County listed on its website.

The Cusumano firm didn’t include any North Carolina projects in its submission. The closest project to Salisbury completed by the Cusumano firm was in Mount Pleasant, S.C. On its website, the firm lists a number of projects that include office renovations. The firm’s projects are spread across the United States.

When Rowan County Commissioners select an architect, it would be the latest step in an effort to move government offices to the West End Plaza. County commissioners previously had contracts with Lafave’s Construction to renovate spaces for the Board of Elections and Veterans Services. The contracts were abruptly canceled in March. Commissioners cited a lack of communication between various companies working at the former mall as a reason for the cancelation. Canceling the contracts cost Rowan County close to $60,000, according to invoices from Lafave’s.

The cancelation was criticized as delaying the move of county departments that badly need space.

Rowan County on Tuesday also received bids for the construction of office space at the Rowan County Airport. The office space would be located adjacent to the airport’s largest hangar and house aircraft charter company Strategic Moves LLC. The company is currently located in Statesville and would move its headquarters to the airport.

Companies submitting a bid for the office space at the airport included:

On its website, J3H Architects lists a number of projects completed for colleges in the Charlotte region, including: University of North Carolina—Charlotte, Gaston College and Central Piedmont Community College.