Food in the news: Catching up with crawfish 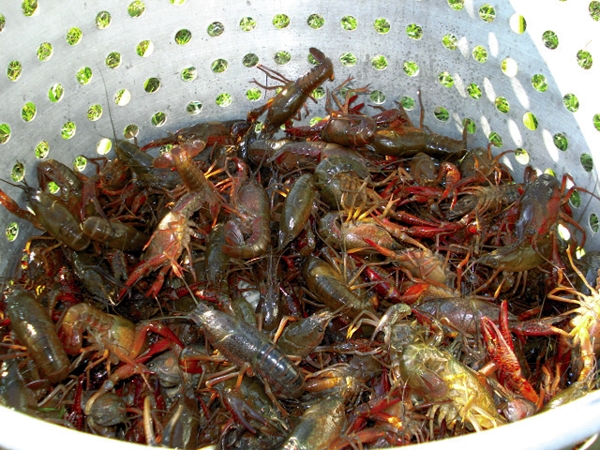 Crawfish.org Live crawfish. if you're hungry enough, will be available this Saturday at the Piedmont Farmers Market in Colefax.

An abundance of fresh, locally raised crawfish will be available during Crawfish Day at the Robert G. Shaw Piedmont Triad Farmers Market Saturday in Colfax.

The annual event, sponsored by the N.C. Crawfish Growers Association, is one of the few times consumers can enjoy fresh N.C. crawfish at the market.

Crawfish will be sold for $6 per pound live or $7 per pound cooked with Cajun seasoning. Vendors will be accepting cash only.

There is a 5-pound minimum purchase for live crawfish and a pound minimum for cooked crawfish. There also is a 25-pound limit per person. No pre-orders will be accepted, so visitors are encouraged to arrive early.

The sale starts at 10 a.m. and lasts until the crawfish are gone. The Piedmont Triad Farmers Market is at 2914 Sandy Ridge Road, Colfax.

While found naturally across North Carolina, crawfish also are raised in earthen ponds found on farms from the Piedmont to the coast. The N.C. season runs from the end of May to mid-July. Last year, state crawfish growers raised about 5,000 pounds of crawfish.

More information on Crawfish Day and other events at the market can be found at www.triadfarmersmarket.com.

What widely considered “healthy” foods do diet experts steer clear of? Time magazine offers a list, which includes: agave nectar (“not at all better than sugar”), fiber-added foods (“can cause gas, bloating, nausea, flatulence, stomach cramps and even diarrhea”), veggie chips (“many varieties are fried”) and smoothies (depending on what’s in there, may have “as many calories as a burger”).

Can’t get no satisfaction

Dieters who have scarfed down a whole box of sugar-free cookies and then found themselves unsatisfied and pawing around the cabinet for something truly sugary will be interested to hear about a recent study that may help explain the phenomenon.

Researchers at the University of Michigan suggest that our brains may distinguish between real sugar and artificial sugar and respond differently.

In fruit flies, which, the researchers note, have similar “molecular machinery” to humans, preferred licking real sugar which prompts a group of neurons to release a hormone received by the gut and brain. Licking an artificial sweetener didn’t stir that response. The scientists believe the insects’ response could be similar to a human dieter. You know who you are.