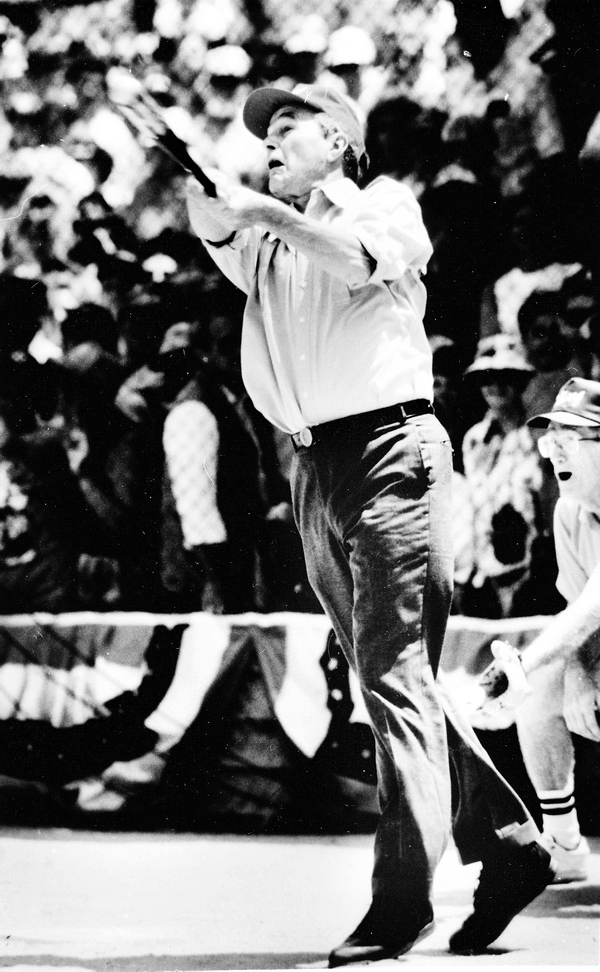 Faith Fourth of July 2015: The day Bush made a hit

By Bill Williams, a native of Faith and former editor of the Gaston Gazette. From his book, “Confessions of a Shoeshine Boy.” President Bush visited Faith in 1992.

FAITH — I had my speech all made out, just in case I got to shake hands wth President Bush.

And then it happened — not once but twice!

The president had bypassed a planned landing in Charlotte and instructed his pilot to fly on to Faith and then circle the perimeter — slowly. That must have been about 1 o’clock.

There were thousands of people already gathered on the school ground when they looked up and there was Air Force One, regal in its blue and white colors and lazing just a few hundred feet high, right over the treetops and right over my old homeplace just beyond left field of the baseball diamond.

The softball game had started and the Faith Reds and Faith Blues were hard at it under a clear sky and burning temperatures. The president was looking down into a sea of faces, waving flags and a patriotic pageant that extended from the quarries on the north end of town to the quarries on the south end. The loud speakers came on with a stirring rendition of “The Battle Hymn of the Republic” and the reaction that ran through the crowd was immediate. Said a hardened old bystander: “I felt a chill run all the way down my spine, and I admit that a few tears watered my eyes.”

It wasn’t long until the president had landed in Charlotte, helicoptered to east Rowan High School and was driven by motorcycle to the Faith School ground.

The softball game was already in progress and I happened to be at bat when the president walked down from right field, along first base and took time to sign autographs for young admirers. The song was loud and clear: “Take me out to the ballgame.”

I was at bat for the Faith Blues and was leaning on a bat at the plate when Gov. Jim Martin came over.

We shook hands and I told the governor that this was the second time that George Bush and I had met on a ball field. He wanted to know when and where. “Bush was playing for Yale and I was playing for Duke in 1948, when we met in Durham.”

The governor turned on his heel and went to the president who, by then, had taken up his position at first base for the Faith Blues. He told the president what I had said, and the President of the United States came down the first base line to shake hands with the guy who played shortstop for Duke that day 44 years ago.

“I said. ‘Mr. President, I just want to remind you that on that day in Durham you went zero for two while I got two for four.’” He looked at the box score that I held in my hand, bopped me on the shoulder and said: “Well we’re going to do better than that today.”

The first ball that came in for me was the kind I like, slow and easy and waiting to be smashed. It went over the second baseman’s head, for a single. He was on first base grinning and offering his hand and saying; “You still have it, don’t you?”

I mumbled something that was incoherent and beat it around to home when the next guy up cracked one deep into right-center field.

The inning then ended and George Bush was the leadoff man. I was catching for our team and had a good opportunity to razz the president. “Come on, Mr. Pitcher, give the Pres the old laser ball.”

In came the first pitch and George Bush leaned into it with a mighty swing. It could have been Casey at the bat. He got good wood (aluminum) on the ball and it flew through the infield for a single. Bush was on base. One pitch, one hit ball. One President of the United States on first base.

I stood there reveling in the moment. You have to know that I had played a thousand ball games on that diamond when I was a boy; and there stood George Bush, the most powerful man in the most powerful country (that ever was) standing on MY old homeplace.

Well the moment ended too soon. We sent the rest of the batting order down in quick succession. Bush had performed. He had batted. He had made a hit, with the crowd, and the crowd showed its appreciation with a roar of approval.

Welcome Back to the Fourth: Residents, both current and former,  share their favorite Faith Fourth memories   Getting smushed on the... read more