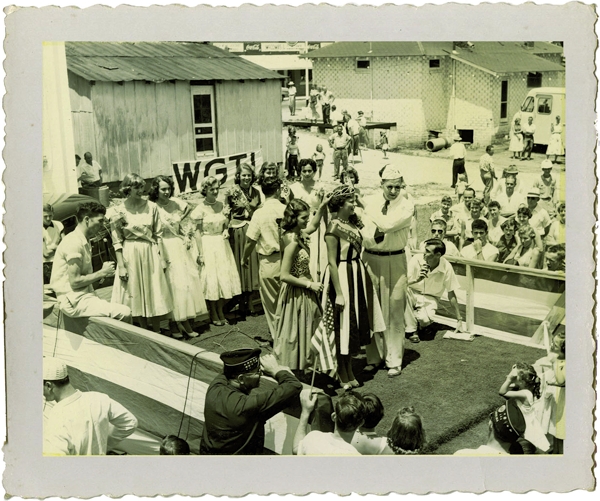 Welcome Back to the Fourth: Residents, both current and former,  share their favorite Faith Fourth memories

Getting smushed on the scrambler by my sister. — Janice Swink

Watching the parade with my family. — Karen Heilig Hurst

Working with my family and getting everything organized for the parade. — Randall Barger

As a young child, my sister and I would go with my Dad in the afternoon to shuck hamburgers so my Dad could start grilling the hamburgers. We would always wear a Cheerwine paper hat and enjoyed talking with everyone. — Jody H. Parnell

Marching in the parade with Myrna’s Crocketts twirling a baton and at the end of the parade my Aunt flagged down a clown in a car and he took me back to the start of the parade and another year I rode in my first grade teachers’s Corvette convertible as Faith’s Miss Poppy. — Lu H. Gamewell

Working in the kitchen, making hamburgers and hotdogs and laughing as everyone gets confused when preparing food orders. — Sally H. Drew

Watching the fireworks from my front porch and the appreciation from everyone for this great celebration! — Daisy Bost

Winning the sack race when I was in the third garde. I won a Kennedy half dollar.

Watching my children (Alicia Gore Holshouser and Randall Gore) ride in the parade with my parents Butch and Mickie Wilhelm in their 1917 Chevrolet. — Malynda Wilhelm Peeler

My favorite memory of the Faith Fourth of July celebration is when I brought each of my kids to the parade for the first time. They were amazed by EVERYTHING! As a parent, it was so much fun to watch the wonder and joy on their little faces. It made me enjoy it more too and not take for granted what a great celebration Faith puts on. — Kristin Byars

My favorite thing about the Faith Fourth was the fireworks, but not the ones set off at the Faith baseball field. My favorites were found under a tent in a firework’s stand at the Faith Legion Park. Those set off at the baseball field were “Class A,” while those purchased from the shaded stand were “class C, or maybe even “D” or “F”, but to me, they “made the grade,” since I could set them off. I guess the placement of the tent above those fireworks was to keep them from getting too hot before their time (some similarity to Paul Masson). There was the “Black Snake,” basically in tablet shape, which when lit, burned and spewed into coiled ash in the shape of a snake (Moses could have had some additional fun with this in Pharaoh’s court). “Snap n’ Pops”, also called “TNT Pop-its” were fun (Gene Kelly even used them in a dance number). When launched, Black Cat bottle rockets didn’t make the professional “ka-thump” sound like the ones at the Faith baseball field, but instead, went “ph-h-h-t-t-t” as they ascended about 50 feet or so, with a few “sparky” stars popping out at the diminutive rocket’s summit. They produced a “pop” rather than a “boom.” There were “Smoke Bombs” which I could set off under my brother Joe’s Buick, or my father’s Studebaker. One favorite was always “The Sparkler.” I still remember its hot chemical burning smell, and feel the tingling hint of pain from its sparks (One time, touching the metal wire before it had cooled, I felt more than just a tingle). Toward the end of a sparkler’s fuel, I would throw it into the air (a kind of poor man’s rocket). A couple of months later, some remains of my Faith Fourth fun could still be seen. In the yard, a few once-sparkling wires were covered with rust; and on our slate walkway, burnt smudges shown “snake-black” against “slate blue.” — Mack Williams

I grew up with many catch phrases being presented to the public on the national scene during the 1950s, such as... read more