Editorial: Only the beginning 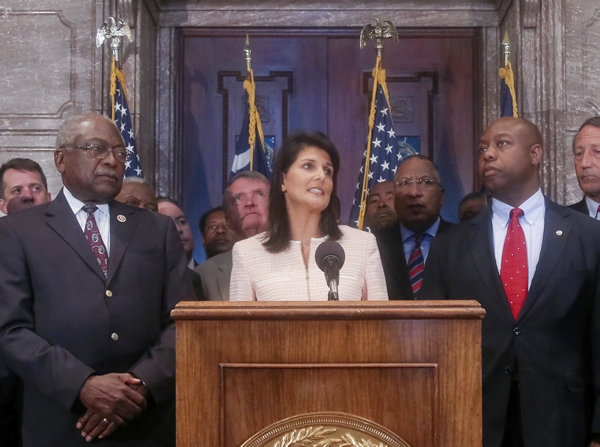 When the Republican governor of South Carolina calls for removing the Confederate flag from the Statehouse grounds, the world should know that last week’s racist massacre at Emanuel AME Church goes beyond tragedy, beyond the news story of the moment. This marks a turning point.

S.C. Gov. Nikki Haley is advocating what she describes as a new consensus, saying that to many the flag is a, quote, “deeply offensive symbol of a brutally oppressive past.”

Haley is showing leadership and courage. Many could argue that she should have taken this action years ago, but give her credit for doing it now. Allowing this symbol to be flown high on government property sends the wrong message to citizens, black and white, and to the world outside South Carolina. But Haley is challenging the South Carolina establishment — the people who elected her — by taking this stand.

The white shooter wanted to start a race war by killing nine black people as they studied the Bible at Emanuel. Instead, he brought people of all races and faiths together in mourning and unity. From the thousands of people who crossed the Arthur Ravenel Bridge in Charleston to the more than 300 who gathered at Salisbury’s Bell Tower on Sunday, people are stepping up to express solidarity.

More prayer services honoring the Charleston nine are planned in Salisbury today — one at 6 p.m. at Gethsemane Missionary Baptist Church on Caldwell Street, the other at 7 p.m. at Cornerstone Church on Webb Road. It’s important to share this moment and acknowledge that racist attitudes have lingered too long. Ignoring them is not enough. They must be challenged.

Now, what other new consensus can the nation reach as a result of the Charleston attack?