About a flag, Obamacare & politics 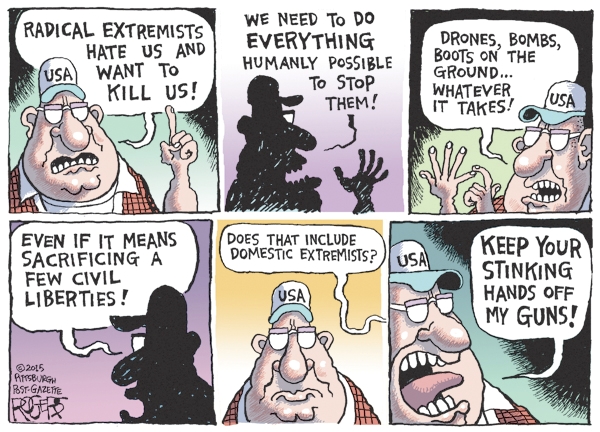 Killings touch off debate across spectrum

Excerpts from columns written in the wake of the Charleston church massacre:

The Confederate battle flag that far too many revere is no better than a swastika. The treasonous Civil War banner is a threatening symbol of Southern resistance, white supremacy and murder that should have no place in American political discourse. In 2013, a protester unfurled it in front of the home of the first black president of the United States in a stunning display of disrespect. Two years later, it figures prominently in the slaughter of nine souls by someone who was welcomed with open arms and no judgment.

For anyone who aspires to lead all Americans, the only acceptable response to the Confederate battle flag question is “take it down!”

Emancipate Obamacare: The  Supreme Court gave individual states the option, if they so chose, of blocking the Affordable Care Act’s expansion of Medicaid, a key part of the plan to provide health insurance to lower-income Americans. But why would any state choose to exercise that option? After all, states were being offered a federally-funded program that would provide major benefits to millions of their citizens, pour billions into their economies, and help support their health-care providers. Who would turn down such an offer?

The answer is, 22 states at this point, although some may eventually change their minds. And what do these states have in common? Mainly, a history of slaveholding: Only one former member of the Confederacy has expanded Medicaid, and while a few Northern states are also part of the movement, more than 80 percent of the population in Medicaid-refusing America lives in states that practiced slavery before the Civil War.

And it’s not just health reform: a history of slavery is a strong predictor of everything from gun control (or rather its absence), to low minimum wages and hostility to unions, to tax policy.

So will it always be thus? Is America doomed to live forever politically in the shadow of slavery?

Politicizing tragedy: With the nation still reeling, President Obama had an opportunity to do something remarkable with his press conference addressing the horror — he could bring the country together, use the faith that unites the people of Charleston and the faithful at Emanuel AME, reminding us of who we are, beyond the ravings and craven act of one individual.

But he didn’t. Instead he chose, again, to politicize a tragic situation by bringing up gun control, complaining about Congress, and then remarkably asserting that, “Once again, innocent people were killed in part because someone who wanted to inflict harm had no trouble getting their hands on a gun. … We as a country will have to reckon with the fact that this type of mass violence does not happen in other advanced countries.” …

The collective reaction on Twitter to his shocking comment was,”What?!” The people of France and Norway know how wrong Mr. Obama is. David Harsanyi at the Federalist reminds us of other horrific mass shootings and violence in “advanced countries” like the Czech Republic, Germany, Serbia, Russia, England, Brazil and China, all within the last few years.

This is not meant to diminish or compare obscenely inexplicable acts of violence, but they do highlight the willingness of our own president to choose the cynical (and oftentimes untrue) path in order to exploit a tragedy for political gain. …

Hatred as opiate: We cannot win against the onslaught of evil if we continue to be divided over things like race, class, gender and nationality. We cannot be so easily manipulated by the devil as to believe that there is a black humanity and a white humanity. If anything, this tragic event should be a warning to us all of the ultimate problem of teaching our children to hate another person based on their race. That goes for black and white parents, educators, law enforcement — all.

Teaching inferiority is just as bad as teaching superiority. Either allows one to view someone else as less than human and undeserving of being treated with human dignity. You cannot win a war against evil with a divisive strategy that destroys us from within. That is precisely what the devil wants.

In the absence of courage, fear and hatred lurk and fester. Hatred is the opiate that emboldens the fearful to commit acts of true horror.

Give up on guns? You could hear the weariness in Obama’s voice as he lamented how, “once again innocent people were killed in part because someone who wanted to inflict harm had no trouble getting their hands on a gun.”

But, alas, unlike those earlier mass killings, he stopped short of calling for action. “At some point,” he suggested, we as a country will have to reckon with our grim reality.

But for now, this president seemed to be throwing in the towel. Sensible and popular reforms such as expanding background checks and crackdowns on unscrupulous gun dealers would not stop every crime but they’re still worth a try. I wonder how many more needless deaths it will take before the rest of us say, “Enough!”