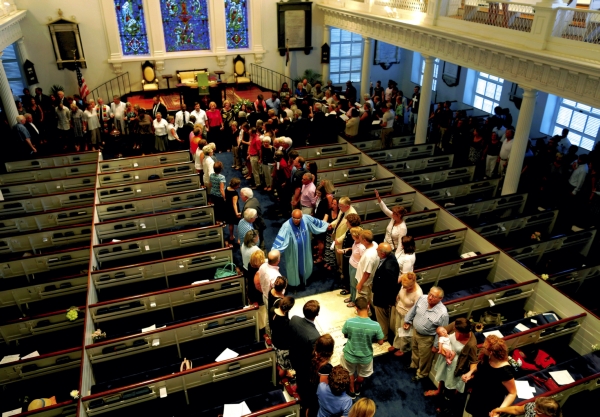 Days after a gunman walked into historic Emanuel African Methodist Episcopal Church in downtown Charleston and allegedly shot and killed nine people, members the church community there declare they will not be shaken.

Charleston authorities charged Dylann Roof, 21, with nine counts of murder, calling the incident a hate crime. Officials said Roof walked into the church, sat down for about an hour during Bible study and then opened fire. Five people survived.

“It was an act of healing where we could come together and try to come to grips with this terrible thing that happened,” Davis said.

Davis and his family have lived in Charleston for about 23 years, but he grew up in Salisbury and attended Trinity Presbyterian Church. His mother, Annie, was a teacher and his father, Ernest Davis, was a police officer. Sidney Davis is pastor of Zion Olivet Presbyterian Church, also located in downtown Charleston. Many of his congregants were related to the shooting victims and Davis knew victim Pastor Clementa Pinckney as a fellow member of the Charleston religious community.

The response from the community in Charleston and abroad, Davis said, has been one of concern. He said he’s heard from people in Hawaii, Texas and Alabama.

Davis said the Charleston community as a whole is hurt, but not angry. He added that the act of violence wasn’t just committed on black people, but the whole community.

“We are not mad, but resolved that God is going to win in this matter. We have a faith that cannot be torn apart by an act of senseless violence,” Davis said.

He said the people there are of the mindset that this act of violence isn’t going to make the churches change what they’ve always done — welcome people into their respective houses of worship. Davis said he doesn’t plan to lock the doors of his church or hire a security guard, and he doesn’t believe other churches will change the way they’ve always held Bible study and other services.

“If that means we have to risk … we’ll do that. We aren’t going to hide and respond with anger,” he said.

Davis said by the same token, the community would be naive to think things are going to be the same, but “it won’t change the fact that we have to have our doors open to everybody, even the people who hate us.”

By Susan Shinn For the Salisbury Post “For I am convinced that neither death, nor life, nor angels, nor rulers,... read more