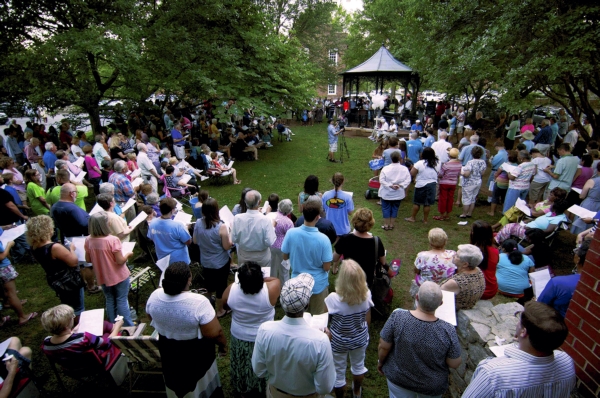 “For I am convinced that neither death, nor life, nor angels, nor rulers, nor things present, nor things to come, nor powers, nor height, nor depth, nor anything else in all creation, will be able to separate us from the love of God in Christ Jesus our Lord.”

The evening was warm and muggy, but that didn’t stop folks from gathering just after 7:30 Sunday evening. They shared friendly conversations, smiles and hugs.

Brenda Munday summed it up well.

“The man who is responsible for this senseless act of violence wanted to start a race war,” she said, “and what he has done is just the opposite. God’s hand is in this. It’s gonna have a positive effect. I know it is.”

By 8 p.m., more than 300 people had gathered around the Bell Tower at Jackson and Innes streets for a service of scripture and prayer. A small, wooden cross sat at the base of the gazebo. Nine white balloons were tethered to the cross, one for each of the victims killed Wednesday night at Emanuel AME Church in Charleston, S.C.

The 30-minute service was meant to honor and remember those victims, as well as serve as a renewed effort to improve race relations in Salisbury, organizers said.

“I just felt the need to be here because I am so against racism,” said Diann Neely of Salisbury. “I want peace in this world. I’m a true believer that God put us here together. My mom always said that love is not a color. I’m hoping and praying God will put his arms around Charleston.”

Nearby, Anna Woolly, Julie Kenny and Kerry Campion passed out small bottles of water to the grateful crowd. Anna lives just a few blocks away from the park.

At 8 p.m., the Rev. Timothy Bates stepped up to a podium set up under the gazebo, looked out at the hundreds of people, and smiled.

“God is good, all the time,” he said, as the congregation repeated his words. “This is so beautiful. On Friday morning, I heard these words, ‘Timothy, we have to do something.’ Those were the words of the Rev. Jim Dunkin. This is the something that God has put together.

“We thank God. The intent (of the crime) was to divide. But we have come together in the name of Jesus.”

A chorus of “Amen” punctuated his words. “The intent of this meeting is to do something, so let’s begin to do that something.”

Dunkin, who is white, is senior pastor of First Presbyterian Church, and Bates, who is black, pastors two churches in Statesville.

Dunkin was clearly delighted at the turnout. He apologized that he didn’t have enough candles for everyone; he’d only brought 175.

“We never dreamed we’d have so many here tonight,” he said.

Those who had candles lit them, as everyone sang, “Blest Be the Tie That Binds,” accompanied by First Presbyterian’s John Stafford Smith on keyboard.

Then, one by one, nine pastors came forward to release each balloon, as the gathering called each of those martyred by name. Every balloon cleared the dense canopy of trees, then drifted upward, past the tower, into the blue sky.

Dunkin and Bates embraced for a long moment, then began to greet those around them.

“I so needed this,” Lugene Cox said as the crowd dispersed. “This has been so hurtful, and I just needed to meet with a fellowship of kindred minds. I’m very thankful.”

Three Salisbury police officers had stood on the perimeter of the park, providing a reassuring but largely unnoticed presence.

“This was perfect, just perfect,” Officer P.J. Smith said. “It was a great service.”

But it was just the first step, Woolly said in his sermon Sunday morning, in how to respond to the tragedy.

“First we begin in prayer,” he said, “but then, with a call to action.”

The pastors who gathered last evening echoed that call to action.

“We’re gonna sit down and talk about this,” Bates said. “We’ve got to move into action. Folks want peace. Folks want their children to live with each other.”

“He married a Caucasian lady, and I officiated,” he said.

At one point during the reception, he said, his nephew began to dance with a little white girl, and they had a ball. “It was the most beautiful thing.”