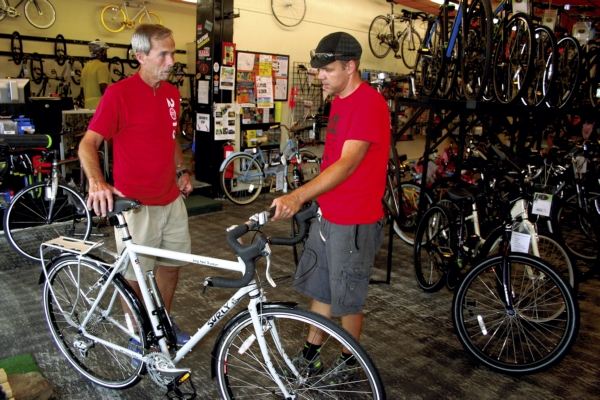 David Freeze discusses what equipment he will add to his bike with Eric Phillips, owner of Skinny Wheels Bike Shop. Susan Shinn / for the Salisbury Post

David Freeze rides again — this time from Alabama to Ontario David Freeze leaves next weekend for his third summer cycling adventure. He’ll follow the trail of the Underground Railroad from Alabama to Canada, traveling through nine states in the process. Susan Shinn / for the Salisbury Post

David Freeze thinks the third time is the charm.

For the third consecutive summer, he’s about to embark on a long-distance cycling trip. Beginning next weekend, he’ll trace the route of the Underground Railroad, from Mobile, Ala., up to Ontario, Canada.

He also wants to travel past Lake Erie, Lake Ontario and Niagara Falls.

“I’ve never seen Niagara Falls,” Freeze says, “so if I’ve still got the bike in one piece, it’ll all be good.”

Unfortunately, he’s not joking. Last summer, his beloved Surly bike was totaled in an accident in Tequesta, Fla. The accident happened in a resort town when the driver of an SUV struck his bike, and Freeze narrowly missed catastrophic injury.

But now, he’s about to go back on the road with a new Surly, and a new route — one that’s much more rural this time.

His daughter Amber will take him and his bike down to Mobile next Sunday. Freeze appreciates the effort.

“It’s a real complicated deal to take the bike apart, ship it, and put it back together,” Freeze notes.

And heaven forbid he’d have to start his journey behind schedule — which happened the past two years when he had his bike shipped.

“It was a hassle,” Freeze says, in his typical understated fashion.

Freeze will take to the road with a brand-new 2015 Surly bike. Believe it or not, it’s the first time he’s ridden since last summer.

However, Freeze, a local motivational speaker and running coach, has been running every day, by himself and with clients, about 10 miles a day.

He’s only been off blood thinner since April, and doctors warned him against riding while on that medication. He listened, for once.

“I’m confident enough to know that running gets me into shape,” he says. “I’m not worried about it.”

Freeze chose this particular route because he’s a Civil War enthusiast. As always, he’s kept a close eye on the weather. At present, the weather is 15 degrees cooler in Alabama and Mississippi than it’s been at home.

“But I had 100-degree days in Kansas and Florida,” he says. “I can do it. Those days, I just get up early, and call it off during the hottest part of the day. I want to see more states I’ve never been in or never cycled in.”

Heading north, Freeze will only cross one state he traveled through during his cross-country trip in 2013, the state of Kentucky. When he cycled from Maine to Key West last summer, he only overlapped one town: Cheraw, S.C.

“It’s amazing to see all the backgrounds of the states, and the people along those back roads. Those are the two things I enjoy most,” he says.

As has been the case with his two previous trips, Freeze will file daily blogs from the road. You’ll be able to follow his progress throughout the 35-day trip in the Post.

He’s planning to book a flight home from Toronto, and will set his schedule to arrive in that city one or two days before that.

Freeze says that besides Toronto, there are really no big cities along the way. “I got into so much heavy traffic before. I realized this would be more fun without the big cities and heavy traffic.”

On his first trip, he says, “There were lots of long stretches where I would just ride and see the country and meet the people.”

He hopes to do the same thing on this trip.

Freeze has long been plagued with kidney stones, and has passed a few small ones recently. However, he’s taking some medication along for that condition, just in case.

Freeze is looking forward to traveling into cooler weather — the high these days in Toronto is 71. He’s going to purchase a lightweight sleeping bag, and he has a newer, better taillight that he’ll run constantly. He’s also purchased a better tire pump.

The rest of his packing list, as usual, remains light: 2 T-shirts, one long-sleeved T-shirt, one wool shirt, a Tyvek rain jacket, one pair of cycling shorts, one pair of casual shorts, a couple pairs of underwear and socks, and a pair of shoes.

“Everything is about space and weight,” he notes, adding that he’ll wear leather cycling gloves and keep a pair of cotton gloves on hand in case he has to change a flat tire. It’s a dirty, greasy mess, and those gloves are easily disposed of afterward.

There are no churches available to stay in along this route, Freeze says, so he’ll use a combination of camping and motels, calling from the road to get reservations.

Freeze’s mileage for this trip will be somewhere between 2,300 and 2,500 miles, about the same as last summer’s adventure.

“Going into this one, I’m less anxious about what it’ll be like,” Freeze says. “I’ll have my tools. I can keep the bike going. This time, I’m more ready to do it. It should be more about riding than worrying about traffic.”

His running clients will be working out on their own, as will Brent Parks and Norma Honeycutt, with whom Freeze has been working since January. He’s been documenting their progress in occasional Post stories.

“They’re getting better about generating their own workouts,” he says. “This is the perfect next step.”

This past week, Freeze started his own training regimen for the trip: eating ice cream. He needs lots of extra calories for the ride, and he’s discovered that he can always find ice cream and Reese’s Cups wherever he goes.

By Josh Bergeron josh.bergeron@salisburypost.com Five causes of death are increasing and four are decreasing in the latest State of the County... read more