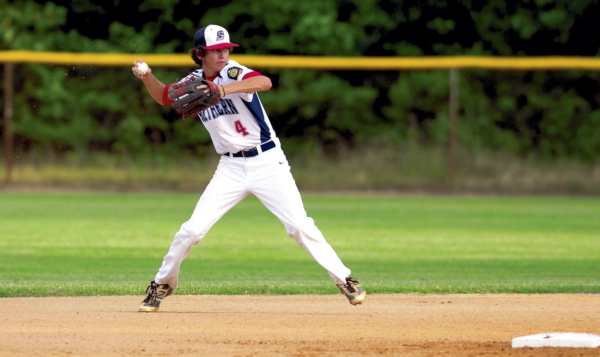 LANDIS — It came down to the last pitch.
If Southern Rowan reliever Brandon Newton had thrown a fastball, Davidson County’s Joe Butts might have drilled it into the right-center gap for a game-tying double.
Instead, Newton snaked in a sweet curveball for strike three, and Southern Rowan held on for a 9-7 American Legion baseball victory here Monday night.
“Oh yeah, I was getting a little nervous,” Newton said. “But we got that last guy with back-to-back curveballs.”
The visiting Warriors (8-9, 4-4) were hard to get out, spanking 15 hits against Southern Rowan starter and winner Blake Johnson (4-1), and relievers Dylan Snider, who worked the seventh and eighth innings, and Newton, who battled for the final three outs.
Davidson County, a 6-5 loser at red-hot Rowan County on Saturday, also made a half-dozen outs on balls that were ripped toward right fielder Aldyn Blackwelder, center fielder Eric Stowe and left fielder Shaggy Wyatt. Post 8 wasn’t lucky, couldn’t put a big inning together and left 12 men on base.
“We are a little snake-bit right now,” Davidson County coach Dale Moser said.
Christian Dix led the Warriors with three hits. Butts, Zack Shoemaker, Zach Queen and Holden Lanier had two hits each.
Missing Bo Corriher and Ryan Bearden, Southern Rowan (10-8, 5-4) countered with a dozen hits. Jake Pritchard had three hits and three RBIs. Matt Honeycutt, Dillon Atwell and Stowe had two hits each. Chase Labbe drove in three runs.
The first three hitters to face Johnson drilled singles, and Davidson County had a 2-0 lead after a half-inning. Southern Rowan got those runs back immediately on a run-scoring single by Pritchard and Labbe’s sacrifice fly.
Butts crushed a ball in the second inning, but Stowe ran it down at the fence and turned it into a sacrifice fly instead of an extra-base hit, but it still gave Davidson a 3-2 lead.
Southern Rowan’s five-run second inning against DC starter Chandler Simerson proved decisive.
“They got four of those five after we made an error,” Moser said with a sigh, and he was correct.
Chandler Corriher’s RBI single made it 3-3. After an intentional walk to cleanup hitter Pritchard, Labbe stroked a two-run single to center. Then Atwell and Stowe added RBI singles for a 7-3 lead.
“We kind of made a statement offensively for the first time in a long time and that was the key to this game,” Southern coach Ben Hampton said. “They scored runs in the first, and we answered. They scored again in the second, and we answered with five runs. Scoring runs early helped Blake Johnson settle in.”
The first two innings took an hour to play, but then Johnson put zeroes on the scoreboard in the third, fourth, fifth and sixth innings.
“We backed him up with offense and defense and then Blake started hitting his spots,” said Pritchard, Southern Rowan’s catcher.
Pritchard provided some of that backing with a two-run homer in the sixth frame for a 9-3 lead. It was a no-doubter. It was his second homer of the summer and first at home.
“I saw that pitch really well,” Pritchard said. “I think that’s the first time I’ve ever hit a homer where I knew it was gone as soon as I hit it.”
Other than Pritchard’s blast, reliever Nick Borgan, who entered in the second inning, did a nice job for Davidson County. He gave his team every chance to come back. It almost did.
Davidson’s Warriors, wearing burnt orange uniforms, picked up single runs in the seventh and eighth innings against Snider to inch within 9-5, and then made a charge at Newton in the ninth. A wild pitch made it 9-6. Landon Michael’s two-out RBI single made it 9-7, put the tying runs on base and put Butts, the leadoff hitter, in the batter’s box.
Butts had two singles, two walks and a sacrifice fly when he stepped to the plate in the ninth, so there was every reason for Southern Rowan fans to be nervous. But Newton got the job done.
“That’s a good team we faced tonight,” Pritchard said. “But we showed up and played.”
Southern Rowan will pitch Matt Brown against Greensboro Wednesday at home, will go with Burke Fulcher Friday at home against Stanly County and will send unbeaten Atwell (4-0)to the bump against Rowan County at Newman Park on Saturday.
The playoffs are approaching fast.
“And the playoffs will be interesting,” Moser said. “There’s a whole lot of teams that are very even.”