The case of the missing fathers 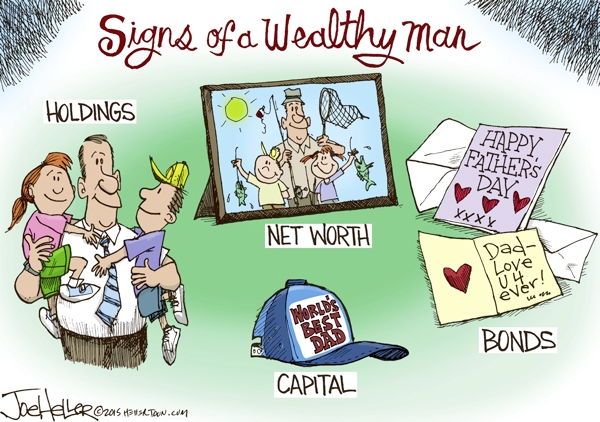 Coming soon to a breakfast table near you: milk cartons with pictures of missing fathers. America is suffering from an epidemic of homes without fathers. Twenty-four million children live in a biological father-absent home.

In the animal kingdom, few males stick around after mating—some for good reason. Adult love bugs live only about three days.Hey, mate with as many females as you can and die happy. Female black widow spiders often eat their male partners after mating — so does the female praying mantis.

Among mammals, parenting, almost exclusively, is performed by the mother. And, in some cases, cats and bears, for example, the male represents a very real danger to the young ones.

Birds are the exception in the animal kingdom. In most cases, the male not only helps to build the nest and feed the female while she sits on the eggs, but he shares in the task of feeding the young chicks before they leave the nest.

Besides birds, man is quite distinct in his role in parenting. The design, ever since the Garden of Eden, has been for men and women to pair off and have children together, with the man not only sticking around, but taking major responsibility for raising the children and otherwise supporting the family.

After thousands of years of working reasonably well, this model seems to have been in the process of being replaced in America over the last half-century with disastrous results.

In 1960, just 8 percent of American children lived in homes without a father. Now, 41 percent of births are to unmarried women.

Some have associated this demographic change to the general prosperity resulting from industrialization, but, in countries like Italy, Poland, Germany, Austria — even France, children living with two parents in the home exceed 85 percent.

There is a growing consensus that this deleterious phenomenon is an unintended consequence of well-intentioned government policies. The federal government runs more than 80 welfare programs. Almost all of them provide financial incentives for couples to remain separate and unmarried.  Our welfare programs contain a marriage penalty.

There are very tangible social pathologies resulting from the unintended consequence of our welfare programs. Children born in households without a father are two to three times more likely:

• To be convicted of a felony

• To suffer from severe emotional illness

• To have children out of wedlock

• To fail to graduate from high school

• To not ever hold down a long-term job

• To live in poverty

• To die a violent death

Children in father-absent homes make up:

• Eighty-five per cent of youths in prison

Of course, there are some fathers who fall short of the mark. Perhaps, a case could be made that the family would be better off without some of them. But, as Woody Allen (who has never been in the running for a “Father of the Year” Award), is credited with saying, “Showing up is 80 percent of life.”

Fathers perform a very necessary function in the household.  This is proven by the troublesome consequences when they are absent. In addition to providing physical support to the family, their role is that of a guardrail. As children mature and start assuming their place in life, they are encouraged to move along, but limits are set so they don’t run off the road. This works both to their advantage and to the benefit of society.

A father’s job is epitomized by the man who takes his child to the park and encourages him to play on the monkey bars. The child climbs and swings from the bars, but the father stands there with his outstretched hands only inches away, fully prepared to catch the child if he has a miscue.

Today our nation celebrates Fathers’ Day. It’s a chance for children of all ages to say to their fathers, “Thanks for showing up.”

The first observance of a Fathers’ Day was on July 5, 1908, in Fairmont, W. Va., in the church now known as Central United Methodist Church.

The previous December, in nearby Monongah, a mine explosion killed 361 men. A thousand children were left fatherless. The church in Fairmont held the service, but the idea failed to catch on.

Others took up the cause through the years, but it wasn’t until 1972 that President Richard Nixon made it a permanent national holiday.

It’s ironic that this came on the heels of many of the major government policies that have encouraged father-absent homes.  Social engineers seem to forget the truism that if you tax something, you get less of it; if you subsidize something, you get more of it.