The best advice I got from dad … 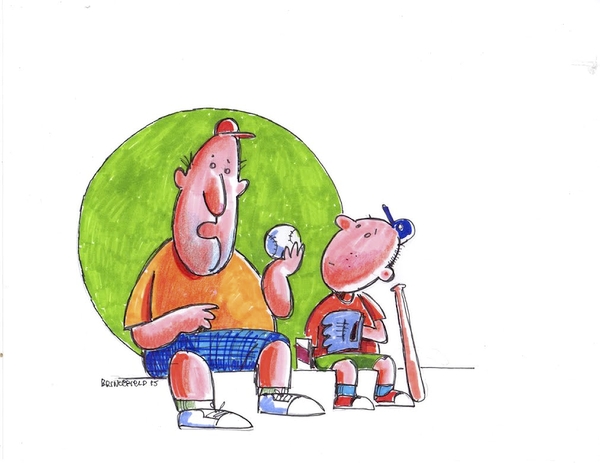 Daddy always used to say, “Prepare for your future. Spend your money wisely, save a few bucks every paycheck and buy yourself some life insurance.”  My daddy was a smart man.

The best advice my dad has ever give me is don’t get too big for your britches.

My father, Lt. Col. Sidney Kersey, spent 30 years in the military. We moved many times as I was growing up. At each new post I would whine and complain “I don’t like it here, I miss my friends, there’s nothing to do here.” His advice was always the same: “Bloom where you’re planted son.”

We lost my Dad (Joe Myers) almost two years ago after an intense six-week battle with Acute Myeloid Leukemia. He was quite a character, never met a stranger and would help a person if he could. His best advice to us over the years has been simple: “Leave the woodpile higher than you found it” and “Watch and Learn.”

The first one simply meant you should leave something in better shape than you found it. A simple gesture means a lot. For example, if you borrowed your neighbor’s lawnmower, return it with a full tank of gas, or even if your family wasn’t the one that left a mess at the picnic table at the park, clean it up.  Leave it better than you found it.

As for “Watch and Learn,” that covers all kinds of things … it could be as simple as truly watching how someone does something and learning how to do it for yourself, or it could also be a matter of learning from other people’s mistakes.  Watch them mess up their life or situation by making poor decisions and learn not to make the same mistakes in your own life.

My dad, Robert Lee Mills Sr., often told me, “You are not any better than anyone else, and there is no one better than you.” He also told me, “If you want something bad enough and you work hard enough and long enough, you can achieve it.”

He also used to tell his children that “There is nothing going to happen that the Lord and I cannot handle.” Daddy has been gone four years and I miss him everyday.

My father Steve Shirley’s best advice: Love your God, love your family and love your dog, but most importantly, love the Clemson Tigers!

My grandfather Charlie Reed’s Best advice: My Pop told me more than once, “You better be sweet to that pretty girl,” and it’s a good thing I listened all those years, because now that pretty girl is my wife.

Best advice my dad, James Canupp, gave me is to work hard and never give up.

I remember once when we were discussing boundaries, my dad said, “Always remember that your right to swing your arms stops where someone else’s nose begins.” I thought that was pretty good advice to carry through life.

Lots of sound and sage advice from my dad (Russell Greer), but two I think about often:

1. Trust in the LORD with all your heart and lean not on your own understanding. Proverbs 3:5 — there is no circumstance in life where this doesn’t apply or prove useful.

2. A bargain is only a bargain if you need it. Specifically his words are, “Don’t tie all your money up in ________” Fill in the blank — wrapping paper, toothpaste, shoes, cereal … even if it is on sale!

My Dad ( deceased) was Carroll Joseph Clapp (known as Joe).

The advice he gave  me was to get an education no matter how long it took because it was the one thing that cannot be taken away from a person along the bumpy road of life.  I  listened to him and I earned  bachelor of arts degree at age 43!

My Dad, who died at age 65, led an interesting life and did well for someone who graduated high school in 1931 in the darkest year of the Great Depression. He served his country in WWII in the U.S. Army Air Corps and was a wonderful husband and father.

My daddy Garner Kepley was a remarkable man, a great Christian who walked the talk. He inspired five generations and taught me how to live and how to die. In my childhood, I would often find him praying on his knees for his family. He left us for his heavenly home at 95 years old. I love and miss him!

My father, Nathaniel Currie, has been legally blind since I was born. It is not what he said, but what he did, such as: lay bricks, Boy Scout leader, cook, and fix cars. By his actions, I knew he did these things to show me that handicaps are no excuses for overcoming life’s challenges.

My father, Dr. Stan Welch, taught me many, many things, and as I get older, I find that his words have become prophetic in a sense. His wisdom far exceeded his age when we were growing up, and I always felt like my dad was so much younger than the fathers of my peers.  Of the countless lessons I learned, one thing he always said was, “Can’t Never Could!”  When he would tell me to run harder around the bases, struggle to pull tarps full of leaves to the woods, or load firewood that had just been split, he always beckoned for me to push myself.  When in my youth, I would often reply, “Daddy, I can’t!”  He would say, “Can’t Never Could!”  Try harder and do better were the underlying themes. I often find myself saying this same phrase to my own children when they say, “Daddy, I can’t do it!”

A tremendous work ethic is engrained into my father’s being and he passed it along to us.  He isn’t as young as he once was, but still maintains that ethic to this day. Another phrase he would often mention was, “Make Hay While the Sun Shines,” meaning that we had to work on things while it was still daylight outside. Certain things that needed to be done inside could wait due to the ability to see using electric light. To this day, I maintain this. I strive to finish outside projects and work outside while there is natural light to work by.  So thankful for a Godly heritage and the blessing of a father who loves me unconditionally, who strived to raise me with more than he had growing up, and who continues to pass along knowledge to my family.

As we reflected on the advice our dad, Dale Beaver, has given us over the years, we came to the realization that his best advice can be summed up as follows:

“It is better to learn from instruction, rather than from experience.”

He will readily admit that advice isn’t his own, and we will admit we wish we would have heeded it much earlier in our lives.  Our dad epitomizes what we think most parents are like — they want better for their children than they had for themselves. We’ve learned (often times the hard way) that listening to the experiences and wisdom of our dad truly is better than ignoring that advice and then making terrible mistakes — mistakes that usually impact the ones we love most as much as they impact us.

As parents ourselves now, we see the value of his advice, and we pray for two things:

1.  that he will be as forgiving as always for the times we have ignored him; and

2. that our own children will be wiser than we have been — heeding the instruction from our mistakes, so their lives can be spared some of the pain of experience.