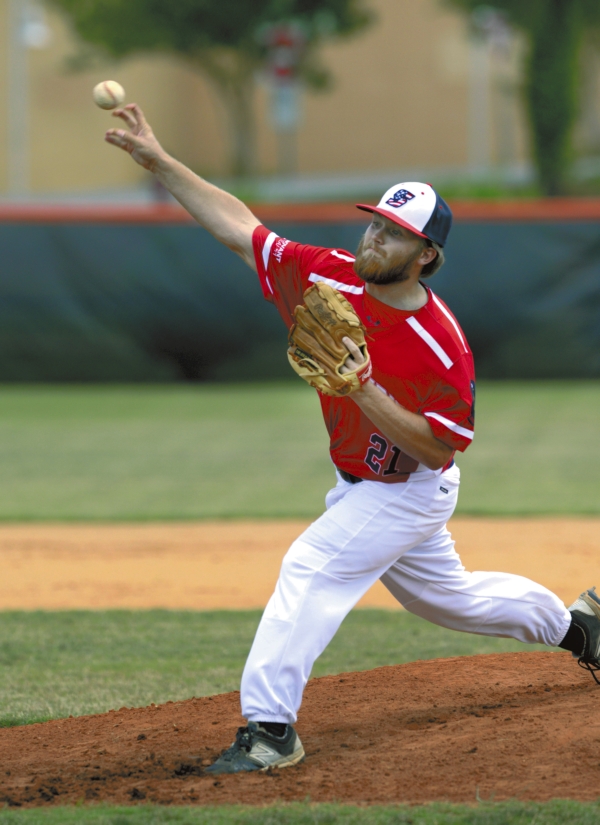 Wayne Hinshaw file photo/for the Salisbury Post Burke Fulcher, shown in an earlier game this season, started on the mound for Southern Rowan last night, pitching into the eighth inning of the game against Eastern Randolph.

LANDIS — Eastern Randolph rallied late to edge host Southern Rowan, 4-2, here Sunday night, but it was hard to tell who won and who lost based on post-game comments by the two coaches.

“We just weren’t very solid or fundamentally sound with our base running,” said winning coach Jerry Kidd of Post 81. “It was just decision making. It didn’t cost us a win but it definitely cost us some good chances to score runs.”

Kidd was primarily referring to the fact that Post 81 not only hit into two double plays, but were caught stealing twice in the final two innings — and had a runner picked off second after a lead-off double in the eighth inning.

For Southern Rowan, Coach Ben Hampton lamented the string of missed opportunities and poor approaches at the plate, especially late in the game.

“We had base running mistakes at crucial times, a missed sign at a crucial time,” Hampton said. “Then late in the game, down a run, you can’t put the ball in the air. You have to get on top of the baseball and square it up.”

Of 27 outs, Southern made 13 by popping up to the infield or hitting fly balls to the outfield, including eight times in the final four innings.

Post 81 left-handed starter Chase Fuquay had a lot to do with the hitting woes of Southern Rowan as he used pinpoint control and off-speed pitches to keep Post 115 back on their heels. Fuquay went seven solid innings to earn the win, his longest outing of the season, then Brayden King went the final two frames for the save.

Southern Rowan starter Burke Fulcher gave up two runs in the first then settled in and held Post 81 at bay until his team caught up at 2-2 in the sixth inning on Jake Pritchard’s one-out RBI-single. But Fulcher began to tire in the seventh inning as Gage White doubled and King drove him home with a seeing-eye single to put Post 81 back on top, 3-2.

“I did get a little tired. It was a long game,” said Fulcher, who departed in the eighth inning with two on and no one out. “I just tried to hit my spots and let my defense work but it just didn’t work out in the end.”

Matt Brown came on to halt the threat by Eastern Randolph in the eighth with a pick off of D.J. Laxton at second base and two fly ball outs.  But the visitors added a crucial insurance run in the top of the ninth inning on King’s RBI-double, his second hit and second run driven in of the game.

Southern went quietly in the ninth to fall to 9-8 overall, 4-4 in the Area III standings. Post 81 kept themselves in the chase for a first-round playoff bye, improving to 10-5 overall, 5-3 in Area III.

Laxton and Easton Jones led the winners with three hits each as part of a 13-hit attack. Southern was led by Pritchard, Matt Honeycutt and Chase Labbe with two hits each. Tristan “Shaggy” White, normally a catcher, made a rare start in right field and responded with a double and a sacrifice fly to drive in Southern’s first run in the second inning.