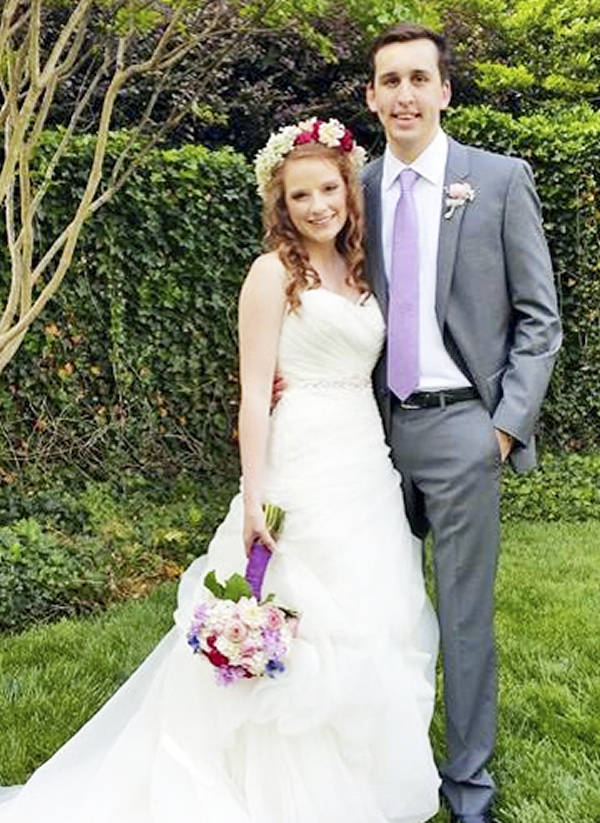 MOORESVILLE — Faith Caroline Sedberry and Reece Michael Szymanowski were united in marriage May 9, 2015, at Johnson’s Carriage House and Meadows. The Rev. Ryan Cannon officiated the 6 p.m. ceremony, which was followed by a reception.
The bride was escorted by her father and attended by Kasha Patel of Washington, D.C., as maid of honor. Stephanie Marcum of Richmond, Va., was bridesmaid.
Rory Mebane Szymanowski of Bel Air, Md., was his brother’s best man, and Stephen Farrell of Denver, Colo., was groomsman.
The bride is the daughter of Mr. and Mrs. William Martin Sedberry of Mooresville and the granddaughter of the late Mr. and Mrs. William J. Wyatt of Salisbury and the late Mr. Ray A. Sedberry and Mrs. Doris Sedberry Masters of Woodleaf. A 2008 graduate of Lake Norman High School, Faith graduated magna cum laude from Wake Forest University in 2012, where she majored in Mathematical Business and minored in Studio Art. She was also inducted into Phi Beta Kappa and Beta Sigma Gamma. Faith is employed by TIAA-CREF in Charlotte.
The groom is the son of Mrs. Kim Szymanowski of Bel Air, Md., and the grandson of Ms. Elizabeth Pryor and Mr. Robert Pryor of Bel Air and Mrs. Helen Szymanowski and the late Mr. Frank Szymanowski of Baltimore, Md. A 2008 graduate of Loyola Blakefield High School, he graduated cum laude from Wake Forest in 2012, where he majored in Finance and minored in German. He is employed by Regions Bank of Charlotte.
The couple honeymooned with a 2-week trip including a layover in London, England, on the way to the island of Mauritius. They are living in Charlotte.