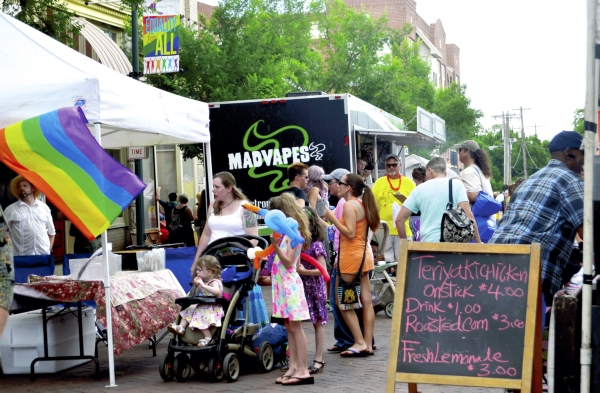 People line West Fisher Street Saturday for the 5th annual Salisbury Pride event where more than 4,000 attended for hours of entertainment, food and fun, according to organizers. Shavonne Walker/Salisbury Post

Salisbury Pride brings in a crowd despite the heat, rain

“You can dance, you can jive, having the time of your life” isn’t just the lyrics to Swedish pop group ABBA’s popular song “Dancing Queen” — it was pretty much the vibe of this year’s Salisbury Pride event.

The peppy dance song wafted through the streets as people milled around East Fisher and South Lee streets checking out booths, food vendors and the music.

C.J. Mowery wasn’t hard to spot at the event with his rainbow-colored face paint, purple and yellow feathers atop his head and brightly hued inflatable fairy wings. He was dressed up as “Tinker Male,” a costume that took him about three weeks to create and three hours to get ready.

Mowery, who lives in Spencer, has attended the Salisbury Pride festival every year but has only donned a costume since last year.

He attends every year because of the welcoming community, he said.

“I look forward to having everyone together,” Mowery said.

He said the event is for everyone, not just the lesbian, gay, bisexual, transgender community. He thinks everyone should attend at least once.

This event is about “being proud of who you are in general and not just your sexual orientation,” Mowery said.

Kala Bates attended with her fiancee, Chris Maness, for the first time. Maness said she’s attended for the last three years and really wanted Bates to experience the event for herself.

“It’s my favorite day,” declared Maness. “It’s about being with people who just want to be happy.”

As for the protestors who carried signs, Bibles, crosses and video cameras, Maness said it’s their right to exercise freedom of speech.

“They’ve got their beliefs, and we don’t judge them. We are all equal,” she said.

As her first time at the event, Bates said, “it’s awesome.”

Lita Alexander Storm, who performed in drag during the event, donned a colorful costume as he hit the streets after the show. Storm is an entertainer at Scorpio Charlotte and attended with others from the night club.

Storm of Salisbury attends and performs every year.

Of Storm’s performance, he said it’s not necessarily singing, but he does ‘lip sync for my life.”

Derrick Teder said the event simply makes him feel at home. Teder is a a native of Orlando, Fla., but has called Salisbury home for the last three years.

“You get to meet a lot people you wouldn’t know on an ordinary day,” he said.

Teder said the event was awesome and has attended for the last three years.

Salisbury Pride President Tamara Sheffield said there was a steady crowd at the event despite the heat and the rain. She said estimates show the event broke last year’s record of 4,000 people.

“We’re really lucky to have an event for all citizens. It’s for families, straight people, gay, however you identify,” she said.

She said people who attend aren’t just from this county but also from Georgia, South Carolina and California.

“There’s something really special about this event. It’s all about equality for all,” she said.

She said the perception is that since Mayor Paul Woodson did not sign a proclamation for the event, the city doesn’t support it.

Sheffield said that isn’t true and she believes the city of Salisbury stands behind the event and has received tremendous support from area businesses, the Salisbury Police, who provided security and the Salisbury Fire Department, which was also on hand.

She thanked Congresswoman Alma Adams for her support and Mayor Pro Tem Maggie Blackwell, who delivered the welcome for the event.

Sheffield said this is the first year they held events all week long and the first year for ally and volunteer awards. Some of the week’s events included a 5K fun run, a drag show and a downtown bike ride.

By Jeanie Groh jeanie.groh@salisburypost.com  The Autism Society of North Carolina will be providing a free workshop to families of children... read more