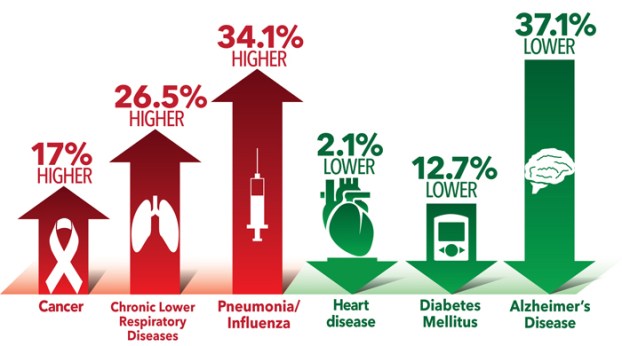 Five causes of death are increasing and four are decreasing in the latest State of the County Health Report.

The report, released last week, shows rates of five of 10 leading causes of death — cancer, chronic lower respiratory disease, pneumonia and flu, kidney diseases and whole-body infections — increasing from 2009 to 2013. Heart disease, stroke, Alzheimer’s disease and diabetes are listed as decreasing in the report. Other unintentional injuries, such as car accidents, are listed as the sixth leading cause of death, but it doesn’t include historical data.

Rowan County also has greater death rates than the state average among all of the top 10 leading causes, according to the report.

Many of the causes of death cited in the report are preventable or are at least less frequent among people with healthy lifestyle habits, according to Health Department Allied Health Manager Steve Joslin.

“There’s a lot of causes of cancer that might be avoided by eating properly and just being physically active,” Joslin said.

Other causes of death, he said, may be a result of Rowan County’s aging population. The rate of Alzheimer’s disease as a cause of death has decreased but is still the fifth leading cause of death in Rowan County, according to the report.

To address the most critical health issues outlined in the report, Joslin said the health department picked a list of priority issues. The top three priorities cited in the report are access to oral health care, reducing obesity and reducing tobacco use. Other issues the report cited as important to address were teen pregnancy, physical fitness and prescription drug abuse.

“Sadly enough, a lot of people don’t make those life-changing decisions about their lives until, unfortunately, they run into chronic disease  or someone close to them gets sick or dies,” Joslin said. “We all need to be better prepared, and we all need to take care of ourselves.”

Being active, eating healthy and living tobacco free are listed as ways to reduce Rowan deaths from the causes listed in the report.

For some, Joslin said, being active becomes more difficult when there’s not a readily accessible location to exercise. An expansion of the Salisbury Greenway, a series of linear parks in north Salisbury, and a bicycle and pedestrian plan that spans Salisbury, Spencer and East Spencer are listed as solutions to Rowan County’s health problems. Rowan County joining the Carolina Thread Trail — a series of greenways and trails across multiple counties in the Carolinas — is also listed as a way to improve health. There are parts of the thread trail in Kannapolis and Mooresville, but none in Rowan County.

Eliminating food deserts — areas without easy access to fresh fruits and vegetables — is another priority listed in the report.

A full copy of the report is available on the Rowan County Health Department’s website under the “Healthy Rowan!” tab.

By Josh Bergeron josh.bergeron@salisburypost.com Even as Rowan County’s leaders push for economic development at every turn, the area’s economy is... read more