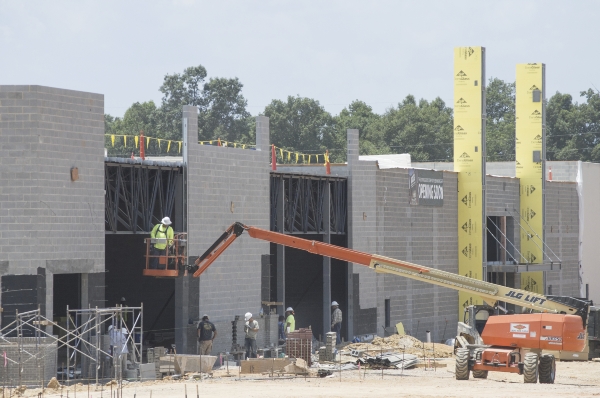 Construction crews work on the future site of Dicks Sporting Goods at a site off of Julian Road in 2015. File photo Josh Bergeron / Salisbury Post – The Summit Coroporate Center, on Julian Road, has been a mecca for construction activity in recent months. A retail complex and regional headquarters for Agility Fuel Systems are both being build at Summit.

Even as Rowan County’s leaders push for economic development at every turn, the area’s economy is already slowly growing, according to more than a decade of tax data.

Building inspections are up. The overall tax base is increasing. And, growth along the southern section of Salisbury bodes well for the future, county leaders say.

County Manager Aaron Church said the total tax value of all property in Rowan County — referred to as the tax base — is partially a result of inflation. Inflation alone isn’t the only cause, Church said, as Rowan’s population has grown by several thousand since 2,000, according to Census data.

The rate of growth for Rowan isn’t as sharp as its southern neighbor — Cabarrus County — but it’s a growth rate that’s been called healthy and sustainable by Rowan County’s leaders.

With Rowan County sandwiched between the Charlotte Metropolitan Area and Piedmont triad, local and state leaders have long hoped growth would spread over the area’s southern border or trickle down from the North.

A portion of Rowan County’s growth is, surely, a result of its geographical location, said County Commission Chairman Greg Edds.

“Because of our geographical location, we really couldn’t help but grow to some extent,” Edds said. “It’s really heading in our direction from the South and North. Our challenge is to create a significant supply for the demand.”

“In the last five to 10 years, we have seen a sustainable growth rate and a series of new investments,” Van Geons.

A look at the most recent data results in a less optimistic outlook for Rowan County.

Every four years, staff in the Rowan County Tax Assessor’s office complete a revaluation of all property. This year’s revaluation resulted in the average value of property decreasing slightly — about 1 percent.

The growth rate cited by Church and other county officials — a 0.79 percent increase — refers to the tax base rather than tax value. Buildings, equipment and other structures are popping up in Rowan County at an increased rate rather than average values rising.

Edds and Van Geons stress that some developments haven’t begun paying taxes on property yet as a result of recent construction. Both focus their attention on Summit Corporate Center on Julian Road.

Neither Agility Fuel Systems nor a retail complex along Julian Road is completely finished with construction. As a result, property and sales tax can’t be measured.

“Nothing breeds success like success, and nothing generates more interest than closing deals,” Van Geons said. “As long as we have the capacity and infrastructure in place to take advantage of that continued interest, then we will see continued growth.”

Another significant economic development in recent months is an aircraft charter company — Strategic Moves LLC — moving from Statesville to the Rowan County Airport. The company plans to lease the airport’s largest hangar and build office space adjacent to the facility.

Shortly after the announcement, the Rowan County airport’s board voted to build an identical hangar with a slightly smaller office space.

“There is a marked and significant interest in Rowan County, and we see that continuing,” he said. “And, in order to keep up with demand, you have to keep expanding your supply.”

He referenced new residential and commercial properties as future possibilities, which would increase Rowan County’s tax base further.

Edds said he’s often questioned about the number of jobs brought to Rowan as a result of economic announcements. The types of business and industries, he said, would have to be varied in job numbers for growth to be balanced.

“Some facilities will be intensive on property values and skinny on jobs. Others will be very job intensive but not provide much in the way for tax revenues,” he said. “Some facilities may do both. It’s an important thing for folks to understand that there is a value to the community in whatever may come to Rowan County.”