Pool has been keeping summer cool for 50 years 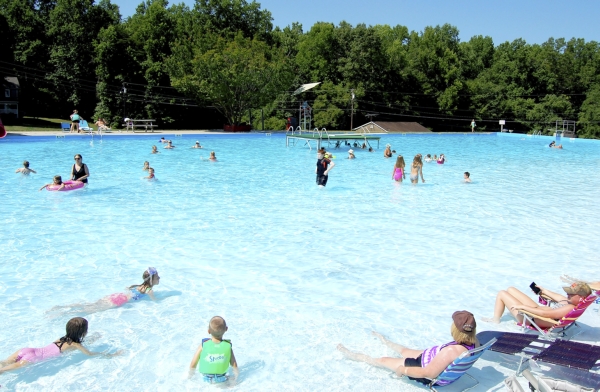 Blue Waters Pool, on Faith Road south of Faith, is celebrating its 50th anniversary this summer.

FAITH — It was barely 10 a.m. Wednesday morning and the temperature was already in the upper 80s and climbing toward the mid 90s. The heat from the rising sun coming down on an early summer day.

At Blue Waters Pool, just north of the corner where Faith Road meets Hwy. 152, people, young and old, arrived seeking relief from the heat. Some came for the first time. For others, the pool is part of their summer tradition.

Kids were swimming, sliding and jumping in the cool, clear water. Parents were lounging in chairs set in shallow water near the pool’s edge.  Lifeguards on duty occasionally blew their whistle to get the attention of a youngster.

Towels were laid out on the concrete next to sandals and bags filled with sun lotion and snacks. Kids waiting to take a swim test lined up at one corner of the deep end of the pool. Lifeguards walked next to the pool’s edge, following along as each test taker swan 40 feet or so to a ladder.

Jimmy Roseman and his wife, Crystal, were in the shade, standing behind the counter where people pay and get a stamp on their hand — their pool pass.

Jimmy, like his father before him, owns and operates the pool. His father, J.C., opened the pool in 1965.  Before that, it was a private lake that J.C.’s brother, M.L., operated as a pool, but with little success.

J.C., who was a contractor and brick mason by trade, along with help from the Roseman family and children in the area, laid the bricks to make the lake into a proper pool. The pool is 100 feet by 200 feet — 200,000 square feet in all.

“That’s a lot of brick,” Crystal said. She’s worked at the pool for nearly 30 years and met Jimmy at Blue Waters when she was 13. They started dating in their early 20s and have been married for 28 years.

The bricks are still there too, but are now covered by concrete. Jimmy, now 51, started running the pool in the mid ’90s before taking ownership. His father passed away in 2007.

He and Crystal live on the back edge of the Blue Waters property and ride a golf cart to work each morning. The couple comes across as mellow and relaxed, which comes as no surprise considering they spend everyday by the water.

Each year, the pool opens the weekend after Mother’s Day and stays opens until before school begins in August. The pool is open from 10 a.m. to 6 p.m. Monday through Saturday and 1 p.m. to 6 p.m. on Sundays.

“This is seven days a week,” Jimmy said about running the pool, adding he and Crystal often put in 14-hour days.

They started doing live music, like gospel and classic rock, at the pool the last couple of years.

Jimmy grew up in the apartment adjacent to and overlooking the pool. Now, he rents it out. He also manages other rental properties, which keeps him busy in the offseason.

The pool has been his whole life, Jimmy said. “I don’t know anything different.”

The pool’s lifeguards, about 15 in all, are made up of high school and college students. Five are on duty at a time. There’s also people who work at the grill and snack bar. Blue Waters also has batting cages and an arcade.

With all the people they meet, Jimmy and Crystal have made plenty of friends at the pool over the years.

She and Jimmy have watched children grow up, and then bring their children to the pool, Crystal said.

Sally Eudy was at the pool with her son, Cooper. She lives in Albemarle, but she and her friends have had season passes at the pool for a couple of years now and come to Blue Waters two or three times a week. She said they like the friendly owners.

Jimmy said a lot of people come from outside Rowan County to spend a day at Blue Waters.

Cynthia Buckwell, of Bethel Bear Creek Church in Mt. Pleasant, has been bringing kids to the pool several times each summer for nearly 30 years.

“They love it,” she said about the children.

Jimmy grabbed a mic and announced over the pool’s speakers that it was time for 10-minute swim break. People got out of the pool and a sense of calm took over. The motionless water made it feel like time was standing still.

It’s good to take a break, Jimmy said, it lets families reconnect and the lifeguards can relax their focus.

When the break was over, it was back to yelling, splashing and enjoying summer.