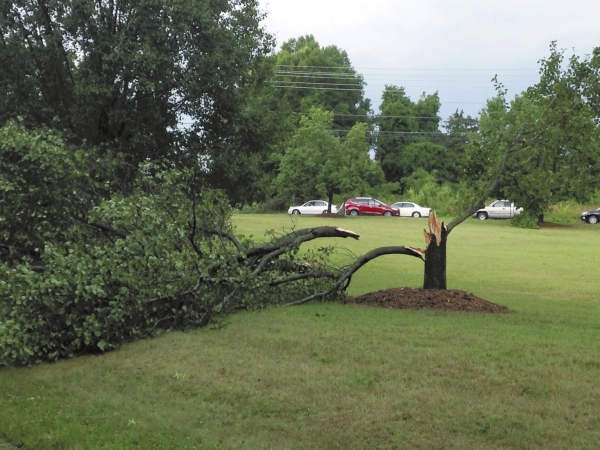 A tree, on the property of Gospel Light Baptist Church, on Mooresville Road, broken by Friday afternoon's thunderstorm. There were at least two other trees on the church's property that met the same fate. Dennis Davidson/Salisbury Post

When a string of severe thunderstorms blew through Rowan County Friday afternoon, large swaths of people were left without power and one person was sent to the hospital after suffering burn injuries.

As of Friday evening, close to 3,000 Duke Energy power customers were without electricity. The largest number of outages were focused in northern Salisbury, near Catawba College, and off of Mooresville Road, just west of Salisbury.

A group of outages was also reported near the intersection of South Main Street and Mooresville Road in Salisbury.

The outages persisted for several hours after thunderstorms moved out.

Just after the storm, an unnamed Norfolk Southern employee was transported to Novant Health Rowan Medical Center when a telephone pole near the employee was struck by lightning.

A male Norfolk Southern employee was preparing to flip a railroad switch for an approaching train when he was shocked by a lighting bolt that struck a nearby telephone pole, said Spencer Fire Chief Jay Baker.

Baker said the man had burn marks near his ankles, but was conscious and responsive.

The man was with other Norfolk Southern personnel when the incident occurred, Baker said.