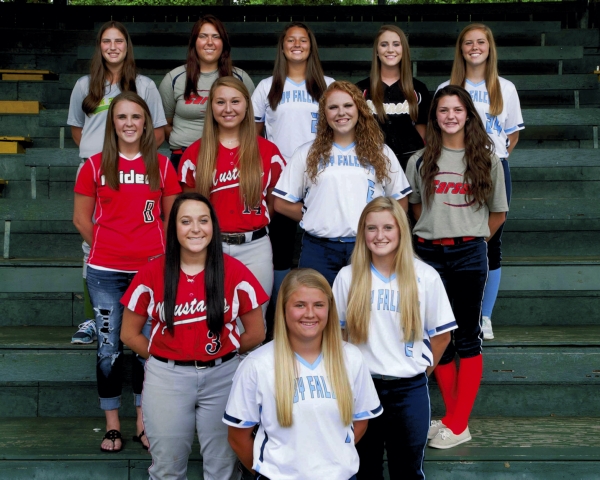 “I’ve never seen anything like them,” said Taylor Martin, West’s second baseman and someone who has batted in front of Gibbons for years. “I’ve never seen the ball come off anyone’s bat as hard as it comes off of Hunter’s. Even when she pops up, it’s amazing how high the ball goes. That’s a bat you can’t replace.”
Hopefully, pitchers enjoyed Gibbons’ occasional pop ups. The majority of the time, she hit the ball on a line somewhere. She batted .513, driving in 32 runs and scoring 28. She hit for power as well as average for the South Piedmont Conference champs — 11 doubles, four triples and six homers.
The Western Carolina signee also was a difference-maker in the field as as a mobile, rifle-armed shortstop.
Gibbons repeated as SPC Player of the Year and is the back-to-back winner of the Rowan County Player of the Year honor.
“She’s just an elite athlete,” West Rowan coach Jimmy Greene said.
Gibbons started playing on softball travel teams at 7 years old. There’s a lot of natural ability there, but she’s also worked at it for a decade to become a Division I player.
“It’s crazy to see how much she’s grown as a player over the years,” West Rowan catcher Marissa Yow said. “She works hard, she plays hard, she practices hard. She wants to do everything perfect.”
Gibbons’ stats as a senior were down slightly from her amazing junior season (.557, 10 homers, 35 RBIs), but she’s not a stat-conscious person.
West Rowan defended its SPC title, and that’s what mattered most to her. After winning in a surprise in 2014, the Falcons backed it up with a second title when everyone was gunning for them.
“I know I could’ve done better this year,” Gibbons said. “But the winning is what I enjoy. It made me upset anytime the team lost.”
Gibbons was a sizzling 18-for-27 (.667) in the Falcons’ eight games against Rowan County opponents. In those eight games, she scored 16 runs and drove in 11.
She had player of the year competition from teammates.
Junior Peyton Greene was a special two-way player for the Falcons, with a .464 batting average, five homers, 28 RBIs and a 16-6 record with 146 strikeouts in the circle.
Freshman center fielder Parker Greene (.513, 28 RBIs) produced offensive stats almost identical to those put up by Gibbons — except for the home runs.
The other player considered for player of the year was East Rowan senior catcher Kaleigh Troutman. The Lander signee powered six homers, batted .444 and had a .532 on-base percentage.
Two more Falcons made the 12-girl all-county team.
Yow, headed to D-I Radford, batted .408 and drove in 19 runs. Martin, a Catawba commit, was awesome in the field at second base (two errors) and knocked in 17 runs as a leadoff hitter.
Junior hurler Caroline Forbis led Salisbury to a playoff berth. She was runner-up for Central Carolina Conference Pitcher of the Year.
Carson senior pitcher Lacee Hunsucker, heading to Mars Hill, made a comeback from ACL surgery and was instrumental in the Cougars winning nine SPC games. Besides getting it done in the circle, Hunsucker led the Cougars at the plate, batting .431 with five homers.
Sophomore Bree Medlin handled most of the pitching duties for East Rowan and batted .402 as the Mustangs’ leadoff hitter.
Senior second baseman Caroline Hubbard led South Rowan in runs and RBIs and smacked nine doubles.
Sophomore shortstop Ashlyn Mills batted a sensational .556 for the Cavaliers.
Carson sophomore third baseman Brie Bauer batted .382 and was sharp defensively.