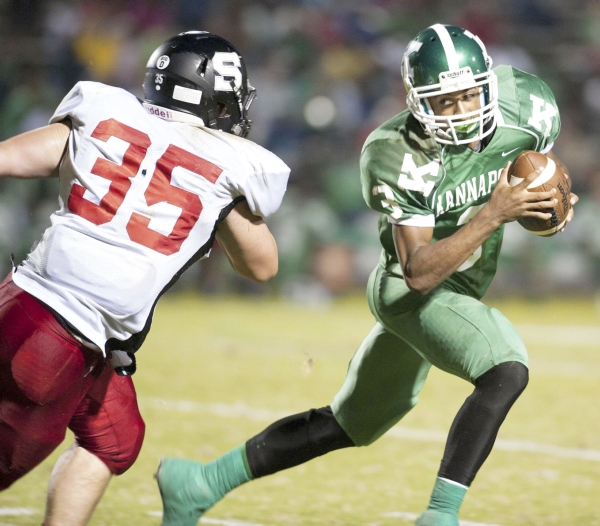 KANNAPOLIS — Damon Johnson is the first A.L. Brown athlete in a decade to make all-conference in football, basketball and baseball.

Garrett Sherrill was the last to accomplish the feat in 2005.
The 6-foot Johnson, a basketball guard, baseball outfielder and football quarterback, still has a year of high school athletics ahead of him.
“All-conference wasn’t something I set out to do because my goals are team goals,” Johnson said. “But it means the world. It means people saw something in me.”
It’s not a tight race as far as which sport Johnson prefers.
“I love playing all three and I love my coaches in all three sports like dads,” Johnson said. “But this town’s sport is football. Football is where my passion is.”
One-sport specialization is the norm, but Johnson always has played the three traditional major sports, each in their season, like athletes of previous generations.
“Sports are my social life and I’d be bored without them,” Johnson said. “My dad (Tarus Johnson) is my role model and he encouraged me to play all three sports like he did. My little brother (age 11) plays all three sports.”
Tarus Johnson is remembered for his football exploits as a running back and linebacker in the early 1990s at A.L. Brown. He went on to play college football and had pro baseball tryouts.
A.L. Brown football coach Mike Newsome is a human encyclopedia of information when it comes to multi-sport athletes. He’s studied the subject. He punches keys on his computer to prove it.
“Out of the 256 NFL draft picks, 224 were multi-sport guys,” Newsome said. “I encourage guys to play everything and most football coaches do. It helps guys be successful at a high level.”
A.L. Brown basketball coach Shelwyn Klutz and baseball coach Empsy Thompson were multi-sport athletes in their playing days and both played football for the Wonders. So there’s never been anything but encouragement for Johnson. Coaches share him when sports overlap.
In recent weeks, Johnson has been a leader in the Wonders’ “Summer Warriors” football effort, but he’ll also attend Klutz’s “open gyms” this summer to work on his jump shot.
Johnson is light (165 pounds), but he has quickness, speed and a very strong arm.
Newsome believes Johnson is poised for a tremendous senior year.
Johnson entered the 2014 season still competing for the No. 1 job, but he threw for 1,498 yards and 19 touchdowns while running for 552 yards and six touchdowns. Johnson passed for a career-high 253 yards in the season-ending playoff loss to Reagan. He rushed for 170 yards (85 on one snap) against Mallard Creek. He threw three TD passes in three different games and he did a lot of that while on a sore knee.
“I pushed through it and played hurt,” Johnson said. “The team needed me, and there’s a difference between being hurt and being injured.”
He’s healthier now, after rehabbing with assistant coach Todd Hagler, and he goes in to his senior season as the unquestioned No. 1 QB.
“I’m a lot stronger, a lot faster and my football I.Q. is higher,” Johnson said. “I’m more experienced and more focused. I don’t even hear the crowd anymore. I just see the game and what needs to be done.”
Newsome is as upbeat as a cheerleader and had no reservations about showering praise on Johnson.
“I’ve coached nine guys who played in the NFL and 150 college players,” Newsome said. “As far as athletic ability, Damon is up there, one of the best. He is right where we want him to be. He’s grown physically and mentally. His football knowledge has grown. There are a lot of expectations on his shoulders for his senior season, but he’s ready to meet them.”
Newsome got on a roll as far as how special an athlete Johnson is.
“If we put him at receiver, he’d be our best receiver and you could say the same thing for cornerback or safety,” Newsome said.
The Wonders, 6-6 last season, will get a fresh start a day earlier than expected. They’ll play Concord at Memorial Stadium on Thursday, Aug. 20. The game will be broadcast live by Time Warner Cable. By NCHSAA rules, it can’t be televised on Friday, but it may be an even bigger event on a Thursday when every football fan in the state can see what the “Bell Game” is all about.
The towns have played each other in football annually since 1931. While it’s non-conference now, major bragging rights are at stake.
“Having the Concord game on TV makes it 10 times more exciting,” Johnson said.
Concord has won the last three meetings.
The Wonders return outstanding running backs Sandon McCoy and Jayln Cagle, in addition to Johnson.
Johnson didn’t offer a prediction about opening night but he did have a forecast for the season.
“We’re a different team,” Johnson said. “Last year we went into games knowing we had to outscore opponents. I have no doubt our defense can be special this year.”
The Wonders lost 48-35 to Vance, 52-35 to Mallard Creek and 50-42 to Reagan. With more defense, they may do some damage.
Johnson dutifully marks his calendar each day as football season inches a bit closer.
He’ll be counted on by Newsome to set the tone and lead a winning team.
“Beyond the athletic ability he has, Damon hates to lose,” Newsome said. “That’s a trait that all the really good ones have.”