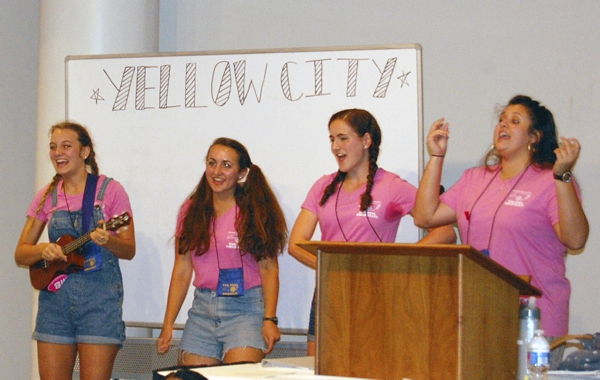 After 26 years at the helm of Tar Heel Girls State, Kaye Brown Hirst is passing the baton.

Girls State is an annual weeklong program sponsored by the American Legion Auxiliary that teaches female rising high school juniors about state government in an immersive and interactive environment.

They “create a mythical state government in a week,” Hirst said.

Each attendee is called a citizen, and they build their government from individual towns all the way through state government. They learn to use parliamentary procedure, write city charters, elect leaders and pass legislation.

The girls also learn their rights and responsibilities as a citizen.

In order to be accepted to Girls State, girls must be in the top third of their class and be interested in leadership.

“We throw so much at them,” Hirst said. “It’s not for everybody.”

She added that the girls have to be willing to put in some effort to benefit from Girls State.

Girls State is in every state in America, except for Hawaii. North Carolina’s program is average sized, with 250-300 girls attending each year. Tar Heel Girls State is the only program in the nation to run 76 consecutive years – since the program was established.

“There is so much out there for girls these days,” Hirst said, but added that Girls State “still remains one of the highest respected programs” and that it carries considerable weight on college and scholarship applications.

Although Hirst never attended Girls State as a citizen, she was familiar with the program as a student.

When she joined, Hirst moved through the ranks of North Carolina’s American Legion Auxiliary fairly quickly. If she were to move any further up, she would have had to travel extensively for at least three years. With a 7-year-old son at home, Hirst didn’t want to spend so much time away from her family.

In order to keep her involved, she was appointed to the Girls State committee. After two years, she became the Girls Sate chairman.

Since then, she’s taken 28 weeks of vacation to run Girls State.

Hirst said the program’s undergone a lot of changes since she became chairman.

She’s most proud of moving the program to Catawba College creating a reputation of an excellent staff.

After several years, Hirst decided to find a new location for Girls State.

“Never in my wildest dreams did I imagine it would end up here (Catawba),” Hirst said.

A group of local community members realized what Girls State could do for the area, so they worked together to make Girls State the most attractive offer possible.

Their hard work paid off. After 62 years at the University of North Carolina at Greensboro, Girls State moved to Catawba College. It has remained there for the last 14 years.

“It was a big change for us,” she said. “It has been a beautiful relationship.”

“We were embraced by Catawba and the community,” Hirst said.

“Catawba was smart,” Hirst said, adding that high school students who spend an entire week on a college campus and who have an enjoyable time, are much more likely to consider attending that college.

The college ensures admissions advisers are available during Girls State check-in and check-out for any girls who have questions about the school or who are interested in going on a tour.

Another big change Hirst implemented is how Girls State is staffed.

She decided to bring back former citizens as counselors and leaders.

“That’s one of the greatest strengths of our program,” she said.

This year’s Girls State staff had more than 350 years experience between them.

Julie Cooper has served as Girls State’s program director since 1998, but before that she was a citizen, a junior counselor and a counselor.

Tar Heel Girls State is nationally recognized for the quality of its staff.

“You get involved with it and you stay with it,” Hirst said. “We’re known for a very strong program.”

Hirst recently lost her mother, and with an elderly father and other family responsibilities, she said she felt it was finally time to pass Girls State along to someone else.

“I need to slow down a little bit,” she said.

She added that she’ll miss the people the most.

“These are lifelong friends,” Hirst said.

Hirst is confident that her replacement, Barbi Creech, will excel – Hirst trained he herself, after all.

“I do leave it in good hands,” Hirst said.

Creech, a retired educator from Cary, has been involved with Girls State for 14 or 15 years.

Hirst said she won’t be able to stay away forever, however.

“I’ll come back at some point,” she said, adding that she had to “make sure they’re doing it right.”