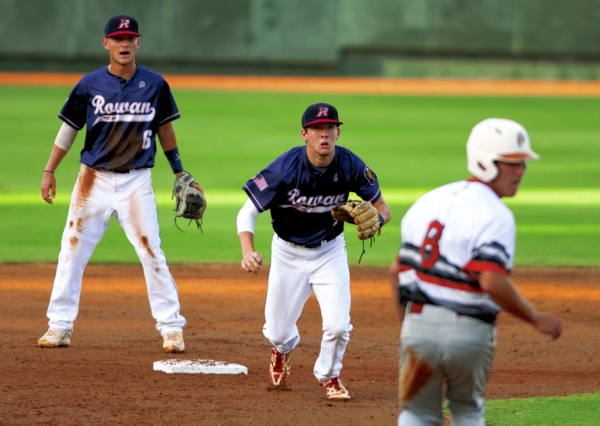 SALISBURY — Football and basketball coaches can put the ball in the star player’s hands for the final play, but baseball coaches don’t have that luxury.

And so Rowan County’s 6-5 win against Davidson County Post 8 on Saturday night came down to Rowan’s fourth pitcher, John Owen, against Davidson County reserve Nick Borgen, who was pinch-hitting with the bases loaded and two men out in the ninth inning.
Owen, a rising junior, spent the high school season as East Rowan’s catcher out of necessity, but he’s a pitcher by trade, and he proved that he is a hurler by winning a nine-pitch duel with Borgen that finally ended the struggle at Newman Park.
“That kid had a great at-bat,” a relieved Owen said. “I got ahead, but then I couldn’t get a fastball by him. He kept fouling them off. Finally, I got him to hit a ground ball on a fastball.”
That ground ball was nearly a two-run single, but Rowan County third baseman Juan Garcia darted toward the hole, gloved the ball, and after looking at second, made a powerful, accurate throw across the diamond to first baseman Hunter Shepherd — sending Rowan fans home happy.
“Now that was a scary game,” Rowan slugger Riley Myers said.
Rowan (11-4, 6-0) stayed unbeaten in the league standings and won its ninth straight game.
“Rowan is a great team, but we feel like we’re a good team,” Davidson County coach Dale Moser said. “Hats off to Rowan because they were able to string their hits together for one big inning. We had chances, but we couldn’t do that. We kept grounding into double plays.”
Rowan County turned four double plays.
Rowan County ace Omar Bautista wasn’t sharp, but he got double-play grounders in the first and second innings, and the fences at Newman Park were just deep enough to contain several drives by Post 8 in the third. Bautista enjoyed his first routine inning in the fourth, but when Justin Freeman led off the fifth with a screaming double and the next two Davidson County hitters walked to fill the bases with no outs, Rowan coach Jim Gantt went to his bullpen.
Answering the call was lefty Bryan Ketchie.

Ketchie was the star of the game.
“Bases loaded, no outs, I really needed a strikeout, and I got one,” Ketchie said. “Then, I needed a ground ball for a double play, and I got that too, and we were out of the inning. I had my change up and curveball working, and I was locating the fastball. I did my job, but that was a good lineup we were facing. That’s a team that can hit.”
Davidson County’s failure to score in the fifth inning was the turning point, but it wasn’t like Rowan was doing anything. Davidson County right-hander Michael Horrell was mowing down Rowan hitters.
“He’s a Division I guy headed to Campbell and he was good,” Gantt said. “We were fortunate to win because if they don’t hit double-play balls at people they might score a bunch of runs. But credit our guys with finding a way to win. Finding a way is the key.”
The scoreboard finally changed in the sixth inning when Christian Dix punched a hit on an 0-2 pitch to give Davidson County a 1-0 lead.
Booming drives to the center-field wall by Myers and Heath Mitchem made it 1-1 as Rowan answered in the bottom half of the inning.
Joe Butts delivered a run-scoring hit for a 2-1 Davidson County lead in the seventh, but Horrell’s night was over after six innings and 98 pitches. Then in the bottom of the seventh, Rowan scored five times against reliever Tyler Rhodes to take control.
“Rhodes has been good all year, but we’ve got injuries and we needed him to play the outfield before he came in to pitch,” Moser said. “That probably was a factor.”
Kacey Otto’s double down the left-field line ignited Rowan’s big inning. Infield hits by Harrison Baucom and Michael Caldwell kept it rolling. RBI-doubles by Garcia and Myers and a run-scoring single by Dustin Ritchie followed.
“I hit two off the wall, but I guess I don’t have quite enough juice to get it out,” Myers said with a laugh. That first pitcher for them was tough. He had two different breaking balls. We were just glad to get a chance to hit against their bullpen.”
Ketchie maintained the 6-2 lead in the seventh and eighth innings. Mitchem was supposed to shut the door quietly in the ninth, but two errors and two walks got him into trouble. An error made it 6-3. A hit by Zack Shoemaker made it 6-4. When Dix walked with the bases loaded, it was 6-5. That’s when Gantt called on Owen.
“This one was a team effort,” Gantt said. “A lot of guys did good things. Otto had a great game running the bases aggressively, and our pitchers battled.”
It was a tough loss for Davidson County, but Post 8 (7-8, 3-3) got four hits from Michael Garvey Jr. and showed it can be a factor the rest of the way.
“Very proud of how we fought back,” Moser said. “It was a heck of a game and a playoff atmosphere.”