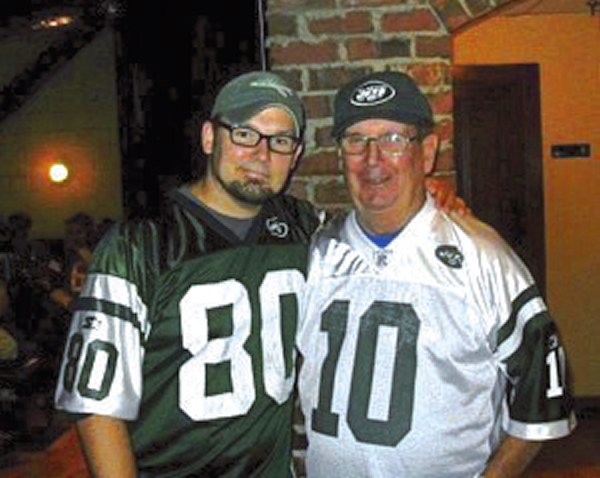 James A. Rockwell and son Mark together before he passed away. The photo was taken at Dillworth Neighborhood Grille in Charlotte one Sunday during football season in 2011 during a game/meeting of the Charlotte Jets Fans.

The family participates in the Hands & Feet Project. Mark Rockwell and his family sponsor two children through the Hands & Feet Project. This young man is Nickenson, age 3

Mark Rockwell and I became colleagues when he began teaching fourth grade at Mt. Ulla Elementary School 15 years ago fresh out of college. I was the music teacher at the time. During the next few years, I saw Mark develop into an awesome, caring teacher. After I retired, I lost contact with him until a few years ago. It was one day while substituting at Millbridge that I discovered he was a teacher there.

Quickly renewing our acquaintance, we then shared a few stories from our years together at Mt. Ulla. Even though I always knew Mark was a great teacher, it wasn’t until this year that I discovered he’s also a talented writer. I made that discovery quite by accident when I found his website and blog a few months ago. The blog described his journey as a Christian facing his dad’s diagnosis of terminal cancer. Seeing such tremendous faith and love, and thinking this would be an inspirational Father’s Day tribute for others to read, I asked if I could share his story. Mark agreed, “but only if God gets the glory,” he said. Here is part of Mark’s tribute to his dad, James A. Rockwell.

Just after midnight, Feb. 20, 2015, marked three years since my dad passed away. Simply put, he was a hard-working man who seemed to routinely get the short end of the stick, regardless of the fact that he was usually the first person ready to help somebody else out when they needed a hand. Thankfully, after several conversations with him in his final months, I know he was able to pass with the assurance of having accepted the hope and forgiveness of Jesus.

His character was a testament to the way he was raised by my Grandma and Grandpa on a small upstate New York farm where responsibilities and chores took precedence over personal interests or entertaining distractions that were more available to other kids his age in the ’40s and ’50s. His interactions with others rarely happened without involving some kind of neighborly kindness. He always enjoyed visiting older neighbors, relatives, and friends, and his 1952 John Deere Model M tractor was kept busy plowing neighborhood driveways during every upstate New York winter that I experienced growing up. I’ve always known him to lend a hand when it came to construction projects, emptying water out of the elderly neighbor’s basement when it routinely flooded after rainstorms, and taking the neighbors trash with him when he was headed to the landfill.

Such tasks were in addition to the family responsibilities that he quietly fulfilled in giving help to his two brothers, elderly aunts, uncles and parents. In addition, he always had time to visit and listen. I could often find his car or truck parked in our elderly neighbor’s driveway where he would be seated at the kitchen table with her visiting and drinking a no-frills cup of black coffee.

Years later, after he moved south to North Carolina to help provide daycare for our newborn son, he became my dependable partner in getting up at 3:30 a.m. to prepare and serve Saturday morning breakfast each month at the local homeless shelter. He always modeled what it meant to be a good man without ever opening his mouth to talk about what he was doing or telling others what they should be doing.

He never let his circumstances become either license for arrogance or a calling card for sympathy like so many others do. Instead, he always walked tall and held the line letting his actions speak louder than his words. Now, on the other end of life in which he has already faced an unfair number of low blows, I am still learning from his example as he faces one of his toughest challenges in the form of brain cancer.

What started out as a routine trip to the doctor’s office to figure out why he was having digestive problems led to the discovery of an intestinal blockage caused by a carcinoid cancer tumor and surgery to remove it. It was during his recovery from the surgery and a follow-up visit to the surgeon’s office that his journey took a turn for the worse. Instead of slowly becoming more mobile and independent while recovering from surgery he began exhibiting diminished motor skills and increased weakness on his right side. His surgeon called some neurological specialists into his office visit to examine him and, as a result admitted him back into the hospital where a CT scan revealed a mass on the left-rear lobe of his brain. The mass was what would turn out to be a grade four, malignant, glioblastoma multiforme brain tumor.

It was just after this diagnosis when I asked him, in a moment when it was just the two of us in his hospital room, what he was thinking and how he was feeling about what was happening. He answered, “One day at a time, Mark. We’re just going to keep putting one foot in front of the other and take it as it comes.”

His philosophy went on to become the motto for TEAM JIM which raised over $3,000 over the course of three years for brain tumor research at the Preston Robert Tisch Brain Tumor Center at Duke University Hospital. Just as significantly for me personally, though, his perspective has guided me as his medical power of attorney, caretaker, and son throughout this journey. Much like his preference for basic black coffee, he taught me that a simple approach is sometimes the best approach to the ups and downs that we are faced with in life.

With so much out of the reach of my control, prayer has been the steady mast holding up the sails on this ship so that it can continue moving forward, from my dad’s initial diagnosis on through each day of his 16-month battle until he passed away February 20, 2012. Faith still serves as the kite string that keeps me centered amidst winds of grief that continue to blow through my life since he passed away. It has been the walking stick providing stability as I’ve continued to put one foot in front of the other.

Philippians 4: 5 and 6 (NIV) says: “Do not be anxious about anything, but in everything, by prayer and petition, with thanksgiving, present your requests to God. And the peace of God, which transcends all understanding, will guard your hearts and your minds in Christ Jesus.”

I will continue to drink my daily coffee black and put one foot in front of the other as my dad always did. At the same time, I will try, each day, to not be anxious about anything, but, instead present my heart to my father in heaven with thanksgiving for the model of perseverance that He gave me in my dad and the hope that I will see them both when my own journey is through.

Although Mark was a Christian before his dad passed away, several events occurred afterwards that drew him even closer in his walk, helping him to see the importance of helping others. As a direct result of these events, Mark became involved with the Hands & Feet Project. The goal of this organization is to provide care for orphaned and abandoned children in Haiti, the poorest country of the Western Hemisphere.

During January 2014, Mark had the opportunity to travel to Haiti with the Hands & Feet Project. While there he worked side-by-side with volunteers and team members doing maintenance work and establishing relationships with the kids who live there. Touched by what he saw and encouraged to do even more, Mark plans to go back to Haiti with his wife, Angela, this summer.

With so much more to the story, I asked Mark if he would fill in the gaps in the coming weeks, explaining not only how serving breakfast at the Homeless Shelter in Salisbury is an integral part, but also how he became involved with the Hands & Feet Project as a direct result of taking care of his dad’s estate. Wanting to encourage and inspire others, Mark agreed, planning to share more details soon. He also plans to write about his trip to Haiti this summer and the progress being made with the children’s village there.

When a loved one passes we often look at it as the end, but sometimes it’s only the beginning. Having lost my husband, Michael, last year I understand that kind of pain and grief. When the loss is fresh, it’s hard to look past the moment and think of a future without them. For me, as time has passed, I’ve come to realize we’re left behind for a reason and if we patiently wait and earnestly seek, we’ll find that reason.

I believe Mark has found his. If you’d like to read more of Mark’s tribute to his dad, check out his blog at https://gracemark.wordpress.com/2011/10/23/black-coffee-my-dad-and-peace-that-passeth-understanding/

Mark, your dad would be so proud.

Dicy McCullough’s latest book, “Tired of Being Obedient,” is available at local bookstores and Amazon.com. It includes Glenn Sherrill as the main character with tips for training dogs in the back. Contact Dicy at 704-278-4377 or vist www.dicymcculloughbooks.com

Submitted by Pamela Jackson. This is the third in a series of reports on the progress of local pastor George... read more