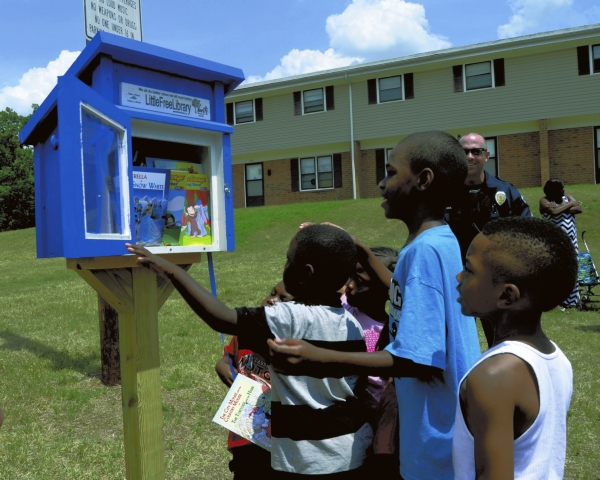 Salisbury Police officer Shane Hill looks on as a group of children find a book from the newly installed Little Free Library that was erected at Zion Hills Apartment complex. The box was donated by Rowan County Rotary member Greg Dunn and the majority of the books came from officers and others in the community. Shavonne Walker/Salisbury Post

The smiles on the children’s faces spoke volumes as they lined up despite the heat to get a book to read at Zion Hills Apartment complex’s newly erected Little Free Library.

A wooden box painted blue was placed at the edge of the playground and bears a Salisbury Police placard and the Little Free Library moniker on the front. The concept is simple: create a place for children and adults to obtain books at no cost and even to donate some books.

No library card is needed to borrow the books, and no fines are administered if they aren’t returned. However, those who take a book are encouraged to return a book.

This isn’t the first Little Free Library in Rowan County, but it is one of few in local neighborhoods. There are about five of these similar boxes at or around area schools. The first library was placed at the corner of Mitchell Avenue and Fulton Street in the Fulton Heights neighborhood by Shelley and Jon Palmer.

The idea for this library was a collaborative effort by Greg Dunn, who is active in the Rowan County United Way and is a member of the Rowan County Rotary, and the Salisbury Police Department.

Dunn had seen the libraries throughout the county and thought, why not place one in a local community. So he asked fellow Rotarian Salisbury Police Capt. Melonie Thompson her thoughts on involving officers.

“I had seen where they were good for building a community,” he said.

Dunn was aware of Rowan-Salisbury School System’s push for literacy among its students and the need to keep children reading during the summer. He provided the materials and had the library registered. The library is the 25,290th chartered library through the nonprofit, Free Little Library.

“I said, ‘Put it where you think it will be the most effective,’ ” Dunn recalled of his conversation with Thompson.

Salisbury Police officers quickly began buying books, as well as seeking out family and friends to help them fill the library.

“The officers assigned to our Street Crimes Unit took advantage of an opportunity to partner with a citizen to place youth-appropriate reading material near the playground at this apartment complex,” said Police Chief Rory Collins.

He added the department hopes that the youth will take advantage of the library that will “provide them with something constructive and positive to do during the summer months.”

Collins said he couldn’t be more proud of the officers and staff involved in the project.

“It is crucial for our young people to see police officers in a positive and caring light,” he said.

Collins said while it’s important for officers to work hard to fight and deter criminal activity that plagues neighborhoods, it’s just as important the officers be involved in projects like this in order to “help reach the root cause of some of the issues negatively impacting our quality of life.  Issues as complex as illiteracy, and as basic as idle time, can help lead to opportunities for delinquency and eventually other tragic consequences.”

Keyosha Wansley likes to read to her children and said this library will give them something positive to do this summer.

“It’s nice. It’s a good idea for them to do this because they didn’t have to do it. My little girl loves to read,” she said.

Her son, Khalil, 9, and daughter Kymari Davidson will benefit from the library being in their neighborhood, she said.

“It means a lot to my kids. They love to read,” Steele said.

Sefora Hendren and her son, Hunter, 8, stopped by the library to donate some books.

“It’s important for kids to have it. Learning is very important,” Hendren said.

She said her son is the type of child who wants to help others and this was a great way for him to do so. He donated a number of his own books and comics.

The libraries were started in 2009 by Todd Bol of Wisconsin, who built and placed a replica of a one-room schoolhouse as a tribute to his mother, a former school teacher who loved reading, in his front yard.

His goal was for communities to help erect at least 2,510 libraries, and he has far exceeded it with more than 25,000 libraries throughout the world.

For more about Free Little Libraries, visit www.freelittlelibrary.org, and to donate books to this particular library, contact the Salisbury Police Department at 704-638-5333.

4 p.m. — A librarian and recent college graduate are among the nine people killed by a white gunman in... read more