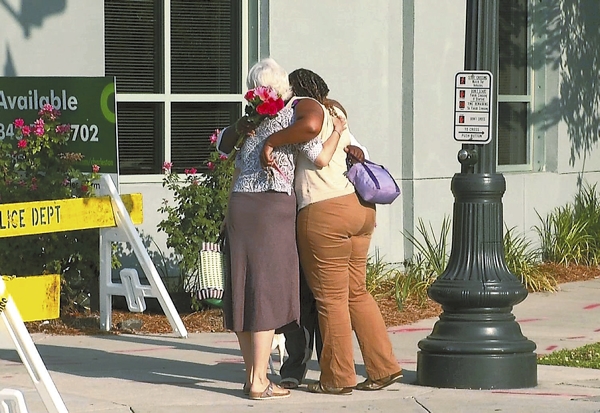 The Rev. Anthony Smith said Thursday he felt shock, hurt, pain and a sense of history when he heard a white gunman had killed nine black church members in Charleston, S.C.

“I thought, ‘Man, when are we going to move on from this kind of racism?'”

Smith and others the Post contacted in the African-American community Thursday expressed frustration, sadness and resolve in the wake of the Charleston massacre.

“It lets me know there’s much work to be done,” said the Rev. Tim Bates of Salisbury. “I think about the children.”

Bates, who pastors Cameron Presbyterian and Calvary Presbyterian churches in Statesville, said members at his church’s Bible study Thursday evening were concerned about whether to lock church doors.

Bates said he believed the Charleston church members would have welcomed the young stranger who joined them Wednesday night even if the doors had been locked and he asked to come in.

Bates said his own church might have done the same, he said, “being who we are.”

According to police reports, 21-year-old Dylann Roof sat in on the gathering for about an hour and then opened fire, killing the pastor and eight other people.

Bates said the killings made some want to scream, but he turned to prayer— and then wanted to hug his children and his community.

“God is still in the church. There are a lot of things we will never understand,” Bates said. “Evil is evil.”

Bates said he wondered what got the suspect to that point. And while Bates isn’t advocating more locked doors or rampant paranoia, he said church security cameras helped Charleston Police quickly identify the suspect.

“I’m praying the Lord gives more people discernment to recognize hurt and darkness and speak to it,” Bates said.

Roof declared that he had gone to the church to kill black people, one witness said, revealing a racism that many in the black community believe still runs strong.

Anthony Smith said whites and blacks will have different perspectives on the attack.

To some people, the suspect might look like a loner, acting in isolation, said Smith, pastor of Mission House in Salisbury. But African Americans are attuned to a different history, he said. “We  quickly see a larger society that helps produce a young man. … He didn’t just make this stuff up himself.”

Smith called for blacks and whites to lament together as a community rather than pass judgment on others’ anger — an anger they don’t understand.

“This is a history that’s repeating itself, that’s speaking to us again,” Smith said.

The Rev. Vincent Patrick Jones, pastor of New Zion Missionary Baptist Church on Dunn’s Mountain Road, said news of the killings was “very, very disheartening to the community of faith, in particular.”

Fear may be running rampant throughout South Carolina, North Carolina and beyond, he said, and it’s important for people to know they can go to church and be safe.

“In our mind, church is this place where we come in to get refuge and safety,” Jones said. “… The mood is to pray, to lament, to have righteous indignation.”

Rather than pray for God to do something, Jones said, people should pray that this moment will open a door for them to make the right response and reach out to others.

He said people don’t want to admit that the country has a serious problem with racism.

“We have to ask hard questions and deal with the elephant in the room,” Jones said. “Even with churches in the city of Salisbury, I would love to see pastors and leaders of every church sit down at a massive forum and talk about what’s going on in this city.”

Scott Teamer, president of the Salisbury-Rowan Branch of the NAACP, also decried the killings and called for more frank talk on race.

“I think most people are really hurt,” Teamer said, but they are not surprised by the level of hate.

Teamer was heading to Charleston today to join other NAACP officials. He said the church massacre was tragic, but it might open an opportunity to talk about race before matters get worse.

“We have a problem in this city and it’s time to talk about it on the local level, black and white,” Teamer said. “There’s no point in acting like we don’t have racial issues.”

The suspect in the killings may have acted alone, but the racism he expressed is widespread, Teamer said, and that’s something people need to confront.

“I think that most people are afraid to even start talking,” Teamer said. Black people don’t speak up because they are afraid of what white people will think, he said.

“Look at the violence in our community,” Teamer said. “We have to have a real dialog about these issues.”

He expressed frustration that two young black men were recently killed in one week in separate incidents, and police have made no arrests.

The community also needs to talk about what to do about young people and their need for jobs and opportunity.