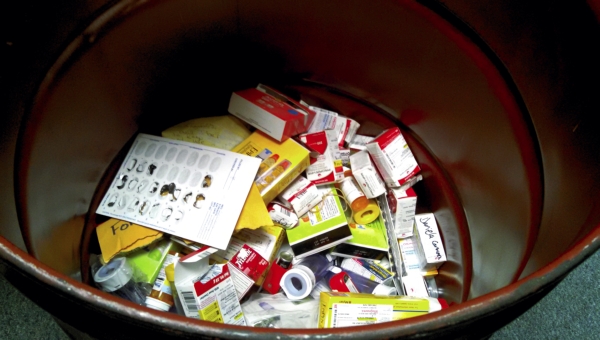 The Rowan Sheriff's Office collected about 300 pounds of medications, inhalers, Epi-Pens, cold tablets and other items from area schools from students who never returned to retrieve them at the end of the school year. The Sheriff's Office has a DEA license to properly dispose of the medications through its Operation Medicine Drop program. Shavonne Walker/Salisbury Post

At the end of each school year, teachers clean their classrooms and students clear out their cubbies and lockers.

The Rowan County Sheriff’s Office has a clean-up job at the end of the academic year, too — collecting medication left at area schools.

It happens at the end of every school year, Ramsey said. Schools are left with medications that students didn’t finish taking and parents forgot to retrieve.

The schools can’t hold onto the forgotten medications, he said. They have to be properly disposed of, and that’s where the Sheriff’s Office comes into the picture.

The Rowan County Sheriff’s Office has a DEA license that allows the agency to dispose of the pills, bottles, liquids, breathing treatments and other items through its Operation Medicine Drop program. Many of the medications are simply allergy pills, but much of what is collected is considered a controlled substance, including low-dose hydrocodone.

Ramsey said employees at each school go through their respective storage spaces to box or bag the items and send them to the Sheriff’s Office. It’s a laborious job, but it has to be done, he said.