Leonard Pitts: In America, there is no sanctuary 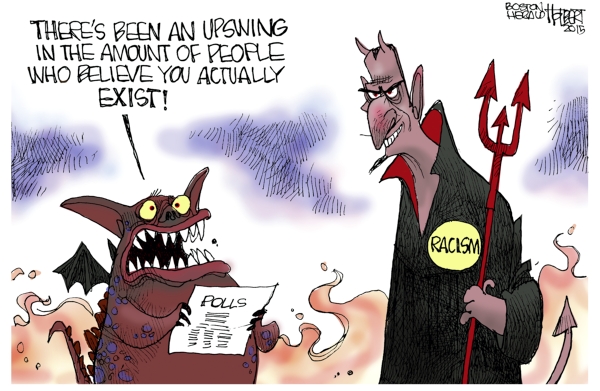 The main hall of a church is called a sanctuary.

Authorities say a 21-year-old white man named Dylann Storm Roof entered the African-American church Wednesday during Bible study, sat with the black congregants for an hour, and then started shooting. Nine people died in the attack, including the church’s pastor, Clementa C. Pinckney, who was also a state senator.

“I have to do it,” Roof is quoted as saying. “You rape our women and you’re taking over our country. And you have to go.”

If there is reason to believe Rev. Pinckney or any of his congregants guilty of raping anyone or plotting to overthrow the government, it has not yet come to light.

But of course, when Roof said “you,” he did not mean “you,” singular. Rather he meant, “you,” plural. “You” people. “You” all. Individuality is, after all, the first casualty of racism.

And indeed, an image circulated after the shooting shows Roof scowling at a camera while wearing a jacket with patches depicting the flags of two famously racist regimes: Rhodesia (now called Zimbabwe) and apartheid-era South Africa. Roof was apprehended the following day not far from Charlotte.

It was to seek sanctuary from people like him and beliefs like his that the church Roof shot up was founded in the first place. Emanuel AME, affectionately called “Mother AME,” was one of the earliest churches of the African Methodist Episcopal denomination, which was started in the late 18th century by black worshippers fed up with the discrimination they faced in the white church. In 1821, one of its members, Denmark Vesey, organized a slave revolt that failed when an informant leaked word of the plot. Nevertheless, the people-traders of the South were galvanized by the audacity of the plan. The church was burned as a result.

It was rebuilt. In 1834, black churches were outlawed in South Carolina. Emanuel went underground until the law was changed. An earthquake destroyed the building in 1886. The church was rebuilt yet again.

Now, there is this.

But one thing, let no one dare to call it, and that is, “surprising.” This attack can be regarded as surprising only by the very innocent, the very ignorant, and those who have not been paying attention.

In the first place, a nation whose gun love amounts to nothing less than fetishism has no right — ever — to describe a mass shooting as a surprise. Indeed, at this point, one is more surprised when the country passes a day without one.

But if the means of the attack is unsurprising, the motive is, too.

There is a myth in this country, a fable some people cherish because it makes them feel good and demands no moral or intellectual heavy lifting. That myth holds that we are done with race and have been for a very long time; that we overcame, learned our lesson, reached the Promised Land and built luxury condos there.

Bill O’Reilly believes that myth. Sean Hannity believes it. Rush Limbaugh swears by it. Indeed, for most of the people who are pleased to call themselves “conservative,” that myth is nothing less than an article of faith.

Let them go to Charleston. Let them visit a church with no sanctuary

For that matter, let them go to Baltimore, let them go to Los Angeles, Chicago, Dallas, Atlanta, St. Louis, Miami. Let them go to any of a hundred cities and talk to black people who are sick of hearing how America overcame, learned its lesson, reached the Promised Land, yet somehow, sister can’t get a loan, dad can’t find a job, brother has to factor stop-and-frisk encounters into his travel time to and from school and Walter Scott gets shot in the back while running away. All for rapes they never committed and government takeovers they never planned.

If what happened in Charleston was extraordinary, and it was, this is the ordinary, the everyday of existing while black that grinds your faith down to a nub and works your very last nerve. Especially when the background music is provided by a bunch of people who don’t know, don’t know that they don’t know, and don’t care that they don’t know, singing operatic praise to a faded myth.

Where, in other words, can we find just a moment to breathe free of this constant onus? Where can we find sanctuary?

What happened Wednesday night at a storied church in Charleston is a painful reminder that in America, no such place exists.

Leonard Pitts is a columnist for The Miami Herald. Email hin at lpitts@miamiherald.com.