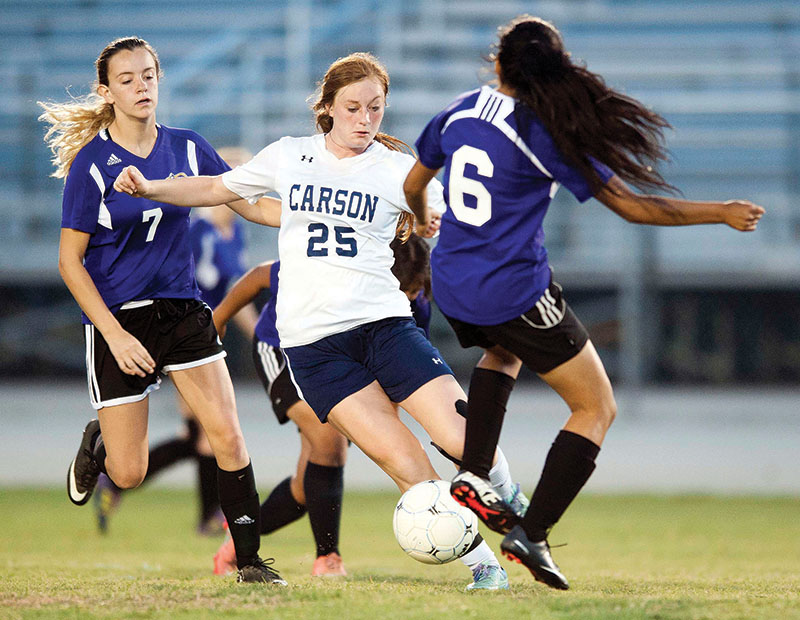 File Photo By JON C. LAKEY / SALISBURY POST Carson’s Cassie Howard (25) brings the ball up field against North Henderson in the first round of the 3A state girls soccer playoffs.Carson lost the game 2-1. It was the end of a career for Howard, the Rowan County Girls Soccer Player of the Year. Her senior season was focused on becoming a leader for a team that started five freshmen and had a roster with its share of underclassmen.

SALISBURY — Six starters were lost from Carson’s 2014 playoff team. Along with that, the Cougars’ 2015 roster featured 11 freshmen with five of them eventually getting the nod to start at some point throughout the season. It’s situations like that where leadership is as critical as the ability to put the ball in the back of the net.

Cassie Howard is accustomed to both. The midfielder led Carson in scoring with 13 goals in 2015 as well as being the third-year captain needed by the youthful squad under the direction of first-year coach Lauren West.

“The whole season was an adjustment but not stepping up to a leadership role because I was used to that already,” Howard said.

Howard, the Rowan County Girls Soccer Player of the Year, knew coming into the season it was necessary for her to continue carrying the load.

“[West said] pretty much that I should have a stronger leadership role, but I’ve kind of always had that role because I’ve been a captain since I was a sophomore,” Howard said. “So I’ve been used to being in that. But [it was needed] even more so this year with a new type of coach. I knew I needed to step up even more and make sure our team and everything else ran smoothly and we got our work done and that we were successful.”

West also knew what was going to be required of Howard for the Cougars to be successful.

“On a team with 11 freshman and replacing (six) starters from last year’s playoff team, Cassie had to shoulder both the leadership and workload of this year’s team,” West said to the Post in her nomination of Howard. “With five of the freshman becoming starting players, Cassie was the engine that made our team go … and when she was absent from the field (Patella Injury) for the last three games of our regular season, her presence was greatly missed and noticeable in the way we played.”

Carson finished third in the South Piedmont Conference behind Hickory Ridge and Cox Mill. The Cougars’ four league losses were to the two teams that finished ahead of them.

Howard, as significant as she was, credited teammates for the roles they played in Carson’s 12-6 season. She said freshmen Hannah Smith and Alisia Lopez-Lara made an immediate impact in the midfield. She was complimentary of sophomore Mia Trexler for her ability to anchor the back line and noted senior Alex Allen making a move to center back.

“We definitely had a lot to fill, and they definitely stepped up,” said Howard, a four-time all-county selection. “I think it’s because they worked so hard in practice, and we really bonded as a team.”

The Cougars didn’t advance as far in the 3A state playoffs as they did in 2014. This year ended with a first-round 2-1 loss at home to North Henderson. It was more about bad luck than it was about skill level. Howard joked she blocked out the memory of the game that ended the season.

“We just didn’t get very lucky,” Howard said. “Sometimes, soccer is about luck. We were the better team, but they just finished more goals.”

It was the last time Howard will play soccer for a school team. She is attending East Carolina to study sports medicine, although she plans to play for the club team.

“I want to focus more on my academics but still have that competitive club soccer that I can play but still get to focus on my school,” Howard said.

When she laces up the cleats for a club team, don’t expect her to not try to take over and be the leader she was for the Cougars.

“I sure hope so,” Howard said with a laugh. “I’m very competitive. So definitely.”