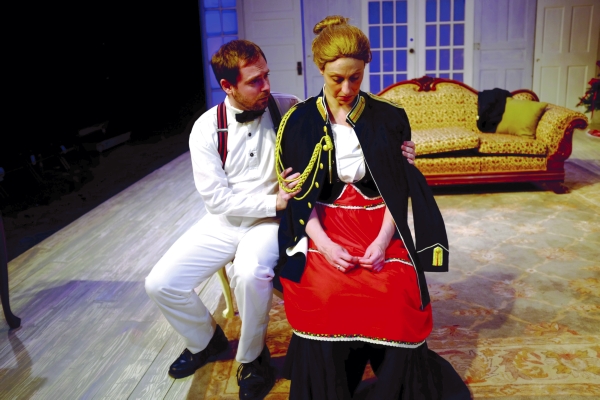 Meredith Fox as Nora and Tim Campbell as Torvald in 'A Doll's House.'

‘A Doll’s House’: It’s time for the doll to grow up

“A Doll’s House” caused a bit of scandal when it was written in 1879. Playwright Henrik Ibsen shockingly proposed that a woman who does not know her own identity cannot be happy.

Nora Helmer, married to the doting Torvald, is at first a silly, playful young woman who’s more interested in herself than anyone else.

Later, she comes to a shocking revelation that greatly upset audiences of the day.

In the St. Thomas Players’ production, Meredith Fox plays Nora as a high strung, impulsive woman who has no knowledge of the real world, nor care to find out.

Tim Campbell’s somber Torvald comes across as a man smitten by her bird-like qualities, which he struggles to keep in check, in spite of his own infatuation.

That this couple produced three children is no surprise. Nor is it a surprise that Nora has absolutely no idea what to do with them or for them. Thank goodness for Anne Marie, Shakeisha Gray, who raises the children based on experience raising Nora.

Nora has a secret — one she’s quite proud of. She brags about it to her friend Kristine Linde, played by Alice Rich with the required subtlety. Kristine, the level-headed one, is appalled at the revelation, but no more so than by Nora’s flippant behavior.

It seems Torvald is not the only one who finds Nora fascinating. Sickly Dr. Jens Rank, played by Seth Labovitz, is devoted to her.

Misunderstandings complicate matters a bit, but the large, threatening complication of Nils Krogstad, played by Brian Rassler, whose presence is aggressive and unyielding, is the catalyst for change.

Nora is so proud she saved Torvald’s life by borrowing a huge sum to spend a year in Italy that she’s not aware of how much she still owes. She doesn’t care. She’s done this wonderful thing.

Well, Krogstad cares a great deal. It so happens he works at the bank which Torvald will soon manage and he fears for a second personal crash of fortune.

He’s got something unpleasant in his past, and now, so does Nora. He feels completely justified in threatening her.

What plays out illustrates the morals and attitudes of that period. Women are possessions. If they do something embarrassing, they are condemned, banished from the lives of their husbands and children.

To Torvald, everything is about morality and standing, about the fitness of a human being to continue in life unblemished and without flaws. Krogstad has already earned his scorn, which will eventually pass to his own wife, or, as he calls her, his child.

Fox smiles, frowns, feigns tears, blazes anger. Almost too much. It’s hard to fathom her transformation in the second part of the play after her willful ignorance in the first part.

Campbell is steadfast and straight-backed, the model of inflexibility. Rich, too, undergoes a transformation, but quietly.

Labovitz’s Dr. Rank is a gentleman in the finest sense, a proud man, but one feels he is not the ramrod dictator his friend Torvald is.

Rounding out the cast is perky McKenzie Eury as maid Helene and Mike Cline as Mr. Berg.

This is not a play for children, although three adorable children are in it, Griffin Gray, Stella Rae Smeltzer and Scotland Dougherty. The baby doesn’t have much to say, but the older children knew all their lines and moved around the set like this acting thing was no big deal.

The set includes a wall of doors, quite interesting to look at, and the obligatory doll house.

Director and designer David Pulliam has taken a different approach here. The first part, which is rather long at 2 hours, is played with a great deal of comedy. And it’s true this bunch does and says some silly things.

The complete change of tone in the second part, which is about 35 minutes, is due to the revelations, but seems almost like a different play as all turn desperately serious and Nora declares and acts on her rebellion.

Still, it’s a good chance to learn something, and to appreciate how attitudes of and about women have changed. One audience member repeatedly remarked on Torvald’s treatment throughout the play — shocking to us now, but standard in the 1870s.

Prepare yourself for an extended evening, but take the time to consider what “A Doll’s House ” has to say, and how bold its statement was more than 180 years ago.