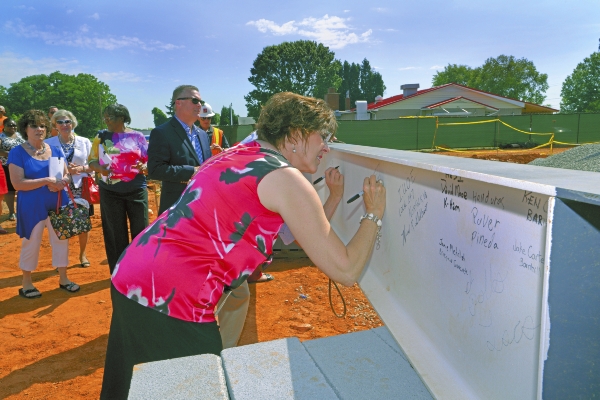 The Rowan-Salisbury School System’s central office is one step closer to completion.

School board members, district administrators, county commissioners, city council members and the Wallace family braved the heat Wednesday for a beam signing and topping out ceremony for the Wallace Educational Forum.

“Today is a significant milestone for us,”Assistant Superintendent of Operations Anthony Vann said. “The last piece of steel has been set.”

Attendees signed the last steel beam before it was lifted into place by a crane and installed at the site in the 500 block of North Main Street. A celebratory lunch followed at Richard’s Bar-B-Q next door.

Construction is slightly ahead of progress, Vann said.

“Things are moving along great,” he said.

The weather has been “ideal” for construction, he added.

“The next step is the slabs for the first, second and third floors,” Vann said.

That portion of the project should be completed by the end of June.

After that, walls will go up, followed by the roof, according to Chad Webb, vice president of operations for Barnhill Construction Co., which is building the structure.

The company hopes to have the masonry started within the next 30 days, and the roof and walls completed by the end of August.

The building is still on schedule to be completed in early February.

“It’s been a big, team approach to this,” Webb said, adding that county and city officials have been extremely helpful in expediting the construction process.

Vann said there haven’t been safety issues or accidents on the site since construction began.

“To us, that’s very important,” he said.

Once finished, the new building will provide a consolidated central office for Rowan-Salisbury School System personnel. In the 26 years since the Rowan and Salisbury systems merged, they’ve worked at scattered sites, including former schools in North Ellis Street in Salisbury and North Long Street in East Spencer.