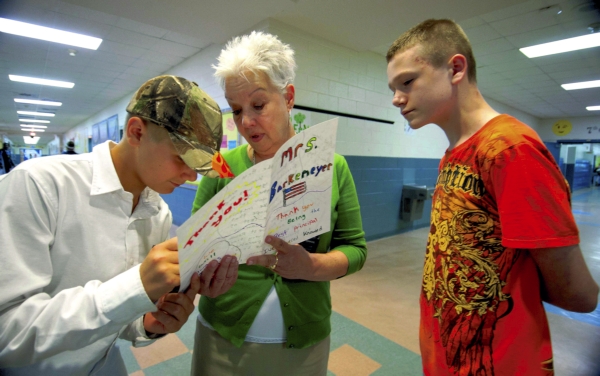 Principal of the Year retires to pursue new dreams After more than 40 years in the education field, West Rowan Middle School Principal Nancy Barkemeyer is moving on to pursue other dreams.

“I’ve been in school or working in school since I was 5 years old,” she said.

She’s spent 25 of those years in North Carolina, and she’s devoted the last seven years of her career to the West Rowan Middle School and the Rowan-Salisbury School System.

Barkemeyer has new dreams to pursue, however, and she’s well on her way to pursuing them.

“I’m taking courses to become a licensed mediator,” she said.

Barkemeyer took the first class because she thought it would be helpful to learn the communication skills and problem solving skills, regardless of her occupation.

“The more I’ve looked into it, the more I wanted to do that,” she said, explaining that she sees it as an opportunity to do something different, but that is still needed.

Barkemeyer expects to receive her license in August after working an apprenticeship.

Once she receives her certification, she’ll be able to serve as a court-appointed mediator or work at a community center.

“It’s an old cliché that we (educators) talk about being lifelong learners,” Barkemeyer said.

Learning a new field is “challenging,” but “fun,” she added.

Barkemeyer isn’t sure if she’ll work part time or full time once she receives her certification.

“We’re going to see where it takes us,” she said.

Barkemeyer said she plans to stay in the area. Originally from Alabama, she’s been in North Carolina for the last 15 years and now considers the Old North State home.

Barkemeyer said she believes her career as a principal has prepared her for this new chapter in life.

“Being a principal – it’s an interesting job,” she said. “Every day is different. Situations are different. You still have to listen to people and understand where they’re coming from.”

Barkemeyer said her last last day of school was harder than she expected.

“It was very, very busy. I thought I had prepared myself for feeling all bittersweet, but I was really more emotional about the last day of school than I thought I’d be,” she said.

The number of cards and hugs her students gave her were overwhelming.

“I just started crying and couldn’t stop,” she said.

Barkemeyer said the thing she’ll miss most about being a principal is “seeing the kids every day and being a part of their lives.”

Even though she won’t be spending her days, nights and weekends in a school building anymore, Barkemeyer is not done with public education.

“It is very important in the state right now for us not to lose the dedicated professionals we have,” Barkemeyer added.

Barkemeyer and her husband Eric have two adult children, Julie and Rich.

SALISBURY — Imagine the challenges Salisbury composer Marc Hoffman faced when he was commissioned to write a piece for the Fourth of... read more