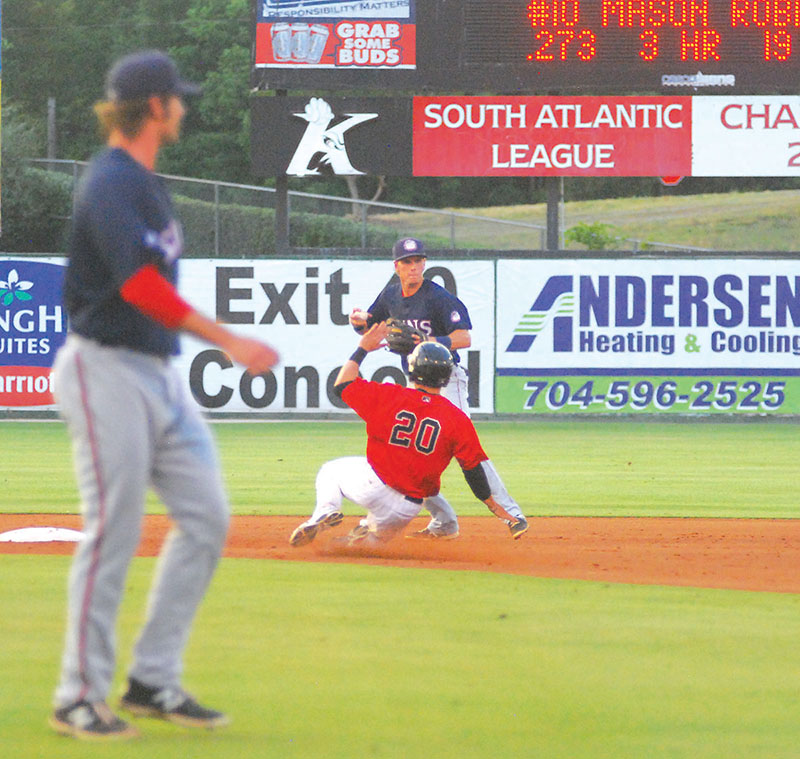 ADAM HOUSTON / SALISBURY POST Kannapolis' Brett Austin (20) slides trying to break up a double play attempt by Hagerstown shortstop David Masters (7) on Wednesday in a South Atlantic League game at CMC-NorthEast Stadium against the Hagerstown Suns. The double play was not successful.

KANNAPOLIS — For all of 10 innings Wednesday, Kannapolis and Hagerstown engaged in an old-fashioned baseball staring contest. In the 11th inning the Intimidators blinked.

The visiting Suns broke a 1-1 tie with three runs in the top of the 11th to hand the Intimidators a 4-1 loss, their third setback in a row. After being held to four singles by Intimidating pitching, the Suns doubled that output in the final frame. A bang-bang infield single to shortstop by Alec Keller started the rally off Kannapolis reliever David Trexler in the 11th.

After a sacrifice bunt by Raudy Read, the Suns took their first lead on a clutch single up the middle by clean-up hitter Jose Marmolejos. Back-to-back doubles by Grant Debruin and Jeff Gardner added insult to injury and expanded the margin to 4-1.

Kannapolis, which had only one base runner over the final six innings, went down in order in the 11th as lefty reliever Jake Walsh earned the save for winner Robert Orlan.

“Our pitchers threw well all night,” Intimidator catcher Brett Austin said. “Trexler had good stuff as well but we had that one bad inning. You just have to tip your hat to Hagerstown for doing a good job of executing late in the game.”

Hagerstown got effective pitching from starter Austen Williams (six innings and one unearned run) as well as relievers Justin Amlung and the two lefties Orlan and Walsh. They combined to hold the Intimidators to the one unearned run on five hits and a combined 11 strikeouts.

The Intimidators scored their only run in the the fourth when Hunter Jones reached on an error and scored on a one-out single by Louie Lechich. It stayed 1-0 into the sixth thanks in part to a pair of double plays by Kannapolis but the Suns finally broke through to tie the score on back to back singles by Read and Brennan Middleton.

The loss dropped Kannapolis to 32-34 in the South Atlantic League while Hagerstown is now 34-32 as they look for a sweep of the three game series at Intimidators Stadium Thursday night at 7:05.

The game was played in 93 degree heat and even featured a brief rain shower at the beginning. Austin noted that the extreme heat during the game and all week is just part of the game and the mental preparation.

“You have just got to mentally lock in and kind of win every pitch,” he said after catching all 11 innings. “You know you are tired but you just have to be mentally tough.”