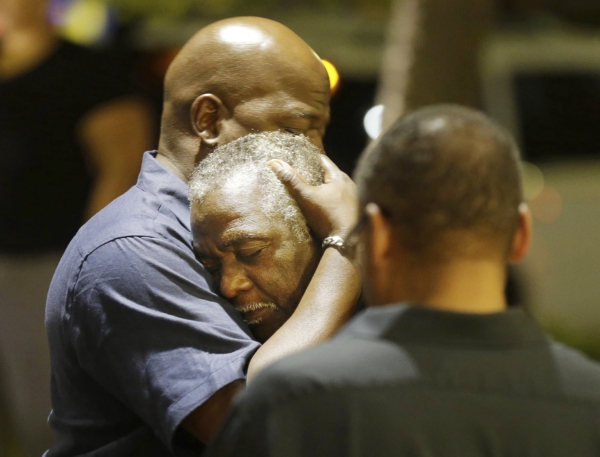 Worshippers embrace following a group prayer across the street from the scene of a shooting at Emanuel AME Church, Wednesday, June 17, 2015, in Charleston, S.C. (AP Photo/David Goldman)

Crowds sang “Amazing Grace” outside Emmanuel AME Church in Charleston Thursday, still stunned by the unthinkable — the slaying Wednesday night of nine people gathered at the church for Bible study.

Through many dangers, toils and snares,

I have already come;

And grace will lead me home.

A young white man who recently received a gun for his 21st birthday is believed to have sat in the church with the group for nearly an hour and then opened fire on the small gathering.

What a despicable, hateful crime. An African American church opened its doors to all, only to see nine of its cherished people gunned down.

This rips at the heart of the entire country and demands justice.

We won’t know the shooter’s full story for some time — if ever. No amount of information could make sense of this crime anyway. One thing is obvious, unfortunately; racism clearly continues to poison our society. The suspect may have acted alone Wednesday night, but he did not grow up in a vacuum or make up racist thoughts on his own. They have a history.

Speaking about the victims, President Obama quoted Dr. Martin Luther King Jr.’s words about the four girls killed in the bombing of a Birmingham, Ala., church decades ago. The victims died nobly, he said, and lived meaningful lives.

If only we could come to some meaningful resolution of the fears and hatreds that lurk beneath the surface of society. It’s time for communities everywhere to come together to grieve this loss of life, this attack on sanctity, this outburst of racism. When will it stop?

Laurels to Food Lion for its Food Lion Feeds program, which just celebrated its first anniversary. So far the program... read more