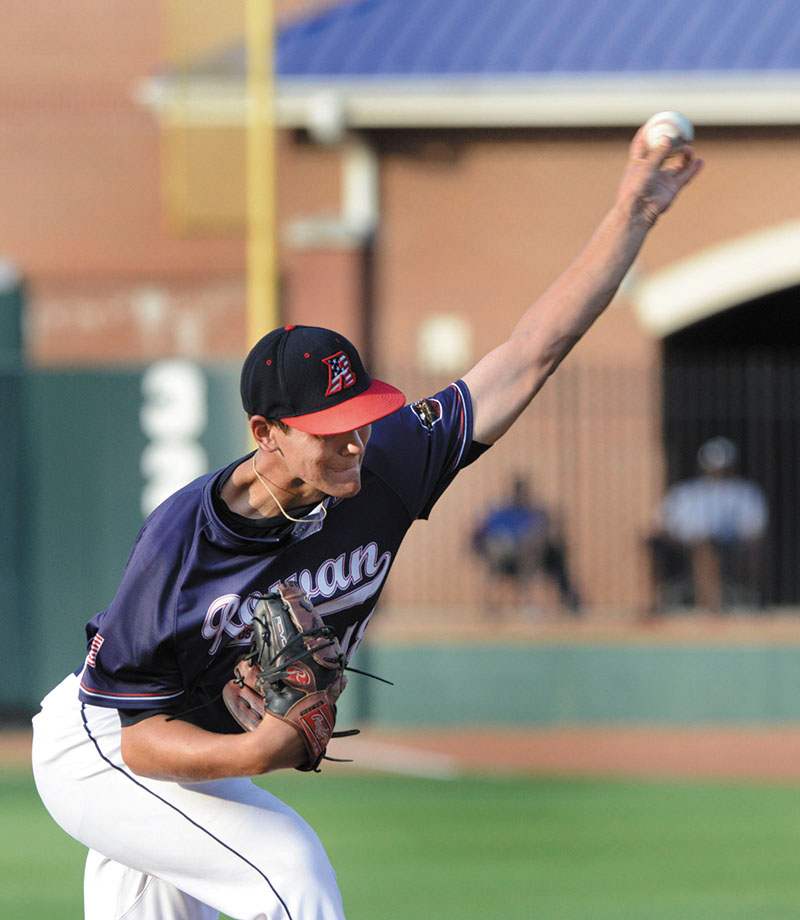 SALISBURY — Complete games just don’t happen in American Legion baseball anymore, but lefty Hunter Shepherd threw one for Rowan County in Wednesday’s 2-1 win against Mooresville at Newman Park.
Shepherd was so good and so efficient he went the distance with fewer than 90 pitches.
“I just went out there inning by inning, and it was working out for me,” Shepherd said. “Our defense was outstanding throughout. I love to hit, but not being in the lineup allowed me to focus on just pitching. It was different — but a good different.”
The plan was for designated hitter Heath Mitchem to take over on the mound in the ninth, but Mitchem walked leading off the bottom of the eighth and spent the whole half-inning on the basepaths.
“Heath had thrown a little, but it was going to be hard for him to get loose quickly, so Shepherd went back out for the ninth,” Rowan County coach Jim Gantt said. “We had Cory Fries ready, but then Shepherd got two quick outs in the ninth.”
Both outs came on extraordinary plays. Third baseman Riley Myers plunged into foul territory like a diver into a pool to glove a bunt attempt. Then Michael Caldwell jumped like he was going up for an NBA rebound and snagged a line drive.
Appropriately, Shepherd handled the final out himself on a comebacker.
Three Mooresville pitchers led by left starter Jake Kaufman slowed down a Rowan offense that had been a juggernaut. The only run in five innings against Kaufman came on one powerful swing by Juan Garcia, who drove a head-high pitch over the left-field wall in the fourth inning.
“I just took my hands to the ball and I pushed through the high pitch and managed to catch up to it and hit it out,” Garcia said.
Shepherd made that 1-0 lead hold up until Rowan County finally made it 2-0 in the seventh. Kacey Otto drilled a leadoff double into the corner in left-field, and Lee Poteat’s grounder moved him to third. With the infield drawn in, Harrison Baucom punched a run-scoring single through the left side.
“I didn’t hit it well,” Baucom said. “But sometimes a lousy single is enough.”
Mooresville, which brought 11 players to Newman Park for the non-league game, broke through in the eighth against Shepherd. With runners at second and third and one out, Caldwell fielded a groundball as Petey Segovia scored from third to make it 2-1. Garcia, the first baseman, took the throw from Caldwell for the second out, and then both Garcia and catcher Dustin Ritchie were surprised to see Mooresville (7-3) trying to score a second run on the play.
“That’s a situation we practice, and I managed to throw the guy out at the plate,” Garcia said.
Garcia’s accurate throw and Ritchie’s tag preserved the one-run lead.
“We took a gamble and lost,” Mooresville coach Robert Little said. “We’d only gotten a few hits, and we had a lefty coming up next. Shepherd was getting all our lefties out. That was our best shot.”
Rowan (10-4) won its eighth straight game and made more special defensive plays than it’s made all season. Myers and Caldwell turned in multiple gems, while left fielder Lee Poteat retreated to the wall to make a fine catch.
“We’ve been winning by getting a lot of hits,” Gantt said. “Tonight we won a different way — with pitching and defense — and that’s a good sign. Shepherd was good. His arm was quick, and he commanded three pitches. He’s been outstanding three outings in a row.”
Rowan hosts the HiToms Scarlets on Friday.