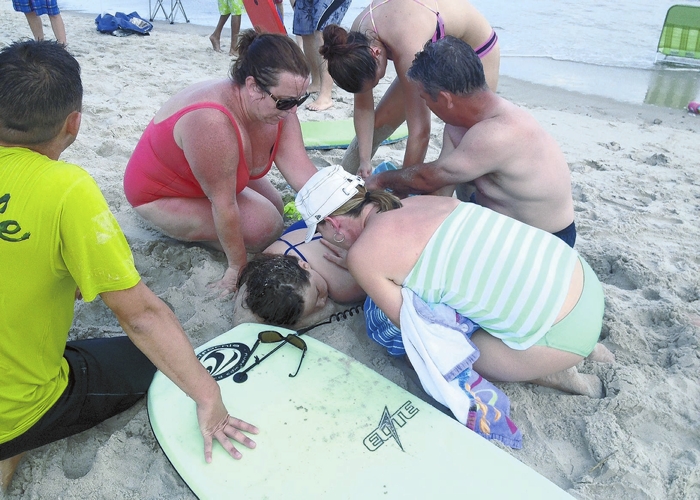 People assist a teenage girl at the scene of a shark attack in Oak Island, N.C., Sunday. AP photo

Shark attacks have hit the North Carolina coast with savage force. Two teens each lost an arm Sunday in separate attacks off Oak Island. Last Thursday a 13-year-old girl was bitten off Ocean Isle, getting cuts on her feet.

Successive attacks like Sunday’s — about two miles and two hours apart — are very rare, according to George Burgess, director of the International Shark Attack File at the Florida Museum of Natural History. Interviewed by the Wilmington StarNews Online, Burgess said he had seen only two cases of successive shark attacks in his 40 years of studying the animal. One case was  in Florida 15 or 20 years ago, and the other was in Egypt in 2010.

Perhaps that is why Oak Island officials did not sound the alarm across all its beach area after the first attack on Sunday. The girl involved in that attack, a 12-year-old from Asheboro, was swimming near a pier where people sometimes fish for sharks, according to one report.   The 16-year-old boy bitten later in the afternoon evidently had not heard of the first attack.

North Carolina has had only 25 shark attacks since 2005, none of them fatal. Sunday’s victims owe their lives to people on the beach who quickly stanched the flow of blood and got help.

Oak Park officials were defending their response Monday, pointing to the rarity of successive attacks. They have declared the area safe but advised people to be “a little more beach oriented.” That’s an oddly roundabout way of saying “stay out of the water.” Avoiding deep water is not enough; the teens in Sunday’s attack were in only waist-deep water.  One of Discovery.com’s 20 tips for avoiding shark bites includes this: “Sharks are creatures of habit. Do not swim in areas where a shark attack has recently occurred, since the same shark, or others, may still frequent the spot.” Lightning might not strike more than once, but sharks do.