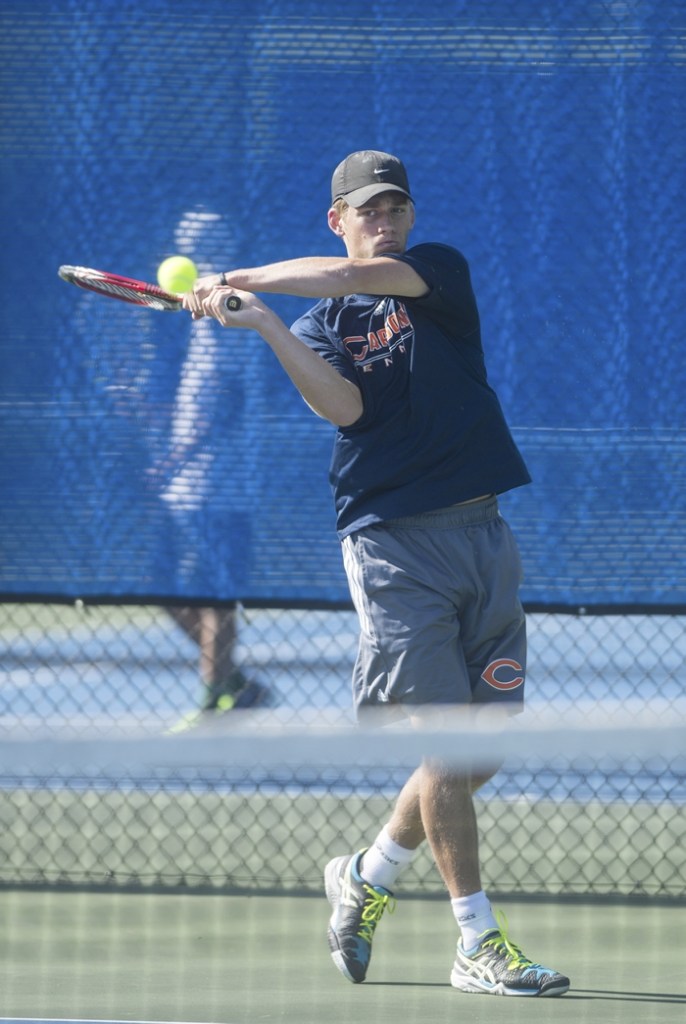 PJ Ward-Brown/Asheboro Courier-Tribune Carson's Marshall Wood, returns the ball against Marvin Ridge's George Lovitt in the NCHSAA 3A Midwest Regional semifinals at the Asheboro Tennis Center in Asheboro on May 2.

SALISBURY — The season was about proving something for Carson’s Marshall Wood. The senior had to fight his way back from an injury in 2013 to show people he is the best boys tennis player in Rowan County.

“It was kind of my last time to show what I had after I had proven to be weak at a time,” Wood said.

There was a time Wood didn’t know if he was going to be able to play tennis again. It was his sophomore season, and Wood was had been diagnosed with spondylolisthesis.

“That was exactly the fear,” said Wood, the Rowan County Boys Tennis Player of the Year. “I really didn’t want that to be the case, and, fortunately, it wasn’t. I worked hard to make sure that it wasn’t the case.”

Spondylolisthesis is a condition where one vertebrae slides over the vertebrae below it, often occurring in the lumbar region. Wood still has a few hairline fractures in his L4 and L5 vertebrae. He said those will never go away although, to avoid further injury, he needs to keep the muscles in his core and lower back strong.

“That’s pretty much the deal with my back,” Wood said.

The rehabilitation process not only worked to strengthen his lower back but also the gluteus muscles and hamstrings. Wood also sought treatment through acupuncture.

“It was crazy stuff,” he said.

All of that was done to avoid surgery.

“It was one of the options, but we opted out of that because that would have just taken me out for a lot longer,” Wood said. “That would have been pretty bad.”

Wood had a stellar junior season, going 7-1 in South Piedmont Conference matches in 2014 and playing in the 3A Midwest regional doubles tournament.

Fast forward to February. Wood signed to continue his tennis career at Catawba College. Catawba coach Jeff Childress said in November that Wood improved as a player while getting stronger and faster, all of which will help him at the next level.

Putting his name on a National Letter of Intent was the beginning to a good senior season. Wood went 16-3 overall. He was undefeated against opponents from Rowan County and the South Piedmont Conference. He finished in the top four at the 3A Midwest regional tennis tournament and earned a spot in the 3A state tournament.

“Then I got my butt whooped,” Wood said.

Wood’s run at a state title ended well short of what he wanted with a straight-sets loss in the first round to Charlie Schults from Gastonia Forestview. Wood won only three games in the match. Wood said Schults played a good match but didn’t feel he was at his best that day in Burlington.

It wasn’t how Wood wanted to finish, but that doesn’t mean it wasn’t a successful season.

“Senior year was pretty eventful,” Wood said. “I feel like it was my strongest year for high school tennis. I also worked pretty hard. But I got the best results I could have gotten.”