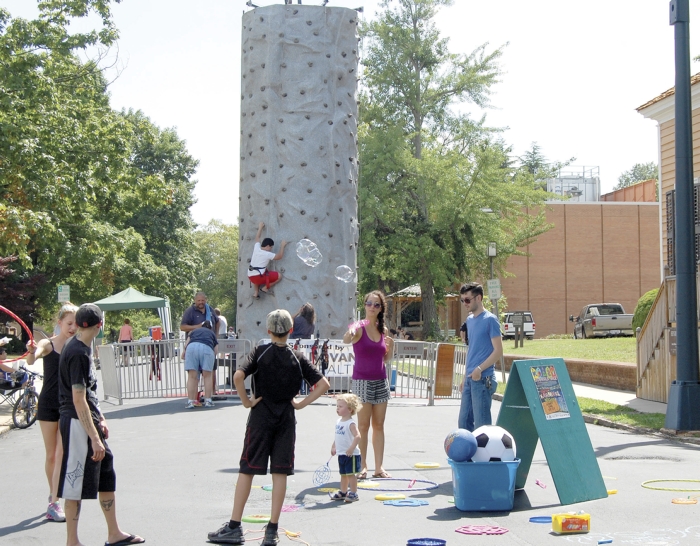 Streets Alive took place Sunday afternoon in downton Salisbury. The streets around the Rowan Public Library were closed to traffic so people could use them for other activities.

It wasn’t too hot for the streets to come alive Sunday afternoon in downtown Salisbury.

Rock climbing, bike riding, bubble making and relaxing in the shade were just some of the things happening on the block around the Rowan Public Library as the temperature exceeded 90 degrees during the city’s second Streets Alive event.

Streets Alive is a version of the Open Streets Project. The event temporarily closes streets to all car traffic so that people can use them for other activities. Church, Fisher, Jackson and Bank streets around the library were closed Sunday from 2 p.m. to 6 p.m.

Sisters Maggie and Kahlil Cross were weaving in-between cones and going over ramps on their bicycles. A obstacle course for bikes was on Church Street. The girls’ parents, Chad and Shelley, said Streets Alive is a good event.

Chad said the family does a lot of bike riding, but normally sticks to the sidewalks due to the lack of bike lanes in the city.

There was plenty of bike riding going on at Streets Alive. Skinny Wheels Bike Shop partnered with Downtown Salisbury Inc. to put on the event.

Zevph Page was spinning round and round making bubbles. A young boy played cornhole, also called “bags,” which involves two inclined boards placed on the ground about 20 feet apart. People try to toss bags onto the board or through a hole at the top of the board.

Girls from the Steppin’ Out Dance Company were dancing to the beat. And there were vendors of all sorts. Evelyn Medina, owner of Mean Mug Coffee on North Fulton Street, was making samples of her “50-50 bar” smoothie, which has carrots, oranges and vanilla.

Dennis Sipp, owner of Health Solutions Unlimited, had his pineapple upside down cake at his tent.

“Cooks in six minutes,” he said.

Michael Decker, wearing stripped sunglasses and a shirt with American flags on it, was sitting in a chair on the sidewalk under the shade of an umbrella with red and white stars on it. He has been making balloon art for 4o years and is a world champion in the trade.  He said Streets Alive is a good thing, but that it may be better to hold it in late September or early October when the weather is cooler.

Her mom, Shannon, said Streets Alive is a great event.