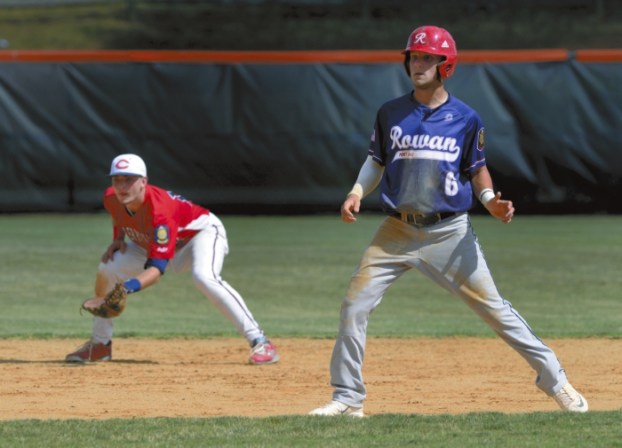 SALISBURY — Rowan County’s 2-4 start to the American Legion baseball summer has been forgotten, buried under an avalanche of singles, most of them with two men out.

Michael Caldwell had three hits and three RBIs as Rowan County handled Kernersville, 9-5, at Newman Park on Monday night, its seventh straight victory.
Heath Mitchem, Hunter Shepherd, Juan Garcia and Lee Poteat had two hits each. In all, Rowan had 14 hits and everyone in the lineup is batting over .300.
“We looked like a team that hadn’t played for 11 days,” Kernersville coach Chad Loflin said with a sigh. “But Rowan really played well and played a lot better than us. They’ve got disciplined hitters.”
Kernersville has only three players back from last summer, but it’s still Kernersville (6-5, 1-1), and wins against that bunch have not come easily for Rowan County over the years.
“They kept coming at us all night,” Rowan coach Jim Gantt said. “They put the ball in play and every time we made a mistake they took advantage.”
Rowan County (10-4, 5-0) beat a top-flight pitcher. Matthew Hailey, who went 8-1 at East Forsyth High and is headed for Belmont Abbey, had not allowed an earned run in 13 innings and had fanned 20 while walking none before Rowan banged the ball all over Newman Park against him.
Rowan County pieced it together on the mound. Riley Myers (2-0) made it through five trouble-packed innings to earn the victory. Myers allowed three runs. He escaped a bases-loaded, one-out mess in the fourth inning and stranded a runner at third base with his final pitch in the fifth.
“Riley couldn’t find his curveball, but he competed,” Gantt said. “He’s just got to do a better job of not letting them know he can’t find his curveball. He kind of wore that on his sleeve.”
Noah Jarrett pitched the sixth inning before running into a jam in the seventh. The bullpen combination of Alec Hamilton, John Owen and Mitchem got the last eight outs.
Rowan put together four straight hits in the bottom of the first — by Caldwell, the red-hot Garcia, Mitchem and Dustin Ritchie — to take a 2-1 lead.
“It’s about time I got hot,” Caldwell said. “I was struggling at the start of the season, but I’m starting to get a feel for hitting again.”
Caldwell, the 2014 Rowan County Player of the Year, didn’t play a lot at Pitt Community College this season, so he’s had to shake off some rust.
It was 3-3, heading to the bottom of the fifth inning when Rowan took the lead for good on run-scoring singles by Caldwell and Garcia and Mitchem’s sacrifice fly.
Hits by Poteat and Caldwell keyed a three-run sixth that gave the home team a 9-3 cushion.
“Lee did a great job as a table-setter tonight in that No. 9 hole,” Caldwell said.
Rowan nearly turned it into a blowout in the sixth, but a fine play up the middle by shortstop Jacob Nestor on a ball stung by Garcia, kept Kernersville’s deficit at 9-3.
Hamilton, a submariner, entered the game in a tough situation with Kernersville fighting back in the seventh inning. He relieved Jarrett with the bases loaded and one out, and Kernersville quickly made it 9-4 on an infield hit that traveled 10 feet and 9-5 on a walk. That brought the tying run to the plate.
“Walks were killing us,” Hamilton said. “I just had to really go after the next guy and I was able to get a ground ball right to (shortstop Jeremy) Simpson. That let our great defense go to work and we turned the double play we needed.”
Owen had a 1-2-3 eighth inning with the help of a diving play by Caldwell at second base and got a double-play bouncer — Rowan’s third — in the ninth frame. Mitchem nailed down the final out.
Gantt said Rowan’s surge isn’t an accident.
“It’s a good group of guys with good personalities,” he said. “They’re showing up at 2:30 for 7 o’clock games and putting in a lot of work. You’ll take your chances with guys like that.”
Rowan hosts Mooresville on Wednesday in a non-league game.

From staff and wire reports The Kannapolis Intimidators jumped in front before rain fell and held on for a 3-2... read more