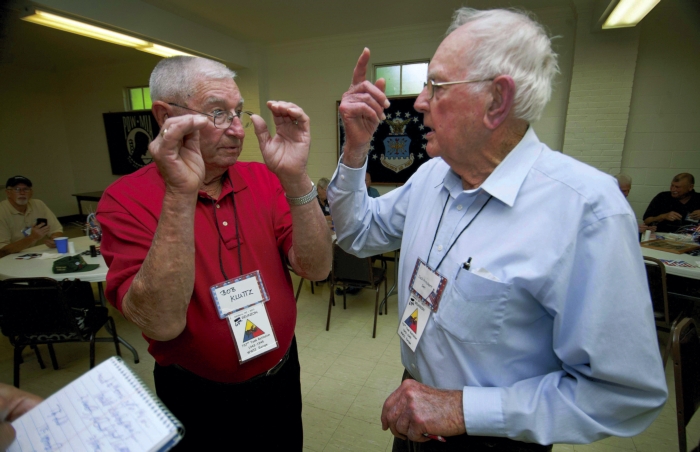 JON C. LAKEY / SALISBURY POST Bob Kluttz (left) and Jack Pritchett recall some of the war stories that they experienced as teenagers off fighting Hitler's armies in Europe. The 737 Tank Battalion, known as Patton's Spearheaders, gathered for the 68th reunion of the battalion in Faith, NC. Three of the World War II veterans attended the reunion. Thursday, June 11, 2015, in Faith, N.C.

FAITH — Bring up their training at Fort Lewis, Wash, or their 12-day, sickening trip across the rolling ocean to Europe. Ask them about landing at Normandy a month after D-Day and trying to get out of “the Hedgerows.”

Mention any of these things, and Jim Deal, Bob Kluttz and Jack Pritchett become animated, maybe even a bit younger.

For Kluttz, it’s hard to forget the frostbite, for which his feet still pay a price today. Deal feels in his hands the force of firing the big gun from inside his Sherman tank. Pritchett’s stomach still tightens when he thinks about the 737th Tank Battalion rolling up to the horrors of a German concentration camp.

The men talk about their tank battalion’s crossing of the Moselle River, when Patton looked on the scene and said, “That’s the way tanks should fight.” It was Patton who lauded the 737th battalion’s assault crossings of the Sauer and the Rhine and swore the men and their tanks had webbed feet.

“You’ve seen ‘Patton,’ haven’t you?” Kluttz asks with a twinkle in his eye about the movie. “That was my tank.”

It’s difficult to say with any accuracy how many members of the Army’s 737th Tank Battalion — “Patton’s Spearheaders” —  are left. But they’ve known for a long time the war they’re fighting now is one of attrition.

Deal, 92, and Kluttz, 91, are from Rowan County; Pritchett, 92, is from Alabama, having made the trip by car with his son, David, and granddaughter Jordan.

Pritchett’s best friend from the 737th, Newling Richey of Greensboro, died back in 2013. After the war, their families often spent vacations at each other’s homes.

At the 2013 reunion in Salisbury, Leo Showfety — the secretary-treasurer and the glue credited for keeping the battalion reunions going — died in his sleep at the Hampton Inn, never making breakfast on the Sunday departure day.

Only eight days ago,  George Henry Kluttz Jr. of Rowan County passed away at age 92. He also was a member of  the 737th Tank Battalion, serving in Co. D. Charlie Hopkins, another battalion member, resides at the N.C. Veterans Home on the Hefner VA Medical Center campus.

Deal visited Hopkins recently, and he said his old friend — not only were they in the same Army battalion, but they worked together at Spencer Shops — did not know who he was.

This also is the first of many years Polly Deal, Jim’s wife, could not attend. She died earlier this year, and Jim says the love of his life is in a better place.

The reunions started with a cookout in Greensboro in 1947 and the first few gatherings were men-only. But wives and families soon became involved and many of the children and grandchildren of the 737th grew up going to the reunions held in North Carolina, Virginia, Georgia, Tennessee, Alabama, Washington State and Kentucky.

The late Showfety’s daughter, Brenda Henderson, was one of the 32 people attending this year’s reunion activities. He would have loved being here, she said, but she also deflected the notion that he deserved all the credit for having kept the reunions alive.

“They all had something to do with it, or they wouldn’t still be meeting,” she said at Thursday night’s opening dinner, hosted by the ladies auxiliary of Faith American Legion Post 327.

Preparations for these last three annual reunions in Rowan County have fallen to Deal’s daughter, Melissa Waller, and his granddaughter, Jordan Waller Johnson. Activities taken in by the “Tank Kids” included Thursday night’s dinner, catered by Debbie Suggs; a Friday lunch and ice cream; cornhole games and watermelon at Deal’s home Friday afternoon; a trip to the tank museum in Danville, Va. Saturday; and a Saturday evening meeting and dinner.

Faith Ladies Auxiliary President Eva Millsaps, known for her beautiful voice, entertained the reunion participants with a few songs Thursday night. She also said how happy she was these war heroes could meet in fellowship at the Faith Legion hall for a third straight year.

Millsaps said was confident the children and grandchildren of the men of the 737th Tank Battalion would keep their legacy alive.

“I know the group is getting smaller,” Millsaps added. “so let’s remember those who couldn’t be here tonight.”

Here’s a summary of what the 737th Tank Battalion accomplished.

Military records show the battalion spent 299 days in actual combat, starting with its landing at Omaha Beach July 12, 1944. It saw some of its fiercest action in the Battle of the Bulge.

The battalion lost six officers and 58 enlisted men in action. In addition, an officer and 20 enlisted men were reported missing. The battalion’s men received 400 Purple Hearts, 22 commendations, the President’s Unit Citation and the French Croix de Guerre with Silver Star.

In past reunions, the men’s stories touched on living and praying in foxholes, catching glimpses of Patton, being knocked off tanks by exploding shells nearby, wearing handed-down leather helmets from high school and college football teams, driving tanks over pontoon bridges and recuperating in French and English hospitals.

Bob Kluttz, a tank gunner in Co. A., said none of the tanks he was in were ever lost, though he saw a German Tiger, with its 88 mm cannon, take out tanks in front and behind his.

Kluttz said he wore out two 75 mm cannon on his own tanks before freezing his feet and being sent back to an English hospital for three months with frostbite.

Deal had shrapnel rip into his legs when he tripped on a land mine.

Pritchett had to drive a 15-ton Kenworth truck onto the battlefields to tow away disabled tanks. “I’m sure I pulled a tank of Jim’s that got knocked out,” Pritchett said.

He often teamed up on those wrecker missions with his buddy Richey, a tank mechanic who had been trained at Fort Knox. “If I had to have any help, I would use him,” Pritchett said.

Heading for Europe on Feb. 12, 1944, the men were part of the youngest tank battalion to leave the United States during the war. The battalion was Southern-flavored, to say the least.

Most of the N.C. recruits came from the Salisbury, Fayetteville and Hickory/Valdese areas. Rowan County alone had 32 men in the 737th. Deal said they were all raw youngsters who needed that year’s training, which included maneuvers in Oregon and artillery firing in Yakima, Wash.

They were forced to use much of the leave they had coming on the long cross-country trip from Fort Lewis to the East Coast. Their staging area before heading off for Europe was Camp Miles Standish, between Boston and Providence, R.I.

The battalion had additional tank training at the Arbury Park estate in Warwickshire, England, before eventually landing in Normandy July 12-13, 1944, and immediately confronting a landscape hedged in and mined.

From there, the game — the end game — was on all the way to Germany.

After the war, Bob Kluttz returned to North Carolina and tried working briefly for the railroad. “I about got killed three times in three weeks,” he said of his brief railroading days. Kluttz quit and fashioned a long career as a brick mason and contractor. He retired in 1983.

Pritchett retired after 32 years with NASA in Huntsville, Ala., working in the space agency’s manufacturing and engineering department.

Pritchett attended that first tank battalion reunion in 1947, and he can’t explain why, but he just thinks he needs to attend every year that he’s able.

He enjoyed hearing Thursday night that Kluttz and Deal have been chosen as the grand marshals for this year’s Fourth of July Parade in Faith.

Deal said he was asked whether he wanted to ride in a military vehicle during the parade or in a convertible. To Deal, the choice was easy.

He wanted the convertible. It makes sense, given all that time he was stuck inside a Sherman tank.