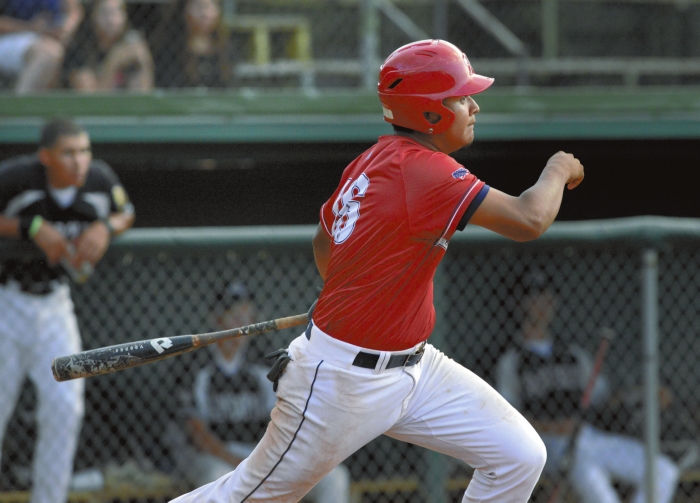 SALISBURY — Rowan County got the breaks and it was hard to put the brakes on the home team’s offense in a 13-6 victory over Winston-Salem on Sunday night at Newman Park.
Rowan’s offensive onslaught was keyed by a string of two-out hits in the bottom of the second inning. It was 2-2 on the scoreboard at that point, and Rowan had two outs and no one base.
“Even with two outs everyone on this team is looking for a way to get on base,” said Rowan County third baseman Juan Garcia, who had four hits and five RBIs. “Everyone was seeing the ball. Everyone had a good approach.”
Hunter Shepherd singled to start the rally. Then No. 9 hitter Kacey Otto singled for the first of his three hits. When Harrison Baucom also singled, the ball was hit so crisply that coach Seth Graham reluctantly held up Shepherd as he arrived at third base.
“I think I probably would’ve sent the runner there because how many two-out hits can you expect to get in one night and we’d just gotten three in a row,” Rowan head coach Jim Gantt said. “But Shepherd would’ve been out at home. It was a great call to hold him.”
It became an even greater decision to hold Shepherd when Michael Caldwell’s blooper fell in center field, and Rowan had two runs for a 4-2 lead. Then Garcia drilled a two-run single to drive home two more — Rowan’s fifth straight two-out hit — and it was 6-2.
Riley Myers nearly made it six straight hits, but his liner to left was caught on a dive.
The first-place team in the Area III standings, Rowan (8-4, 4-0) went on from there.
“You can’t get into a scoring contest with them,” Winston-Salem coach Mike Lovelace said. “They swing the bats. They put pressure on you on the bases. That second inning with all those two-out hits … that got them going.”
Rowan County starting pitcher Omar Bautista, 9-1 in the prep season for West Rowan, was not sharp.
Rowan County was down, 2-0, after the top of the first inning, but Juan Garcia, who powered four homers for West Rowan, launched his first American Legion homer with Caldwell on base in the bottom of the inning to knot the score.
“I was just hoping their pitcher would make a mistake and he did,” Garcia said. “He left one hanging for me.”
A three-run third frame that started with a walk and a hit batsman got Winston-Salem right back in the game and cut Rowan’s lead to 6-5. The key moment was a ground ball that looked like a double play when it left the bat. Instead it took a weird hop past Caldwell, the Rowan second baseman.
“He hit a change-up off the end of the bat and it had funny spin on it and I over-ran it,” Caldwell said. “But overall, we played pretty well. I played a lot against Garcia and Bautista when I was at East Rowan, and it’s just nice to have them as teammates. They’re a dynamic duo for us.”
Heath Mitchem’s double to the centerfield wall started a two-run third inning for Rowan. Otto’s two-out hit made it 8-5.
Bautista’s finest moment came in the fifth inning when Winston-Salem had two on and two out and had the tying run at the plate in Brodrick Rierson.
“Omar was struggling some with the heat,” Garcia said. “His hands were sweaty and he was having trouble gripping the ball.”
Gantt made a mound visit. After a conversation, Bautista gathered himself behind the mound and then got the game’s biggest out on a routine fly ball to right.
“Omar made some quality pitches,” Gantt said. “If he wasn’t good, he wouldn’t have gotten out the hitters he got out. He also helped himself with his fielding on come-backers.”
Rowan put the game away in the bottom of the fifth with five more runs. Two errors helped. Otto and Garcia had hits, and Mitchem sent a two-out, two-run single skipping up the middle.
Tyler Scruggs pitched the sixth frame for Rowan and allowed one run.
Bryan Ketchie entered in the seventh inning and shut down Winston-Salem for three innings for a save.
“(Catcher, Dustin) Ritchie did a great job working with Ketchie,” Gantt said. “They had some great pitch sequences and got outs with his changeup.”
Ben Casstevens pitched well in the late innings for Winston-Salem, which hadn’t played in eight days. He got out of jams with two double-play grounders.
“We came here shorthanded with seven guys missing and five starters out,” Lovelace said. “We had a bunch of pitchers in the field and we made too many errors, but we fought.”